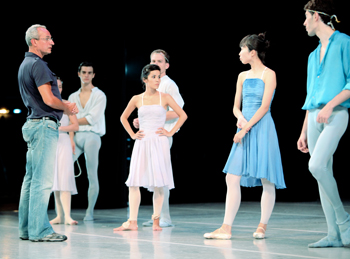 Bulgarian-born, D.C.-based choreographer Vladimir Angelov, seen with the National Ballet of Mexico, created Dance ICONS to serve as a virtual clearinghouse for choreographers around the world.

Choreographers all over the world will now have one virtual clearinghouse where they can network for jobs, find grants and even learn new dance techniques.

The recently launched International Consortium for Advancement in Choreography (also known by its moniker, Dance ICONS), founded by veteran choreographer Vladimir Angelov, is “the first and only global [digital] network that will serve choreographers of all genres, all nationalities and all levels of experience,” Angelov told The Washington Diplomat.

“This one-of-a-kind global network will provide essential information, including a database of residencies, festival announcements, commissioning opportunities, educational resources for the rising young dance maker and mentoring opportunities for leaders in the dance field,” he said.

A Bulgarian native who now resides in D.C., Angelov has choreographed works for the Kirov/Mariinsky Ballet, Tokyo City Ballet, National Ballet of Mexico, Ballet Arizona, San Francisco Ballet, Richmond Ballet and the Washington Ballet. He graduated from the National Ballet School in Sofia and completed his master’s degree in choreography at American University in D.C.

Angelov’s newly formed group estimates that there are some 500,000 or more choreographers around the world, specializing in everything from professional ballet companies and sports team cheer squads to hip hop and Zumba. Angelov said he saw an informational and networking gap for choreographers and wanted to fill that void.

“Choreographers don’t have a way to connect with each other,” he said. “There’s an organization for dance teachers, an American Guild of Musical Artists, but there’s no global organization committed to choreographers. Italy, Bulgaria and Israel have associations for choreographers, but the U.S. doesn’t have one. I decided to start one and make it international.” 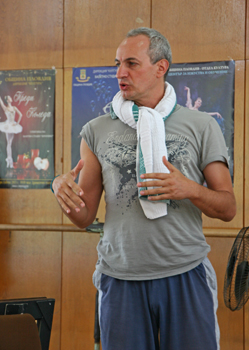 Dance ICONS will have multiple components, he explained. The first will be a database of national and international choreographers with names and contact information. The second will be an online newsletter listing activities, such as residencies and creative opportunities, information on grants, books, videos, links and showcases of new talent, trending choreographers “pushing the envelope” and other features.

The third component will be a weekly live webinar, in which a master choreographer will mentor young choreographers on the art form.

“Right now there is a gap between young and established choreographers,” Angelov said. “We’d like to have a platform where, for example, Dance Place [a notable D.C. dance performance, rehearsal and training facility] would invite a famous choreographer to set up a classroom with about 20 young choreographers and teach choreography. This would be videotaped and put on our website. Ultimately, we would be able to have members watch these classes live. We have been negotiating with the private sector and universities to do this.”

Finally, Angelov said he would like Dance ICONS to be a venue where choreographers can dissect their craft.

“People have dance competitions, but how do you know if dance is good?” he said. “What is the measurement of excellence? There’s nothing for people to look up the steps for judging. This may be a new market opportunity to help establish standards of excellence.”

Dance ICONS, though in its early stages, already has partnerships and representatives from more than a dozen countries, including Brazil, the Philippines, Israel, South Korea and France. An online GoFundMe.com campaign has raised more than $10,000 for the organization’s initial start-up costs.