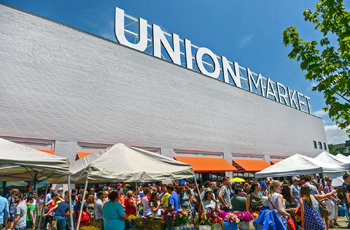 If you want to see what gentrification looks like in Washington in 2016, take a ride over to the intersection of Florida Avenue and 5th Street in Northeast.

There, on a long-blighted parcel of land just behind some dilapidated warehouses abutting Gallaudet University, is the gleaming Union Market food hall, where more than 40 local vendors hawk products ranging from artisanal olive oils and cheeses to handmade pasta, prime cuts of meat and craft beer and wine. If you’re making dinner for friends and want to impress them with quality ingredients — and don’t mind paying top dollar — it’s a great place to shop.

But Union Market, which opened over three years ago, is also a pretty good place to eat, as we discovered on a series of recent visits. The airy, sun-drenched space anchors a 45-acre complex that will eventually be the site of a boutique hotel and hundreds of new condos and apartments. But for now, the market is the main attraction, with numerous food stalls and several sit-down eating establishments including the Rappahannock Oyster Bar, Bidwell and Buffalo & Bergen.

On a recent sunny Saturday morning, we ambled up to the market and past an exterior that offers visitors tables to sit and chat, as well as a meeting place for dogs on a large swath of artificial turf. The festive atmosphere also includes a small trailer from which you can purchase beer and wine. Once inside, we skipped the long line for coffee at Peregrine Espresso — although the aroma was tempting — and focused on our priority: finding the most delicious food.

After a quick stroll around the complex, we settled into one of the barstools at the Buffalo & Bergen counter. Named for a 1930s-era soda counter in Brooklyn, Buffalo & Bergen is situated along the northwest corner of the market and serves as a prize perch for people watching. On our visits, Union Market’s clientele seemed to be a mix of locals and out-of-towners, along with a smattering of urban hipsters and students from nearby Gallaudet, America’s largest school for the deaf. We found the place pulsing with energy at all times of the day.

Buffalo & Bergen serves up a unique if limited menu featuring knishes — a Polish dish of dough stuffed with potato, onion and other ingredients — and bagels, either in the breakfast form or as lunch sandwiches. Buffalo & Bergen also sells alcohol (thumbs up for a tangy, tasty bloody mary) and sodas concocted with homemade syrups.

Buffalo & Bergen distinguishes itself with excellent bagels, which for some reason have long been hard to find in Washington. Gina Chersevani, who co-owns Buffalo & Bergen with partner Jamie Leeds, orders her bagels made in New York with the secret ingredient being New York water. The doughy orbs are shipped to Union Market, where Chersevani’s crew bakes them in-house. Seems like a hassle, but it works.

Our “everything” bagel — served toasted with jalapeno cream cheese and crispy, crumbled bacon — was near flawless. It was slightly crunchy on the outside and dense and chewy on the inside. There are other breakfast/brunch options at Union Market but if you’re looking for a quick, satisfying bite, the bagel sandwiches at Buffalo & Bergen — if you can get a seat — are a good bet. 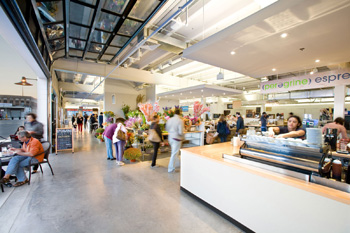 If you’re looking for a more expansive and adventurous lunch or dinner, I’d suggest a multicourse meal utilizing two or three of Union Market’s food counters. Returning a few days later for lunch, we surveyed the offerings again and spotted Soup Up, which makes all of its soups without dairy, butter, oil or added salt. Despite the absence of these flavor-enhancing but health-diminishing ingredients, we found both of our soups — a beef stew and a vegetable and turkey sausage concoction — hot, hearty and tasty. They are also pricey, starting at $8 for a small soup. Two soups — a small and a medium — came to almost $18, but even the small size is hearty enough to put a good dent in your hunger.

After warming up at Soup Up, we ventured to the more moderately priced DC Empanadas counter and tried the “Badass,” a buffalo chicken and blue cheese combo, and the “El Greco,” filled with spinach, feta cheese and onion. The empanadas — pastries stuffed, folded and fried to a golden brown — were fresh out the fryer and not unpleasant but not exceptional. The “Badass” didn’t quite live up to its spicy billing. The “El Greco” was better but could have used more feta. Both were perfectly cooked, however. This is a good option for a filling, inexpensive snack.

After our Latin experiment we headed over to the Mediterranean — DC Mediterranean specifically. Here we experienced our first significant culinary stumble at Union Market. Our order of chicken shawarma — grilled meat wrapped in a pita of sorts — was lukewarm and practically flavorless. The chicken had no characteristics of having been grilled and instead tasted oddly boiled. We didn’t finish it.

While the shawarma disappointed, DC Mediterranean’s baba ghanoush was excellent, with a pleasantly creamy eggplant consistency and plenty of garlic. The baked pita chips for dipping were also outstanding — crisp and savory. We’d suggest sticking to the appetizers at this counter.

A week later, we tried dinner at Union Market and found our best meal yet. On previous visits, I’d been eyeballing Cucina Al Volo, an Italian counter that offered a selection of fresh pasta, including pappardelle and fettuccine with a choice of sauces such as wild mushroom, lobster and shrimp, pesto, duck ragu and other tantalizing options. But the short rib lasagna seemed too tasty to resist, so I didn’t even try.

As it turned out, this was the single-best decision made in three trips to Union Market. Proprietor Matteo Catalani, a 23-year-old native of Pistoia, Italy, is rapidly making a name for himself as owner of one of the go-to spots in the space. His lasagna noodles were perfect on the palate, soft without being soggy. The beef was flaky tender with just a hint of salt, but it was the béchamel sauce — a French-inspired concoction of butter, flour and milk — that added a sublime creaminess to the dish. At $13, the lasagna isn’t cheap, but the portion was generous and the flavor had us still thinking about it days later.

Don’t just take it from us: Check out Cucina Al Volo’s near-perfect Yelp reviews for more testimonials, such as this one from Emily D: “I had no idea that pasta could even taste like this. Not even kidding. I have had the fresh pasta with bolognese as a lunch option AND bought some to take home and cook. I don’t think I will ever go back to store bought pasta as long as this place is in Union Market.” 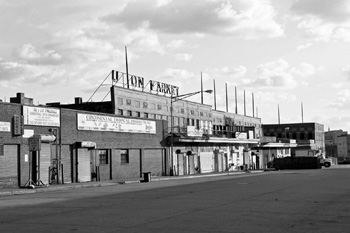 For over 200 years, Union Market was a historic site that attracted fresh food vendors, but it had fallen into disrepair until a recent restoration.

If you’d like to take some fresh pasta home to experiment in your own kitchen, Catalani has you covered. You can even watch as his crew cranks out fresh strands of the delicious carbs right before your eyes.

For our final stop at Union Market, we got in line at TaKorean. The taco stand might be the most popular spot in Union Market and we can see why. Everything we tried tasted fresh and interesting. Diners can create dozens of concoctions among TaKorean bowls or tacos, as well as their slaws, kimchi and kale. For protein, choose among Korean-style bulgogi beef, dak galbi chicken, bo ssam roasted pork and hoisin-caramelized tofu.

We mixed it up, trying one each of the beef, chicken and pork tacos topped with kimchi, slaw and kale respectively. Each had a distinctive flavor, with the shredded bulgogi beef and spicy kimchi combo coming out on top. Each of the tacos was generously proportioned and a relative bargain at $9 for all three. If we had one quibble it was the corn tortillas — or shell — that the tacos were served in. Not bad, but a little dense and could have used a bit more heating up. It’s a small complaint, but worth noting for taco aficionados.

TaKorean also offers some interesting craft beers on tap, which are a steal at $4 apiece during happy hour from 3 p.m. until Union Market’s 8 p.m. closing time.

At a time when the D.C. area is focusing intently on food as entertainment and as a destination, it’s no surprise that Union Market is drawing huge crowds. And the fact that it’s helping lift a previously downtrodden part of town into a brighter economic future (many of its employees hail from the same Northeast neighborhood) is all the more reason to celebrate.