Irish Artist Exposes War by Giving Voice to Its Victims

Rock and a Hard Place: Europe Grapples with Sino-American Rivalry

Will NATO Still Be Relevant in the Future?

Chinese Artist, Humanitarian Groups Plead for Help for World’s Most Vulnerable During COVID-19 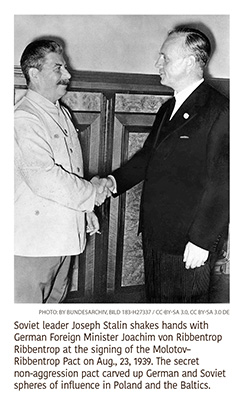 This year will witness two great anniversaries: 75 years since the end of World War II and 75 years since the establishment of the United Nations. Unfortunately, both events continue to be overshadowed by manipulations of a well-known permanent member of the U.N. Security Council that twisting historical facts for its own purposes.

No one can claim a monopoly over the historical truth and the joint Western allies’ victory in the Second World War, yet this is precisely what Russia is trying to do.

In a world of so-called “Soviet heroic myths,” presented to the public by contemporary Russia, there is no place for truth. Those myths are used as a toolkit of endless political and ideological manipulations. For example, Russia is now pushing through the U.N. General Assembly a resolution on the anniversary of World War II that bends the facts of the war to suit its own interests.

Unlike the popular narrative of Russian propaganda that the U.S.S.R. had a consistent policy in countering Nazism, the fact remains that the Soviet Union entered World War II in September 1939 as an ally of the Nazi Germany. Poland was the first to fall prey to the schemes of power-hungry murderous totalitarian regimes in Berlin and Moscow, with the Baltic states to follow.

Until the very day of German attack on the Soviet Union in June 1941, the U.S.S.R. continued to support its strategic ally with voluminous supplies of grain, oil products, nickel and ore.

The falsifications over the solemn victory of Russia as a successor of the Soviet Union in the Great Patriotic War — the term used in Russia and some former Soviet republics to refer to the 1941-45 conflict with Nazi Germany on the Eastern Front — are yet another myth. (In April 2015, the Ukrainian parliament replaced the term “Great Patriotic War” in the country’s law with “Second World War.”)

The real fact is that all republics of the former Soviet Union paid their bloody share of the war.

The territory of Ukraine was repeatedly ravaged by the whirlwind of the war since September 1939. As the military front in Europe rolled twice over the territory of Ukraine, even conservative estimates put the number of my perished compatriots at 8.5 million. Half of the economic potential of my country was totally destroyed.

Over 7 million of Ukrainians fought in the Second World War in seven armies — in particular, in the Polish, French, British, Canadian and U.S. armed forces. Ukrainian generals and marshals commanded the forces on more than a half of the Soviet fronts. A quarter of those mobilized to the Red Army were Ukrainians.

gear that gave rise to concentration camps and ghettos springing up all over European soil, razing whole towns and villages to the ground and exterminating millions of people  in gas chambers and by firing squads.

While the Eastern European nations carried the highest burden of the war, the victory was only possible with the support of Western allies, mostly the United States and Great Britain.

As Winston Churchill wrote in a telegram to President Harry S. Truman on May 9, 1945: “In all our victorious armies in Europe we fought as one.”

The fight of all nations that were defending humanity itself, as well as the support of Western allies, particularly the supplying of military aid under the lend-lease program, deserves to be saluted and remembered. The Soviet Union received over $160 billion worth of assistance in today’s prices.

Moreover, the pride of victory in the Great Patriotic War was put at the apex of mass political hysteria in Russia with the newly created popular slogan “If needed, we can do it again.”

After the formation of Russia in 1991, Moscow officially recognized May 9 as Victory Day, marking the surrender of Nazi forces to the Soviet Union. Since then, Victory Day has become the most important holiday in Russia, particularly in the wake of growing nationalism in Russia and alienation from the West, as Moscow shifts the narrative of World War II to emphasize its struggle to preserve its sovereignty over its own territorial ambitions.

This phenomenon of “pobedobesie,” or “victory frenzy,” allows Russia to imitate a sense of national greatness and justify Moscow’s current wars against its neighbors such as Ukraine or Georgia.

Three-quarters of a century has passed, but the international community continues to face even more threats and challenges. Voluntary blindness, complacency and policies of appeasement may look as a prudent behavior, but in the end they will inevitably lead to a strategic fiasco.

We must remain vigilant and not allow Russia to use the hypertrophied anti-fascism and anti-Nazism stance to cover up the Kremlin’s own aggressive policies. The greatest tragedy of the past century cannot be simply used as a tool to satisfy Orwellian political objectives.

Seventy-five years ago, mankind paid a terrible price to attain peace. Let us stay true to the slogan “never again.”