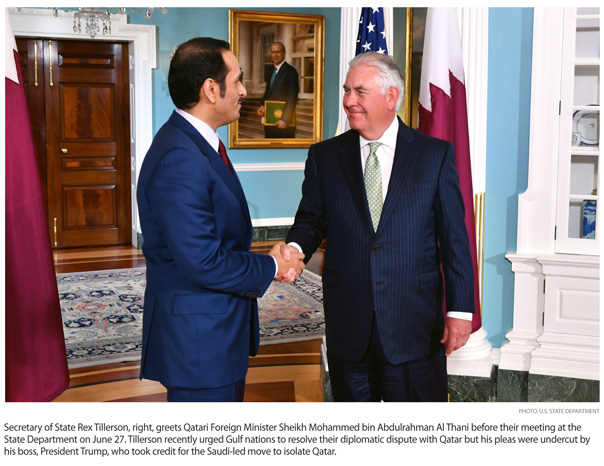 You have to feel sorry for Secretary of State Rex Tillerson. When God told him to accept the job, there was no explanation of what it entailed. Having no experience in government, and his time in uniform having ended after he made Eagle Scout, he is only able to draw on his experience in the energy business.

In that career, all that was required was poking the right holes in the ground so some gooey black stuff would come out. As CEO of ExxonMobil, he had one goal and a precise measure of how well it was being achieved every three months. All he had to do was hop into bed with any autocrat with oil and next quarter’s profits were assured.

Now the goals are numerous, nebulous and at times conflicting. On top of that, his boss wants to cut the State Department’s budget by a third. The department has managed to brief the press only a handful of times this year, but for this the green eye shades were trotted out to explain the cuts and assure the journalists that the slimmed-down budget:

There was no mention of a cure for cancer or establishing world peace, but something has to be saved for next year. The press was informed about all this by teleconference since it saved electricity by not having to turn on the lights in the briefing room and also saved having to keep a straight face when talking to the reporters.

With all that on his plate, it is no wonder Tillerson and his chief of staff have reportedly struggled to get their footing when it comes to internal management of the department. And the chief of staff can’t be of much help anyway since her job is mainly to ensure State’s 75,000 employees have as little contact with him as possible.

Given his popularity at work, it is no wonder he using his leisure time to ride around on his motorcycle. But at least a Harley is the perfect metaphor for the foreign policy he has to implement — very loud and flashy, able to go fast only in a straight line since it is hard to turn and indifferent to anything else on the road.

It is also no wonder he hired a consultant to do an organizational study and a listening tour to ask his employees which of the 9 percent of them they would like to see removed. The $1.1 million contract was awarded without competitive bidding to a company founded by a friend to be able to put the resulting plan into action as soon as possible.

Actually, it is already underway. A deputy secretary of state has been confirmed who will hold both positions with that title, so there is one job saved. Using that bit of consolidation as an example could work just fine. For instance, there are six under secretaries of state — for political affairs, economic affairs, arms control, democracy and human rights, management and public diplomacy. There really only needs to be two — one for security and one for prosperity.

There are about 17 special envoys and almost as many special representatives, six ambassadors at large, 14 coordinators and around 8 senior and special advisors. They were looking after things like hostages, energy, climate change, food security, Israel-Palestine negotiations, closing Guantanamo, North Korea, Sudan, Syria, the Artic and much more. All of them can be eliminated because America’s new foreign policy is not going to bother with many of those things and the free market can handle most of the rest. And if they were doing anything worthwhile, Jared Kushner can handle it.

At the assistant secretary level, there are six regional bureaus, even though dividing up the world geographically is so old hat. There really only needs to be two regional bureaus now — one for trading partners who give America a fair deal and one for the rest of the world.

And the lord only knows how many functional assistant secretaries of state there are. But there again they are mostly doing things like economics, human rights, education and cultural affairs, refugees, science and the environment that are unnecessary because they are of no interest to average Americans. It is probably easiest just to put the organizational chart up on a wall and throw a few darts at it. Where they land and stick determines what bureaus stay.

So there is no need to blow a million bucks on a study when the task is so easy. After that there will be only one more thing that Secretary Tillerson has to worry about. Forbes magazine rated him the 24th most powerful person in the world last year. It’s going to be hard to maintain that ranking when room has to be made ahead of him for Ivanka, Jared, Kellyanne Conway, Steve Bannon, Sean Spicer, Reince Priebus and Sarah Huckabee Sanders.

Dennis Jett is a former U.S. ambassador who served in the Foreign Service for 28 years on three continents. The author of the 2014 book “American Ambassadors: The Past, Present, and Future of America’s Diplomats,” Jett is currently a professor of international affairs at Pennsylvania State University.

The views expressed here are the author’s own.