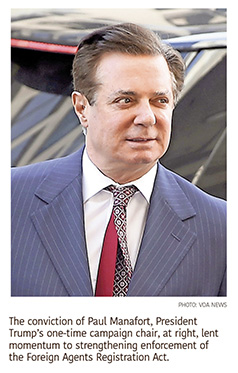 The Department of Justice’s Foreign Agents Registration Act (FARA) enforcement unit was until recently a fairly sleepy outpost. The multiple convictions of Paul Manafort, President Trump’s one-time campaign chair, changed all that — along with a fear that Russia, a hostile foreign power employing public relations firms, had gained undue influence over U.S. electioneering and policymaking.

Suddenly, FARA’s get-tough enforcement has become very real. Already, it has had profound consequences for U.S. domestic communications, lobbying and law firms, but now its reach is set to expand even further.

FARA, enacted in 1938, requires persons acting in a “political or quasi-political capacity” for foreign principals to register as foreign agents. This includes not only lobbying for foreign clients, but also more vaguely defined activities such as consulting and organizing communications campaigns on behalf of foreign governments, NGOs, companies and individuals.

Despite its broad definition, FARA prosecutions have been rare over the decades, but all that could be changing because the Department of Justice (DoJ) has pledged to make FARA enforcement a top priority.

To that end, Brandon Van Grack, a former member of special counsel Robert Mueller’s prosecution team, has been brought on as the new chief of the FARA unit at DoJ to more aggressively enforce compliance with the law.

Based on a recent speech by Van Grack, the FARA enforcement branch, for the first time, will go after entirely foreign public relations, lobbying and law firms engaged in communications activities attempting to influence the U.S. public or U.S. policy. This is interpreted to include litigation communications.

Van Grack is clearly playing for keeps. He made news at a D.C. conference recently by announcing that he and his team may well require foreign public relations firms to register under FARA when representing companies, countries and interests seeking to shape actions in the U.S. — particularly via the internet. This is a broad and unprecedented interpretation of the statute. It may or may not survive a legal challenge, but it needs to be taken seriously by individuals and institutions.

DoJ’s renewed focus on enforcement demonstrates how the stakes on FARA have abruptly changed on both the civil and criminal fronts. Lobbying and public relations firms should seek U.S. FARA counsel to assist in anything considered a grey area. Meanwhile, foreign-based firms can no longer assume that FARA is the exclusive province of U.S. firms.

As Joshua Ian Rosenstein, a FARA specialist at Sandler Reiff Lamb Rosenstein & Birkenstock, P.C., put it, “DoJ’s new emphasis on FARA is a warning shot to foreign companies and their U.S. consultants, who are forced to grapple with a criminal law that is broad and complicated. Now is the time for foreign companies and their U.S. consultants to re-examine their FARA compliance.”

“Grapple” is right: FARA is not only complex, it’s old. It was adopted during FDR’s second term, when there was fear that European strongmen and Nazi propaganda were bullying their way into American society without being caught or punished. FARA never anticipated an era of instantaneous and global communications. Complying with the law’s antiquated rules can be challenging. 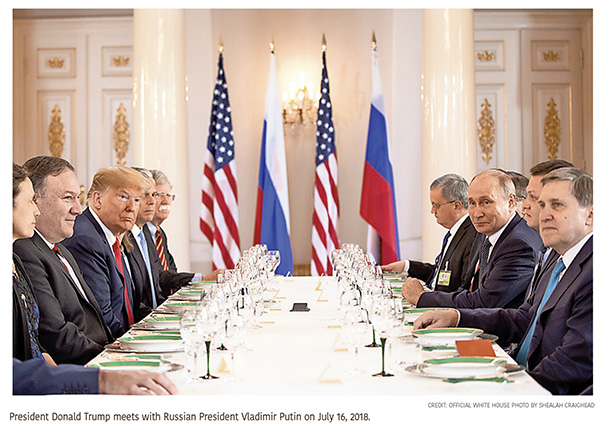 “We need to do a better job defining the work that falls under FARA so there are no blurred lines,” said Paul Miller, the president of the National Institute for Lobbying & Ethics, a membership group for lobbyists. “I’m not a fan of more regulations, but I am in favor of effective regulations. We need to work with lobbying professionals to close loopholes and create a system that’s not so burdensome and expensive that it forces people to take a chance — only to claim ignorance when they get caught.”

No matter how closely attuned they are to U.S. politics, foreign law firms sometimes don’t fully appreciate the nuances of FARA. Unlike the Foreign Corrupt Practices Act (FCPA), which has been emulated in nearly four dozen other countries, FARA is distinct. It has its own peculiarities.

“FARA is a compacted statute to interpret and apply,” said Amy Jeffress, a partner at Arnold & Porter. “Many of its terms are not well defined, especially in the language of the exemptions to the statute. Companies whose interests are closely aligned with the foreign government need to seek advice in order to avoid operating outside the bounds of the exemptions without registering.”

According to Matthew Sanderson, a FARA expert at Caplin & Drysdale, “We are at the dawn of a whole new era of FARA enforcement, with the DoJ not only actively policing the law but also going after high-profile individuals and firms. Those representing foreign governments, NGOs, companies and individuals can no longer afford to ignore the law or rely on their prominence to save them. It will be vital in the months and years ahead for those working in this space to both understand FARA and institute a FARA compliance system, particularly as it relates to taking in new clients that are located abroad.”

Brian Fleming, a partner at Miller & Chevalier, added: “All signs point to more FARA prosecutions on the horizon. Any foreign activities touching upon the 2020 election will certainly get heightened scrutiny. I also expect DoJ to turn its attention to rooting out unregistered foreign influence in a wide variety of other contexts, including law firms and media companies, and to make far more aggressive prosecutorial decisions than it has in the past.”

Flouting conventional wisdom, FARA’s interpretation of “foreign principals” encompasses not just governments but also institutions and individuals, an interpretation likely to get broader under Van Grack. FARA also does not require an actual contract between an agent and the foreign principal in order for the law to be applied. As Rosenstein points out, “it merely requires that a consultant act at the direction or control of, at the request of, or funded by, a foreign principal.”

FARA, to be sure, covers more than “lobbying” for a foreign client. It slaps regulations on a laundry list of “political” activities aimed at influencing the U.S. public, from conducting grassroots communications, to pamphleteering and distributing “informational materials,” to merely counseling a foreign-based client on a U.S. public affairs strategy. Too often, foreign entities fail to understand DoJ’s broad interpretation of FARA’s political activity statute. 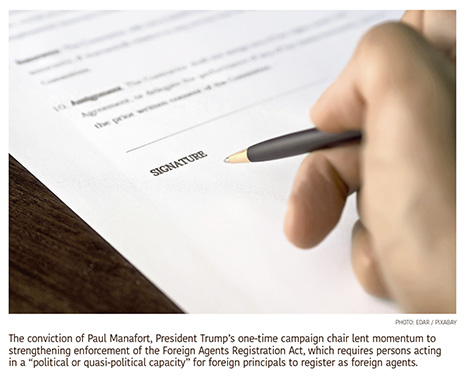 The frustrations don’t end there. FARA makes no mention of email or social media, even though both have become critical tools in interacting with the U.S. public.

Even FARA’s exemptions for “humanitarian” and “commercial” activities are tough to decipher. If a foreign state-owned manufacturer hires a lobbyist to soften U.S. trade sanctions, does that advance the interests of the foreign government and therefore trigger FARA? If a foreign corporation seeks to strengthen its brand recognition in the U.S. and brings along its ambassador to participate in meetings with potential investment partners, does that “directly promote” — as FARA puts it — the government’s interests? It’s unclear, but it’s better for organizations to be safe than sorry.

Given the considerable pressure that DoJ is now under to deliver FARA convictions, it means that communications firms are likely to get caught in the undertow. Public relations firms need to recognize that — from day one of their representation of a foreign entity — they’re not immune. As LEVICK makes clear in our new eBook on the challenges facing foreign companies operating in the U.S., PR firms and others should be transparently and fully compliant with FARA reporting and registration. Every account should have a designated FARA compliance coordinator working under the aegis of legal counsel.

Thanks to Manafort’s slipshod ethics, congressional investigators and the U.S. media are suddenly extra vigilant about FARA. Moreover, FARA scrutiny from the media and NGOs is almost always going to be negative. Plan for that contingency so you’re not caught off guard.

Richard Levick, Esq. (@richardlevick) is chairman and CEO of LEVICK. He is a frequent television, radio, online and print commentator and a contributor to The Washington Diplomat.