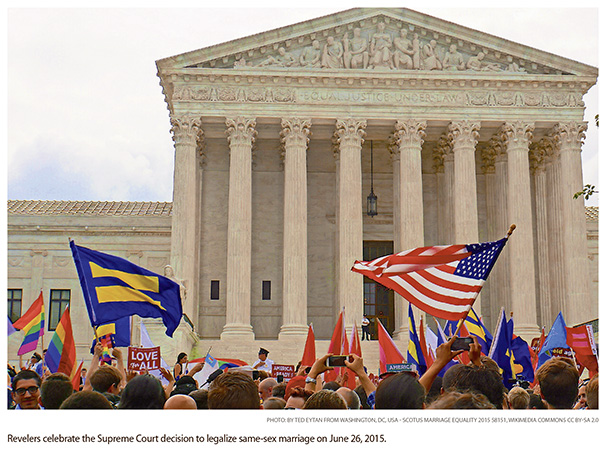 On Oct. 1, the Trump administration began denying visas for same-sex partners of diplomats working at the United Nations in New York. In a memo to the U.N., the U.S. government informed foreign diplomats that the State Department will not issue G-4 visas for same-sex domestic partners who wish to join newly arrived U.N. officials unless they provide proof of marriage. Those already here must provide a marriage certificate by Dec. 31 or leave the country within 30 days.

According to the State Department, the purpose of the policy is to promote the equal treatment of all family members and couples in light of the 2015 Supreme Court decision legalizing same-sex marriage. Since then, the department announced that it would change its policies to accommodate that landmark decision, extending diplomatic visas only to married spouses of U.S. diplomats. It’s now applying that rule to foreign diplomats in the U.S., estimating that the new policy will impact roughly 100 families.

But this new policy does not promote equality — rather, it does the opposite. It is in direct contradiction of the State Department’s own internal policies for same-sex diplomats, and it also conflicts with broader U.S. human rights diplomacy mandates.

The majority of countries globally do not recognize same-sex marriage or partnerships. While vast reforms on LGBTI rights are sweeping across many liberal democracies, the trends are moving in the opposite direction in many African, Latin American and Middle East countries.

The International Lesbian, Gay, Bisexual, Trans and Intersex Association (ILGA) produces an annual map illustrating sexual orientation laws around the world. Upon publication of the 2017 report, ILGA noted that the updated map and data “starkly indicate the absence of positive law in most parts of the world.”

Given the current global trends and the inability for many same-sex partners to marry, this new U.S. government policy places an undue burden on foreign diplomats appointed by their countries to work at the United Nations. It is tantamount to firing them from their jobs.

For those who do opt to get married in the United States to comply with the policy, it could make them vulnerable to retribution back home if their government criminalizes homosexuality or same-sex marriage. It could be a no-win situation for many diplomats and their partners, who either face deportation from the U.S. or discrimination, the loss of their jobs or even imprisonment and death in their home countries.

The State Department has a history of firing its own LGBTI diplomats. In 1953, President Eisenhower signed Executive Order 10450 banning homosexuals from working for the federal government or for any of its private contractors.

During the McCarthy era in the 1950s, officials actively sought to flush out “commies and queers” from federal service, according to author David K. Johnson’s book “The Lavender Scare: The Cold War Persecution of Gays and Lesbians in the Federal Government.” Johnson documents how this Lavender Scare permeated the State Department with the “fear that homosexuals posed a threat to national security and needed to be systematically removed from the federal government.”

The State Department and other federal agencies publicly shamed and fired people, even if they were only suspected of being gay. Believed to be persons of “perverted morals” and even mentally ill, Johnson writes that they would be at risk for blackmail and extortion from foreign spies “outing” them. They were therefore a security risk and threat to the nation, Johnson notes.

In the end, approximately 4,380 gay men and women were discharged from the military and around 500 were fired from their government jobs. Far beyond the 1970s, up until 1975, the U.S. government could remove a federal employee for “immoral conduct” (a euphemism used primarily for homosexuality).

Through the 1980s and into the 1990s, LGBTI diplomats’ careers were at risk if they dared to live openly. In fact, LGBTI individuals were prohibited from serving in the State Department until 1992.

Historically, the State Department has had an overt policy of discriminating against LGBTI diplomats. Under the Obama administration, however, then-Secretary of State Hillary Clinton reversed these discriminatory policies.

In a watershed moment — pivotal in the integration of LGBTI rights into U.S. foreign policy institutions — Clinton delivered a speech before the Human Rights Council in Geneva on Human Rights Day in 2011. In the most famous portion of her speech, she proclaimed “gay rights as human rights and human rights as gay rights.”

Following Clinton’s speech, the Obama administration announced that the U.S. would use all available tools of American diplomacy, including “the potent enticement of foreign aid, to promote gay rights around the world.” 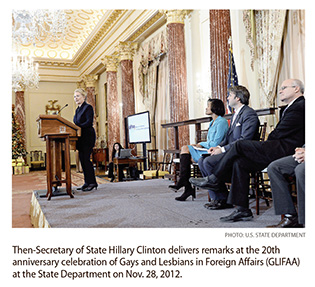 As a result, U.S. embassies worldwide have since engaged with LGBTI civil society actors and government officials to discuss local gay rights, raise awareness of LGBTI issues in local media, coordinate with other embassies and support outreach campaigns.

Specifically, Kerry noted that in 2015, to further promote gay rights around the world, he appointed the first-ever special envoy for the human rights of LGBTI persons. Kerry’s acknowledgment signified a complete reversal of policy toward State Department employees, as well as the embrace of gay rights in U.S foreign policy.

As part of that policy, the U.S. is currently the largest global donor to local LGBTI civil society groups. The Global Equality Fund is a multimillion-dollar organization that supports transnational and local civil society groups working to promote the human rights of LGBTI people.

Launched in 2011, this fund is managed by the State Department’s Bureau of Democracy, Human Rights and Labor in partnership with private corporations, foundations and the governments of Sweden, Finland, France, Germany, Iceland, the Netherlands, Norway and Denmark, among others.

Loss of Diplomatic Protection Could Mean Life or Death

The State Department has implemented significant reforms to its external policies and internal regulations concerning LGBTI employees. However, before 2009, the U.S. did not afford equal standing to the same-sex partners of members of its own diplomatic corps, similar to what is now being required of the U.N.

For these U.S. diplomats, attaining official partnership status was a life or death determination. In emergency situations, such as a coup d’état in Mauritania or a natural disaster in Haiti, for example, only official members of the diplomat’s household could be evacuated and brought into the protection of an embassy. Put more plainly, the family dog could be evacuated, but a same-sex partner of an American diplomat would not be rescued.

The 2009 policy change, which gay diplomats had spent years lobbying for, extended the same protections to same-sex partners that heterosexual married couples enjoyed, ensuring that those partners would not be left behind in an emergency.

Other important security and health benefits that were reformed at that time included:

• Health care and the use of U.S. medical facilities at overseas posts

This new Trump administration policy will likely be contested in U.S. courts on the grounds of discrimination based on sexual orientation. Nevertheless, the administration seems determined to chip away at reforms made under President Obama for gay equality in foreign affairs. This new directive counters U.S. foreign policy reforms, revisits the State Department’s turbulent past with its own LGBTI employees and is incongruent with U.S. foreign policy goals.

Elise Carlson-Rainer is an assistant professor of international relations in the School of Security and Global Studies at American Public University, a private, for-profit, online learning institution accredited by the Higher Learning Commission. She is a former U.S. diplomat with the State Department’s Bureau of Democracy, Human Rights and Labor who also worked with the U.S. Mission to the United Nations and USAID.