Home The Washington Diplomat October 2019 Op-ed: Will Rex Tillerson Go Down as One of the Worst Secretaries of State?

One thing diplomats often have to do is help their fellow citizens when they go abroad and do something foolish. Those unwise decisions take many forms. A missionary in a country in the midst of a civil war may decide that his deity will prevent any harm from coming to him. Other people will show up at an airport for an international flight with a suitcase full of drugs thinking the authorities cannot possibly be smart enough to catch them.

For American diplomats at least, there is a third group that also frequently poses a challenge. It is businessmen who fly in for a meeting with government officials and believe they will have a deal signed by lunch and be back on their corporate jet before the sun sinks in the sky. They have no interest in learning much about the local situation and display a remarkable mix of ignorance and arrogance. And the bigger the company, the truer it tends to be.

That combination is why when future historians consider the Trump era, there is one debate they are sure to have. The argument will be whether Rex Tillerson was just among the worst secretaries of state or wins the gold medal for ineptitude.

Tillerson provided a lot of support for the latter point of view when he sat down for an interview with the staff of the House Foreign Affairs Committee in May. A somewhat redacted transcript of the meeting was released several weeks later.

Tillerson said he did not prepare for the meeting, which was perhaps why he said — over 30 times — that he could not remember the responses to questions posed by committee staff. He was also aided in avoiding most substance by being accompanied by two of his own lawyers and one from the State Department who exerted executive privilege on seven occasions.

Tillerson did describe how his goal as secretary was to promote and protect freedom, democracy, individual liberty and human dignity, and he lauded the tireless efforts, talent and dedication of State Department personnel. He also said that when he was called to Trump Tower in New York to meet Trump for the first time, he talked for over an hour about how he saw the world. He was then offered the job on the spot without any discussion of the role he would play.

Tillerson lasted only 14 months in the position, which is one of the shortest tenures on record. There are a few secretaries of state who exited quicker for various reasons, but it would be very hard to name one who was fired faster.

While he parroted the required rhetoric about American values and the valuable State Department staff, his respect for both rings more than a little hollow. He never let values get in the way of making a profit for his company. And among his first acts as secretary was surrounding himself with a very small group of people with little to no foreign policy experience, isolating himself from the rest of the building and bringing in clueless outside management experts to work on a reorganization plan that envisioned cutting the department’s budget by somewhere between a quarter and a third. Such a huge cut would require a massive and forced reduction in the number of diplomats and civil servants. Unlike the Pentagon, the State Department cannot deal with a budget cut by deferring the acquisition of a billion-dollar bomber or a few multibillion-dollar ships.

Another of his first acts was to freeze hiring, including that of the family members overseas. The move had no relation to the supposed reorganization and was a disaster in every respect. A report by the Inspector General determined that the freeze had endangered the security, health and safety of department personnel and devastated morale. At the same time Tillerson was doing his best to eliminate the chances of meaningful employment for the spouses of diplomats, he was ignoring the politicization of parts of the State Department. Another IG report found gross mismanagement and abuse of career employees in the Bureau of International Organization Affairs.

Tillerson even managed to compound his own weaknesses by his personnel decisions. He hired a chief of staff he had never met who had no State Department experience and a deputy chief of staff with even thinner credentials. The person he brought in to run the reorganization had no government experience and lasted only three months. The man he looked to for slashing the budget came from a rightwing think tank and was again someone who brought no relevant experience to the job.

To say it was a question of the blind leading the blind would be to imply that Tillerson at least had a sense of touch. He didn’t and instantly alienated the press corps at the department by cutting the daily press briefing to a couple of times a month while making no room for interviews — or for the press — on his plane during overseas trips.

His relationships in other parts of Washington were not much better. He made little attempt to cultivate congressional leadership or ties with the administration. And he failed at his most important relationship — the one with the president — when he made what will be his most memorable quote by referring to Trump as a f**king moron.

Tillerson confirmed to the committee staff that he believed Trump to be “a man who is pretty undisciplined, doesn’t like to read things, doesn’t like briefing reports, doesn’t like to get into the details of lots of things.” But then he hastened to add that he did not consider this a critical or pejorative assessment, but rather just a description of how Trump operates. 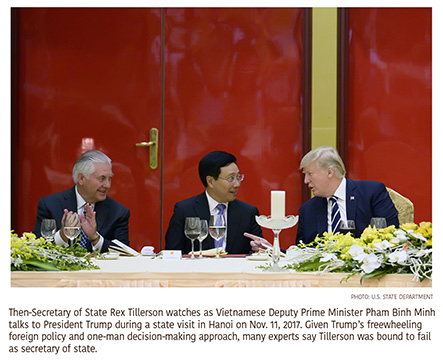 He justified his desire to gut the department’s budget on the basis of the growth in its staffing over the last decade without ever bothering to ask why that had happened. During the period from 1985 to 2000, the department’s budget in real terms was cut in half thanks to a post-Cold War attitude that communism no longer had to be confronted everywhere in the world and that budget deficits mattered. Following the terrorist attacks of 9/11 and the onset of the wars in Afghanistan and Iraq, there was a surge in hiring. Much of that was for security, where spending has increased 1,000% in the last two decades.

Having spent his entire career with one oil company and an education that consisted of a bachelor’s degree in civil engineering, Tillerson was the least qualified person in American history to serve as secretary of state. He is the only person to have entered the office without having spent a day in government, elective office or the military. His time in uniform consists of his days as a boy scout and his time as CEO of ExxonMobil was spent maximizing the company’s profits by denying climate change and making deals with any dictator with oil.

It would be hard to find anyone in Washington who will miss him besides the small group of equally unqualified people he picked to help him run the State Department. But he no doubt went into the job sure he would be as great there as he had been in business. That combination of arrogance and ignorance will have earned his place on the bottom rung of history.

It’s always amazing to see people who have had success outside of government think they will be as equally successful in it. If someone with an outstanding record as a diplomat announced that for a second career they were going to build a high-rise hotel or an oil refinery, how many people would rush to invest in the project? The business of government is not the same as selling condos to Russian oligarchs who want their money laundered or digging holes in the ground to look for crude.

The only thing that can be said in Tillerson’s defense is that it was a job where no one could succeed. His boss was the first major party candidate in history with no time in government, elected office or the military. That, plus Trump’s aversion to learning anything on the job and his reliance on his gut instincts for decisions, makes a coherent foreign policy impossible.

Trump’s governing style is basically medieval. Decisions are made solely based on what is good for the king’s grip on power. Those who surround him are equally self-serving and constantly jockeying for his ear to have the last word and curry his favor. He demands absolute loyalty from his minions, gives none in return and trusts only a few family members. That’s why his daughter and son-in-law run whatever parts of the government they want to dabble in and why his cabinet and staff is composed of grifters and sycophants.

Tillerson lost Trump’s trust and any influence over him with the moron comment even though it was accurate. For if it is one thing that naked monarchs don’t like, it is to be told they have no clothes.

Dennis Jett is a professor of international affairs at Penn State University. His 28-year career in the U.S. Foreign Service included assignments as ambassador to Peru and Mozambique and in Argentina, Israel, Malawi and Liberia.