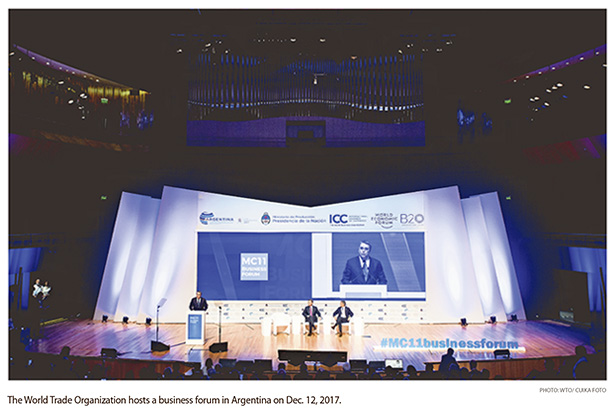 This month, the World Trade Organization (WTO) is hosting its annual Public Forum, a three-day marathon of open discussion on the latest developments in global trade. As many as 1,500 participants from governments, civil society, business and academia will explore ways to strengthen the rules-based system that has guided international trade for more than 70 years.

The topic this year, Trade 2030, could hardly be more timely. Issues such as sustainability, technology and inclusive growth will be key elements in shaping the global trading system for the 21st century. But the discussions in Geneva take place against a backdrop of rising trade tensions. The multilateral trading system is under pressure, and the challenges we face cannot be taken lightly. Underlying issues such as the rights and obligations of emerging economies need to be addressed, as do more specific issues such as transparency, subsidies, state-owned enterprises and technology transfer.

In the pre-World War II years, protectionism and economic depression shaped the world economy. In the years since, a liberal, rules-based multilateral trading system has fostered growth around the globe. Tensions in the multilateral trading system are bad news for billions of people throughout the world. It’s also bad for business, especially for small- and medium-size companies that cannot risk trading or investing in an unpredictable business climate. And it’s particularly damaging to the poorest countries.

The multilateral trading system is a remarkable triumph for international cooperation. It is a result of countless small steps and careful compromise. What seems unlikely today may be tomorrow’s triumph.

Safeguarding and strengthening that system, which has ushered in economic growth and other benefits throughout the world, should therefore be our top priority.

The Norwegian government is among those that have recently voiced concern over the state of world trade. We see a danger of increased instability in the world economy that could slow global growth. However, it is my personal experience that in trade policy — negotiations in particular — patience and trust are decisive factors for success. Early in my career, I was for some time part of the Norwegian negotiating team in the Uruguay Round. Long meetings, often running into the early hours, yielded results in the end.

As a trading nation, Norway prefers agreed-upon rules and predictability. That is why we put so much effort into finding solutions. We are fully aware of the need to address underlying concerns. However, we don’t believe that protectionism is a good answer. And we don’t want to gamble with what works in order to fix what doesn’t. The challenges are global; solutions should be multilateral.

In my opinion, it’s about time for the entire WTO membership to reflect on the root causes of the tensions in the trading system. How each of us responds will have an impact on our common good.

The principles of nondiscrimination, bound commitments and a rules-based system of dispute resolution are timeless. But trade in 2030 must be more sustainable and more inclusive. Let’s build on 70 years of dialogue between governments on the interface between individual countries’ political choices and the global common interest. Through shared norms, rules, regulations and dispute settlement procedures, member states seek to ensure that the global economy is based on international cooperation and an open, rules-based trade policy.