DACOR, an organization for retired U.S. Foreign Service Officers, operates out of an elegant mansion only two blocks from the White House. Yet in the wake of the Ukraine scandal, the prestigious club — possibly for the first time in its 67 years of existence — is clearly unnerved by the current occupant of 1600 Pennsylvania Avenue.

“I am worried, and I think many of our members are worried,” said DACOR’s executive director, John Bradshaw. “We talk about it a lot.”

The “it” Bradshaw refers to is, of course, President Trump’s unabashed hostility toward the U.S. ambassadors who came forward during his House impeachment inquiry. Their testimony largely supported claims by Democrats that the president withheld crucial military aid to Ukraine and an Oval Office meeting with the country’s newly elected president unless Kiev launched a corruption probe into Hunter Biden, the son of Joe Biden, Trump’s political rival.

The president’s ire was specifically directed at Marie Yovanovitch, the former U.S. ambassador to Ukraine whom Trump removed from her post in May 2019, along with William Taylor, the veteran diplomat sent to replace her in Kiev. Yovanovitch testified during the impeachment hearing that she was dismissed after “unfounded and false claims by people with clearly questionable motives,” alluding to Rudolph W. Giuliani, Trump’s personal lawyer, who took over the Ukraine portfolio and, critics say, waged a shadow foreign policy campaign to advance the president’s personal political agenda.

Taylor, along with other U.S. diplomats, accused Giuliani of a smear campaign to get Yovanovitch fired, possibly because she would have stood in the way of business dealings by two of Giuliani’s clients (one of whom recently said she was under surveillance by people linked to Giuliani).

Yovanovitch’s colleagues lamented that Secretary of State Mike Pompeo did not do more to protect a respected diplomat from false attacks (also see “Foreign Policy in an Age of Impeachment: A Former U.S. Ambassador Speaks Out” in our December 2019 issue).

Yet even before Pompeo’s leadership became inextricably linked with the battle over whether to impeach Trump following his fateful July 25 phone call with Ukrainian President Volodymyr Zelensky, longtime diplomats felt their futures on the line.

“We already saw the State Department Inspector General’s report about political targeting of career employees,” Rep. Eliot Engel (D-N.Y.), chairman of the House Foreign Affairs Committee, told Foreign Policy magazine in late October. “While I can’t comment on what’s been discussed by witnesses, any sort of improper retaliation against State Department personnel is utterly unacceptable. Yet, sadly, it has become typical under this administration. The Foreign Affairs Committee will continue to make it a top priority to protect our diplomats from abuse and harassment.”

Bradshaw is reluctant to criticize any president directly, given the nonpolitical nature of the organization he heads.

“Our mission is to support a strong bipartisan diplomacy,” he said in a recent interview at Bacon House, the 200-year-old brick mansion at 1801 F Street where DACOR is headquartered. “We have members from both political parties, but the importance of diplomacy and the need to have a strong State Department and Foreign Service is what really unites us.”

Yet right now, Bradshaw warned, morale at the State Department — which was already besieged by vacancies and proposed budget cuts ever since Trump came to office — “is low” and the diplomats working there don’t feel that top officials have their backs.

“The Trump administration has made our mission more necessary. We don’t have a real constituency to support the U.S. Foreign Service, like there is to support the military,” he said. “A lot of career diplomats have resigned; some were forced out at the beginning of this administration. So what we do is very important now, because diplomacy itself is under fire.”

‘Just Trying to Support Our Diplomacy’

Founded in 1952 as Diplomatic and Consular Officers Retired, DACOR — which uses only the acronym now — employs 20 people and operates on an annual budget of $1.7 million. Bradshaw became its executive director in February 2019, replacing Susan Cimburek.

Its stated goal is to foster “frank dialogue about current foreign policy matters,” in part through various events such as weekly discussion groups on issues of the day. Recent events explored timely topics such as “The Taiwan Elections and What the Results Mean for China and the U.S.”; “Survival of the Small Gulf States: Between Iran and Saudi Arabia”; and “The State of the Foreign Service and Its Future” — a particularly relevant topic given the ongoing turmoil and politicization at Foggy Bottom.

“We have members here, including myself, who served under both Democratic and Republican administrations. I came in when Reagan was president, and also served under George H.W. Bush and Clinton,” Bradshaw said. “Everyone tries to do their job, and now we see a lot of attacks on our career Foreign Service Officers, claiming that they’re partisan and doing things for political motives, when really they’re just trying to support our diplomacy.”

For example, former Deputy Secretary of State William Burns spoke at a DACOR event in late October in which he warned of the “hollowing out” of the U.S. Foreign Service. It’s a subject that comes up frequently these days.

“People are very unhappy about what happened to Marie Yovanovitch,” said Bradshaw. “I served with her many years ago, in the early ’90s. I know her to be a by-the-book, serious career diplomat.”

Bradshaw, a former Peace Corps volunteer in the Philippines, was stationed at U.S. missions in Maracaibo, Venezuela (1986-88), São Paulo, Brazil (1989-90), and Rangoon, Burma (1995-98). Back in Washington, he served mostly in the State Department’s East Asia and human rights bureaus, and after leaving the Foreign Service, he ran the National Security Network, a foreign policy think tank, from 2013 to 2016.

“One of our missions here is to educate the public about what diplomats do. We have a lot of events here — mostly for members — but we also do educational outreach for college and graduate students,” he said. 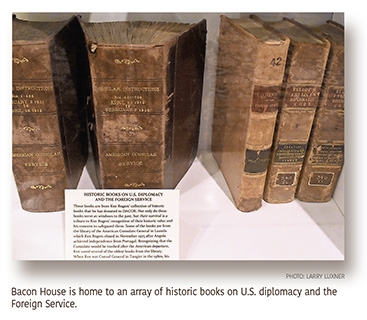 To that end, DACOR awards $250,000 worth of scholarships every year; since 2000, it’s given out 650 scholarships. Among its programs are fellowships for graduate students working toward master’s degrees in international affairs, scholarships for area undergrad students in disciplines related to foreign affairs, with a particular focus on minority candidates, as well as financial aid grants for high school seniors and college students. For the 2019-20 academic year, the $250,000 in scholarships included $110,000 in graduate fellowships and over $95,000 in undergraduate scholarships to students at 28 colleges and universities across the nation, including local schools such George Mason University, Howard University and Trinity Washington University.

DACOR currently has 1,700 members, most of whom are retired Foreign Service Officers. Its roster also includes former Peace Corps volunteers and USAID officials. Membership costs $350 a year for residents and $175 for non-residents. The only requirement is that all members must be U.S. citizens.

“That’s the founding DNA of the organization,” Bradshaw said, adding that “every time a new Foreign Service class comes in, we invite them here for a reception. All of them are eligible for a complimentary membership.”

DACOR is headquartered in Bacon House, which celebrates its 200th anniversary in 2025 and boasts an illustrious history. John Marshall, chief justice of the Supreme Court, lived in the 24-room house in the early 1830s as a boarder. Whenever he was in town, world-famous pianist Arthur Rubinstein played the Steinway grand piano that sits in the North Drawing Room.

In the 1920s, Robert Low Bacon, a congressman from New York, moved here with his wife, Virginia. After his death in 1938, his widow continued to live in the house, where she hosted many ambassadors and diplomats for various events. Following her death in 1980, ownership of the mansion passed to the Bacon House Foundation, which merged with DACOR.

Eight presidents — including Abraham Lincoln, Dwight D. Eisenhower, Gerald Ford and George H.W. Bush — have visited Bacon House. The 14,500-square-foot structure, which cost $6,000 to construct in 1824, boasts 24 rooms on four floors as well as a half-acre garden for receptions and other events. The property is listed in the National Register of Historic Places and is a two-time recipient of the American Institute of Architects’s Excellence in Historic Preservation and Architecture Award.

DACOR offers three guest rooms on the fourth floor for non-resident members visiting Washington, and it maintains reciprocal relationships with similar diplomatic clubs in New York, London and other major cities around the world.

“We also serve as a venue for discreet diplomatic negotiations. We encourage that,” Bradshaw said, noting that DACOR recently hosted a meeting between the ambassadors of Armenia and Azerbaijan, which have been fighting sporadically for years over the disputed territory of Nagorno-Karabakh. “But there are some things we can’t talk about.”

In the space of one recent week alone, DACOR hosted Ricklef Beutin, deputy chief of mission at the German Embassy, who spoke on the fall of the Berlin Wall. Middle East expert Aaron David Miller talked about his new book, “Gulliver’s Troubles,” and Washington Post foreign correspondent Pamela Constable gave a lecture on Afghanistan.

Every year during the last week of September, DACOR hosts a conference that usually attracts 80 to 90 participants; the most recent one was on “Rethinking the U.S. National Interest.”

Perhaps it’s that very national interest which now seems to be at stake, Bradshaw seems to suggest — without identifying Secretary of State Pompeo by name.

“There’s a great concern among our members about the failure of the top leadership of the State Department to fully protect career Foreign Service Officers,” he said. “There’s a lack of recognition by both the American public and by this administration of what diplomats really do.”