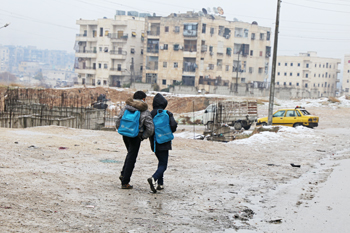 Also See: Other Help for Scholars at Risk

It was 2014 and Syrian academic Nizar (not his real name) said he knew it was time to leave Syria. He and colleagues had been forced for the third time in several months to seek shelter in the basement underneath the university where they worked as mortars rained down on the city.

“I don’t know who was shelling us but I knew it was impossible to continue my work like this,” Nizar, who was in the process of setting up a new academic program for the university, told The Washington Diplomat, asking to remain anonymous.

But he was determined not to leave Syria as one of the hundreds of thousands of refugees who have taken the perilous path across the Mediterranean Sea into Europe. “I planned to leave Syria with financial support and to have a visa as if the situation in Syria were normal,” he said. So he started to look into the possibilities available to scholars like himself: Nizar has a doctorate in electrical engineering and a master’s degree, both from French universities.

Two boys head home after school in eastern Aleppo. After five years of war, millions of Syrians have had their lives — and educations — uprooted.

“I started searching for post-doctoral positions, and while searching, I found the IIE site,” he said, referring to the nearly 100-year-old, globally active Institute of International Education (IIE), which for decades has run a program to provide safe haven for persecuted scholars or academics who live in war-torn countries.

Nizar applied for and was awarded a fellowship through the IIE’s Scholar Rescue Fund (SRF). After that, he had a year to find a university that would be willing to host him for the duration of his fellowship. Thanks to a former student of his (a lesson to professors that it’s always a good idea to keep in touch with students), Nizar was awarded a two-year fellowship at a university in northern France.

He arrived in France in the late spring of 2014 and immediately began working with his former student on a project to improve wheelchair mobility. Their project ended up beating some 500 others to win a competition in France organized by the Ministry of Higher Education and Research. The two are in the process of creating a start-up to continue their work and bring their innovative products to market. They’ve been awarded a grant for 60,000 euro from the French region they live and work in, and Nizar told The Diplomat that in early February, he and his partner were in talks with a “large company in Germany” that might be interested in funding the start-up. With Nizar’s fellowship coming to an end, he is applying for an extension of his French resident’s permit to allow him to get his start-up for disabled people off the ground.

Nizar is typical of the 70 Syrian scholars who have been awarded SRF fellowships since the start of the conflict in 2011. Before Syria plunged into civil war, more than a quarter of young Syrians attended university, where they were taught by thousands of professors, said James King, assistant director of SRF. 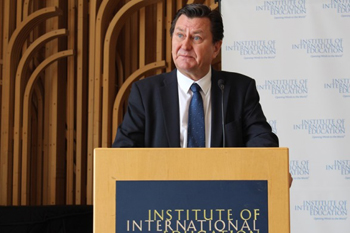 Finnish Consul General Jukka Pietikäinen talks about his country’s efforts to provide safe places in Finland for threatened scholars from Iraq and Syria to continue their academic work, as part of a collaboration with the Institute of International Education.

“Among the displaced Syrians, you have tens of thousands of university students and professors who have skills and expertise and are able to contribute to their host country before they return home or, in some cases, permanently,” King said.

IIE President Allan Goodman and Nizar both insisted that threatened scholars are not refugees. Most of them say that their “number-one wish is to return home” at the end of their fellowships to help rebuild their countries, Goodman said.

“They don’t think of themselves as refugees, and they’re not seeking asylum. They’re seeking this concept of haven. They’re very devoted to their students and their universities back home and want to go back. We view SRF as an investment in a post-conflict future,” he said.

Nizar said he does not know when he’ll be able to go back to Syria. His fellowship ends in May, but following his win in the innovation and entrepreneurship competition, he is in the process of applying for the right to remain in France as a businessman, rather than as a research scientist.

Through SRF, more than 625 scholars from 55 countries have found safe haven in some 350 host institutions in 41 countries around the world since 2002. That includes fellowships to dozens of scholars from Syria and over 300 from Iraq.

In January, Finland joined the ranks of countries that take in threatened scholars. When the Finnish project is fully up and running, the Nordic country will take in at least five threatened scholars from Syria and Iraq in the first year. “As civil war continues to devastate Syria’s higher education system, and the self-proclaimed Islamic State and other radical forces persist in Iraq, there is a greater need than ever for trans-Atlantic partnerships that support academics facing war and targeted threats,” said SRF Chairman Mark A. Angelson.

“Our idea is that we would be giving scholars the possibility to contribute here in Finland to the university, and they would have the possibility to learn about how we do things here,” said Samu Seitsalo, director of the Centre for International Mobility (CIMO), which works with the Finnish Ministry of Education and Culture to promote international exchanges and cooperation. “One day, they could go back to their country and help to rebuild it. What I have understood from many of the scholars is that they would be willing to return home and help to rebuild their nation.”

IIE estimates that, among Syria’s refugee population of 4.5 million people, there are as many as 2,000 university professionals and at least 100,000 university-qualified students whose careers and educations have been interrupted by war. 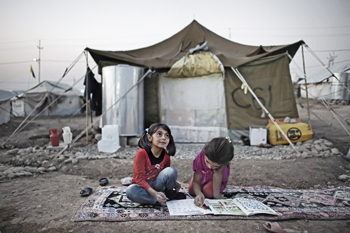 Seated on a rug atop the dirt ground, girls complete homework outside their tent home in the Kawergosk camp for Syrian refugees, just west of Erbil, the capital of the Kurdistan region of Iraq.

Finland is joining the effort to offer a safe haven to these academics amid a rising and increasingly angry backlash to the flood of migrants from the Middle East and North Africa who are pouring into Europe. Finland absorbed 35,000 asylum seekers last year, according to Seitsalo. That’s 10 times the usual intake for the country of just 5.5 million people, he noted.

But by signing up to take in threatened scholars, “We want to give an example of positive things we can do,” as Europe deals — some would argue badly — with the massive influx of people fleeing war, violence and collapsing economies, Seitsalo said.

“We hope that this program will bring a positive element into the debate and discussion here in Finland about asylum seekers and refugees in general. We hope it shows that there are different types of people who are threatened and we need to help on all levels,” he said.

IIE budgets for 90 rescues a year, but “it’s nowhere near enough to meet demand,” Goodman lamented.

And who would have thought that, 100 years after IIE began rescuing academics — at the time, they were fleeing the Bolshevik revolution in Russia — “scholars would still be targeted,” Goodman said.

“We wish we didn’t have to do this,” Goodman said, but as long as academics are threatened with everything from assassination to kidnapping to bombardment to being arbitrarily thrown into prison or prevented from entering a country, “global institutions and nations will be stepping up to help provide them a safe haven.”

And so they should, because the relationship between aided scholars and the organizations and nations that help them is symbiotic and mutually beneficial, according to Nizar.

“In the last 16 to 17 months in France, I’ve achieved a lot, and my achievements have the potential to help a lot of people. And it’s only been possible because of this grant from the IIE,” he told The Diplomat.

Other Help for Scholars at Risk

New York University’s Scholars at Risk (SAR) international network also arranges “positions of sanctuary” at institutions of higher education for academics forced to flee dangerous situations. In addition, the network provides advisory services for host institutions and scholars, including those still under threat as well as those forced into exile who are struggling to restart their lives and careers.

Scholars at Risk also runs a Scholars-in-Prison Project to help protect academics who are unable to leave their home countries due to threats, restrictions or wrongful imprisonment.

SAR’s Academic Freedom Monitor keeps a disturbing tally on threats and acts of violence against academics and entire educational systems. In a statement released after the disappearance and violent death of an Italian Ph.D. student in Egypt in January, SAR said it was the responsibility of state officials “to ensure the security of higher education communities, to prevent future attacks and to hold perpetrators of violence accountable.”

A fortnight after the death of the Italian student, whose body bore signs of torture, “Egyptian authorities have not indicated that any suspects have been identified in connection with the incident,” SAR said. The brutally slain economics student was studying Egyptian labor movements and was reportedly in the process of preparing to do field research, including identifying labor rights activists for interviews, for his doctoral thesis. Egyptian authorities have denied claims that security forces were involved in his disappearance and death.

Academics face not only pressure from authorities, but from extremists as well. Militants in Pakistan have staged spectacular attacks on Pakistani schools in the country’s volatile northwestern region, including a massacre on a Peshawar army school in 2014 that killed over 140 people.

More recently, an armed attack on a Pakistani university earlier this year killed over 20 people.

SAR condemned the “extreme, targeted, violent attack” on Bacha Khan University that killed students, faculty members and others on Jan. 20.

“In addition to the terrible loss of life and injuries, such attacks target the core values of the university, including academic freedom, the free exchange of ideas, institutional autonomy and social responsibility,” SAR said.