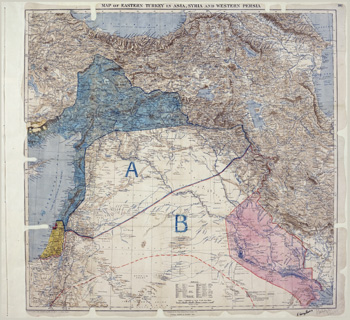 In May 1916, European powers ratified the Asia Minor Agreement, better known as the Sykes-Picot Agreement, to partition the collapsing Ottoman Empire between British, French and Russian spheres of influence. One hundred years later, the borders drawn by this secret agreement continue to influence state and regional affairs around the Levant.

This map of the Sykes-Picot Agreement shows Eastern Turkey in Asia, Syria and Western Persia, and areas of control and influence agreed to between the British and the French. It was signed by Mark Sykes and François Georges-Picot on May 8, 1916.

In November 1915, Sir Mark Sykes of Britain and François Georges-Picot of France met to begin negotiations over the dismemberment of the Ottoman Empire. The empire that had spanned more than 600 years descended into a final collapse during World War I — a war that saw the Ottomans side with the Germans.

As the world marks the 100th anniversary of Sykes-Picot this month, the agreement is largely a footnote in the annals of history for many Western countries. But its legacy remains controversial in the Middle East, where many accuse colonial powers of divvying up Arab lands behind closed doors and setting the stage for many of today’s intractable conflicts.

The Sykes-Picot Agreement was predated by the Constantinople Agreements of 1915, brokered by the Triple Entente powers of Great Britain and France. That deal promised to give the Ottoman capital and a geo-strategically important Turkish strait to Russia, while France would receive Syria and Cilicia, and Britain would annex Cyprus and declare Egypt a protectorate.

Later that year came another furtive deal: the Sykes-Picot Agreement, which further partitioned Arab territories among the victors of the Great War. It guaranteed Syria and Cilicia to France but also awarded the French large swathes of what is now Iraq. France’s sphere of influence extended to Mosul and encompassed modern-day Lebanon, as well as Turkish cities like Diyarbakir, while Britain claimed large parts of Mesopotamia, including the historic city of Baghdad. Britain also took over Haifa and ‘Akko, while Palestine was supposed to be placed under international protection. Russia was to be granted several Armenian provinces in Asia Minor as well as some Kurdish territory. Alexandria would be a free port and there would be a confederation of Arab states — or a single Arab state — where France and Britain would carve out regions to influence.

Sykes-Picot wasn’t applied in its entirety, however. A Turkish nationalist movement claimed the area that is modern-day Turkey, expelling foreign forces and establishing the state with its current borders. Britain also supported the Balfour Declaration, which provided the Jewish people with an area of land in Palestine under British control. France did maintain hegemony over Lebanon, Syria and parts of Iraq, while Britain had control of Egypt and other Iraqi land. 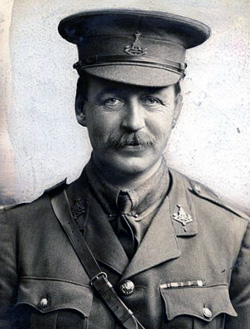 While the agreement didn’t hold in its entirety, it did set the precedent for many state borders in the Middle East and has had a profound influence over the last 100 years in how politics, conflict and confessionalism have developed in the region. Sykes-Picot and the Balfour Declaration are often credited with laying the groundwork for the Israeli-Palestinian conflict (briefly known as the Arab-Israeli conflict when Egypt and Syria got involved in the 1960s). Sectarian politics and occasional violence in countries like Iraq and Lebanon have also been blamed on Sykes-Picot at times, with critics citing the drawing of artificial borders that precluded the right to self-determination by locals. In Lebanon, for example, many living in the east would have preferred to be part of a larger Syrian state — a sentiment that persists among portions of the Lebanese population today.

More recently, the Islamic State has sought to reverse the effects of Sykes-Picot in its quest to build an Islamic caliphate.

Some have argued that with the current upheavals in countries such as Iraq, Syria and Yemen, we could be seeing the end of Sykes-Picot-imposed borders. But 100 years on, those borders have largely remained intact.

“Their borders are basically unchanged from their post-World War I creation,” F. Gregory Gause III of Texas A&M University wrote in the Washington Post. “Transjordan is now Jordan, and the old mandate of Palestine is now completely under Israeli control (with Gaza a partial exception and the West Bank in an uncertain limbo regarding sovereignty). Iraq, Lebanon and Syria … remain as they were created.” The only exception to that today would be if one were to recognize the chunk of land claimed by the Islamic State between Syria and Iraq.

“This is the ultimate analytical flaw of the ‘end of Sykes-Picot’ argument. Outsiders drew those borders. No outsiders seem to have any interest in redrawing them, or recognizing the redrawing of them, at this time,” Gause wrote.

Photo: The Education program of the National Library of Israel /

Ottoman troops line up during the Mesopotamian campaign of World War I. When the Ottomans sided with the German-led Central Powers and lost to the Allies, the British and French divided the Ottoman Empire as the spoils of war.

Many of the borders, in fact, remain durable despite years of turmoil. “First, no one questions the longevity of either Israel or Jordan. Palestinian statehood, which would have been a major shift in the map, looked closer to realization in 1999 than it does now,” Gause wrote.

He also pointed out that despite the establishment of a semi-autonomous Kurdish Regional Government in Iraq supported by Western powers, the map of the Iraqi state remains unchanged.

That does not mean governments have full control of the land inside those borders, which Gause likened to “territorial shells” created by colonial authorities and local elites.

As Gause points out, the Lebanese government is not entirely in control of its territory. The militia and political movement Hezbollah has greater influence in large parts of the country and the tribes of the eastern Bekaa region have greater authority than the central government does in many areas. The same can be said in many of the Levant’s states, especially outside of major cities. Syrian President Bashar al-Assad has lost major tracts of land to anti-government rebels and extremist groups. Iraq is also fractured, with the central government maintaining control over Baghdad, but the Islamic State taking over Mosul and other cities.

Whether borders are altered or states fragment, the legacy of the Sykes-Picot Agreement will live on in the Middle East, where some view it as a catalyst to conflict, while others see it as a scapegoat.

“This is history that the Arab peoples will never forget because they see it as directly relevant to problems they face today,” Oxford University’s Eugene Rogan, an author who writes about modern Middle Eastern history, told the Guardian newspaper last year. “The wartime partition agreements left a legacy of imperialism, of Arab mistrust in great power politics, and of a belief in conspiracies that the Arab peoples have held responsible for their misfortunes ever since.”