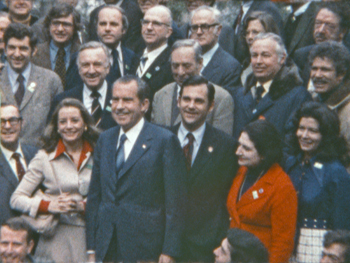 Also See: ‘The Act of Killing’ and ‘The Hunt’ and Repertory Notes

President Richard Nixon is surrounded by nearly 90 members of the press corps, including Helen Thomas to his left and Barbara Walters to his right, during Nixon’s historic trip to China in 1972. “Our Nixon” uses reams of original source material to document Nixon’s presidency.

American director/co-producer Penny Lane’s distinctively personal documentary “Our Nixon” celebrated its D.C. premiere at the recent AFI Docs film festival, right off the National Mall in the historic National Archives, fittingly where much of the documentary’s primary source material resided.

The packed “Our Nixon” premiere was an example of the ambitious efforts by AFI Docs, newly rebranded after 10 years as Silverdocs, to expand beyond its previous base in Silver Spring, Md. (also see “New Decade, New Name for Expanding Documentary Showcase” in the June 2013 issue of The Washington Diplomat). After the premiere, CNN’s “The Lead” anchor Jake Tapper moderated a panel, including remarks from two senior aides to former President Richard Nixon: speechwriter Lee Huebner and special assistant Dwight Chapin.

Only a few documentaries have been made about the ignominious presidency of Nixon, who resigned in disgrace under threat of impeachment from the Watergate scandal. Yet “Our Nixon” provides a particularly unique perspective with its high use of original source material. To accurately depict the Nixon presidency’s rise and fall as it actually appeared at the time, Lane and co-producer Brian Frye adroitly utilize a bevy of historical footage, which Lane calls “the best way to experience history as it was lived.”

Stock interview and news clips include Chapin’s observation in 1974 about Watergate, when he proclaimed, “I don’t think you can take that little piece of history, which may have been the darkest days of Richard Nixon’s career, and construct, from that, a mosaic that tells you all about the man.”

“Our Nixon” exposes intimate scenes carefully selected from more than 500 reels of previously forgotten home movies shot in Super 8 by whiz kid Chapin, White House chief of staff H.R. Haldeman and domestic affairs advisor John Ehrlichman. Their individual film diaries visualize the Nixon administration’s early excitement following Nixon’s election in 1968, capping his remarkable political comeback after losing the 1960 presidential race to John F. Kennedy and the 1962 California governor’s election to Pat Brown. It continues with the political successes and public goodwill surrounding landmark events such as NASA’s Apollo 11 landing on the moon in 1969, the White House Rose Garden wedding of Nixon’s daughter Tricia in 1971, and Nixon’s historic diplomatic visit to China in 1972. That year, Nixon overwhelmingly won re-election, nabbing an extraordinary 49 out of 50 states in the Electoral College.

Though lacking video, equally candid are audio selections sifted from close to 4,000 hours of audiotapes secretly recorded in Nixon’s White House. Complemented by news reels, these tapes recall how Nixon’s presidency was later engulfed by escalating turmoil, including protests and opposition to the Vietnam War, rising mutual mistrust between the White House and the media, the damaging leak of the Pentagon Papers, and the shocking revelations of the Watergate break-in. 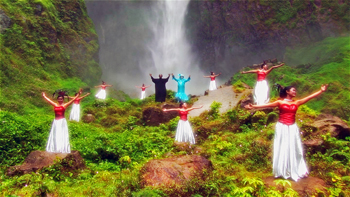 The leaders of Indonesian death squads who went on a killing spree in the mid-1960s to purge the country of communists re-enact their genocide in spectacular fashion in “The Act of Killing.”

At AFI Docs 2013, one of the most disturbing, innovative and must-see films was “The Act of Killing,” directed by American filmmaker Joshua Oppenheimer (“The Entire History of the Louisiana Purchase”) and executive produced by German auteur Werner Herzog (“Encounters at the End of the World,” “Grizzly Man”) and American master documentarian Errol Morris (“The Fog of War,” “The Thin Blue Line”). Morris was also fêted at the National Archives for his lifetime body of work as the 2013 honoree of the prestigious Guggenheim Symposium at AFI Docs.

In the filmmakers’ radical approach to documentary storytelling, “The Act of Killing” depicts the strange tale of Indonesian killing squad leaders by deploying outlandish cinematic visual stunts in which the actual criminals, including main subject Anwar Congo and his colleagues, role-play in front of the camera. The leaders are asked to re-enact their real-life mass killings in whichever cinematic genres they choose, including classic Hollywood crime capers and lavish musical numbers.

The psychedelic result provokes challenging questions about reality, morality and society — declining to dispense overly simplistic answers digestible in readily understood sound bites. In “The Act of Killing,” the real-life mass murderers take pleasure dancing in choreographed musical numbers. They also act as cowboys who yodel while they happily work and ride down the prairies. Perhaps closer to home, the death squad leaders portray classic gangster parts in re-enactments of organized crime shot in film noir tradition — all while re-enacting gruesome, merciless killings.

“The Act of Killing” delves into a peculiar aspect of contemporary Indonesian society in which the heads of death squads are still celebrated as national heroes. The state-sanctioned killers were led by the likes of Anwar, who rose from petty criminal to his current status as a self-confessed mass murderer proud of personally taking the lives of hundreds. After a 1965 coup that took down the existing government, assassin teams proliferated to wipe out the new enemies of the state: alleged communists and their sympathizers. The hit squads’ brutal purge accumulated into a full-fledged genocide, leaving an estimated 500,000 up to 1 million dead across Indonesia (backed in part by Western governments).

Since Anwar and his contemporaries have already been quite open about their past misdeeds, for which they have effectively enjoyed immunity, they were more than happy to cooperate with the filmmakers for “The Act of Killing.” Their brazen lack of remorse and flippant attitude toward mass murder can be both mesmerizing and nauseating. At one point, Anwar matter-of-factly says, “War crimes are defined by the winners. I’m a winner.”

But Oppenheimer’s documentary wasn’t seeking to merely shoot interviews in which the killers confess to their crimes on camera, which would be gotcha moments for standard documentaries. Instead, he offers an extraordinarily surreal look at genocide that startles the senses, and scruples — atrocities that Anwar and his buddies were more than happy to orchestrate and participate in, both in real life and on screen. 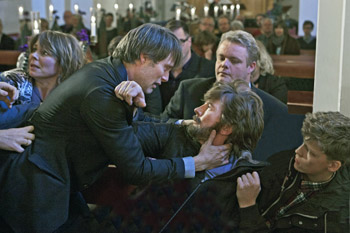 Mads Mikkelsen, left, plays a teacher whose attempts to rebuild his life are derailed by a child’s wrongful accusations in “The Hunt.”

Following its world premiere at the 2012 Cannes International Film Festival, “The Hunt” has been widely called the best work from respected Danish writer-director Thomas Vinterberg (“Submarino,” “It’s All About Love”) since he helmed 1998’s “The Celebration.” At Cannes, “The Hunt” built a lot of buzz, though Vinterberg lost the coveted Palme d’Or to Michael Haneke for “Amour.”

As a consolation prize, Vinterberg did take home the Prize of the Ecumenical Jury, while Danish leading man and international crossover star Mads Mikkelsen (“Casino Royale,” “A Royal Affair”) deserved his Best Actor prize at Cannes for his intense, haunting portrayal of wrongfully accused protagonist Lucas.

Vinterberg and co-writer Tobias Lindholm’s intelligent screenplay deftly lays out an intricate story architecture: Following the double whammy of a rough divorce and losing his job, highly admired schoolteacher Lucas (Mikkelsen) must start again. He has endured limited visitation privileges with his teenage son Marcus (Lasse Fogelstrøm), but things look promising for Marcus to return to live with Lucas full time. Lucas is also hired as a kindergarten teacher, which leads to a potential budding romance with a foreign colleague (Alexandra Rapaport).

Meanwhile, his 5-year-old student Klara (Annika Wedderkopp), the daughter of his best friend Theo (Thomas Bo Larsen), develops a playful crush on him. When her physical affection exceeds societal norms, he carefully resets his boundaries with her, which she interprets as rejection, hurting her immature feelings. Her imagination leads her to wrongfully accuse Lucas of indecent exposure, which shatters Lucas’s modicum of progress rebuilding his life. Klara’s false claim spreads like wildfire throughout their small, tight-knit community, damning poor Lucas who is assumed by most to be guilty before proven innocent. For the most part, he must stand alone in defending himself from the ensuing witch hunt.

“The Hitchcock 9” retrospective of British-born master of suspense Alfred Hitchcock’s silent films restored by the British Film Institute, presented with AFI Silver, concludes at the National Gallery with a ciné-concert of “The Pleasure Garden” with live musical performance by Andrew Simpson (Sun., Aug. 4, 4:30 p.m.).