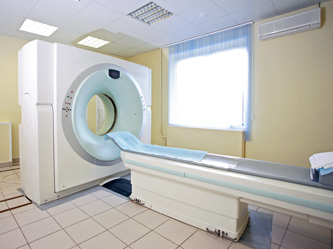 You might call this the “scanned generation.” Just a few decades ago, the only body scanner most people ever saw was an X-ray machine, if they broke a bone or, more commonly, when they got dental X-rays.

Today, we have MRI scans, functional MRIs, CT scans, PET scans, MR and CT angiography, ultrasound, and a variety of other techniques used to develop specialized images of the body and its bones, tissues, blood vessels and organs in various states of illness and disease.

But all of these high-tech images don’t come without a price. The contrast agents and radiation involved with creating the images that radiologists and other physicians rely on to diagnose illness and determine the effectiveness of a therapy (is that tumor shrinking?) have side effects of their own.

One form of imaging technology in particular that is very common is the CT (computed tomography) scan. Approximately 80 million CT scans are performed annually in the United States alone. They are often used in conjunction with other imaging tools to pinpoint the size and location of cancers and other diseases, to detail complex fractures, and to assess heart function — providing critical visual images that can save lives.

More recently, some have pushed for CT scans to be used as part of preventive medicine — to detect disease early, before symptoms have appeared. There is some evidence that this can be useful. Last year, the National Lung Screening Trial found a 20 percent reduction in deaths among heavy smokers with no signs of cancer who were screened annually with a helical CT scan, as compared to those who had standard chest X-rays. The trial involved more than 53,000 people over five years, by which time there were 354 deaths recorded in the CT group versus 442 in the X-ray group.

That’s a relatively small reduction in risk, but it’s still 88 people who didn’t die an ugly death from lung cancer who otherwise might have. And since lung cancer — which kills 160,000 Americans each year — is usually diagnosed in its advanced stages, and the five-year survival rate is just 15 percent, making even small cuts in the lung cancer death rate could save a lot of lives. It could also save a lot in health care costs.

On the other hand, CT scans themselves aren’t cheap, and they also have many false positives — leading to unnecessary tests that can drive up already-soaring health care costs. That of course harms society as a whole. But then there’s also the individual harm associated with radiation. In the CT quest to detect cancer, are patients running an increased risk of developing cancer down the line?

Imaging tests in general are now responsible for half of the overall radiation that Americans are exposed to, compared with roughly 15 percent in 1980. A 2009 study in the Archives of Internal Medicine estimated that 29,000 additional cancers in the future could be linked to one year’s worth of CT scans.

Whether it’s a smoker being scanned for signs of cancer, a heart patient having their cardiac function imaged, or an accident victim having a fracture assessed, anyone who has a CT scan of any kind is exposed to some degree of radiation. Even the lower-dose helical, or spiral, CTs used in the lung cancer study emit several times more radiation than that of a standard X-ray. Done only once, it may not be a big deal. But repeat exposures over the course of a lifetime could cause new cancer in a person who got their CT scans to prevent or help battle cancer in the first place.

“There is a strong case to be made that too many CT studies are being performed in the United States,” wrote Dr. David Brenner, director of the Center for Radiological Research at Columbia University in New York, in a 2007 review article in the New England Journal of Medicine. He suggested that CT scans are being particularly overused in certain contexts, such as the management of blunt force trauma, seizures and headaches, as well as in “defensive medicine.” Brenner pointed out that a 2004 survey of physicians found that 53 percent of radiologists and 91 percent of emergency room physicians did not believe — contrary to the evidence — that CT scans increased the lifetime risk of cancer.

“If it is true that about one third of all CT scans are not justified by medical need, and it appears to be likely, perhaps 20 million adults and, crucially, more than 1 million children per year in the United States are being irradiated unnecessarily,” Brenner wrote.

And that has consequences. A study from a team of Italian researchers, published March 1 in the Journal of the American Society of Nephrology, found that regular exposure to radiation — most of it from CT scans — significantly raised the risk of cancer for people on dialysis. Of the 106 patients in the study, 17 of them received radiation at levels associated with a substantial increase in the risk of cancer-related death.

Two initiatives are now pushing for more judicious use of imaging. The Image Gently campaign (www.imagegently.org) focuses on children, who are at particular risk from overuse of CT scans and other radiation, while the Image Wisely campaign (www.imagewisely.org) focuses on adults. The sites include protocols for imaging professionals and information for patients and families, such as a wallet card to keep track of total radiation exposures.

Experts continue to struggle with the issue, and often it is left to individual doctors to weigh the risks and benefits of a CT scan for each patient and their particular condition. A CT scan of the chest in a person who may have a blood clot in the lung, for example, could detect an immediate, life-threatening condition.

“CT will never go away, partly because there are certain parts of the body that are better imaged by CT — one of them is the lungs,” wrote Dr. James A. Brink, chair of diagnostic radiology at Yale School of Medicine, last year. “If CT scanning is needed medically, individuals should not shy away from having the test, as the risk of a fatal cancer from the associated radiation exposure [1 in 2,000 to 4,000] is very low as compared to the lifetime risk of developing a fatal cancer [1 in 4 or 5].”

At the same time, Brink, part of the Image Wisely awareness campaign, says doctors must balance the potential future cancer risks with the necessity of the test and try to minimize the impact as much as possible. “As such, we must reduce CT scanning doses to levels that are as low as reasonably achievable, and use CT scanning only when other imaging tests won’t suffice.”