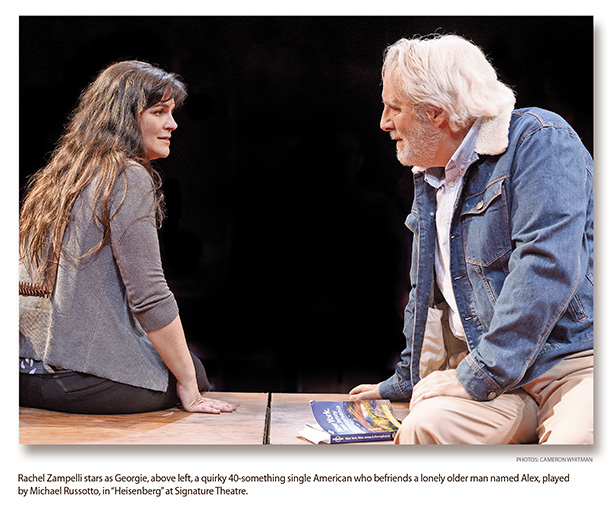 German quantum mechanics physicist Werner Heisenberg proposed in the beginning of the 20th century what is known as the “uncertainty principle.” This states that at the subatomic level, one cannot simultaneously measure the position and velocity of a particle accurately.

The play “Heisenberg,” now showing at Signature Theatre, has adopted its name as an analogy to the uncertainties of human existence. To be specific, playwright Simon Stephens’s title suggests that the play’s personalities and fates are possibly random and unpredictable, and require a leap of faith.

In theory, this is correct. The play consists of only two characters: Georgie Burns, played by Rachel Zampelli, and Alex Priest, played by Michael Russotto. The unlikely pair meet randomly at a London Underground station and, over a matter of a few weeks, fall in love. Georgie is a 40-something single American woman who is struggling to find peace with past personal tragedies while Alex is a lonely 75-year-old Irishman, stressed over his failing butcher shop with little to distract him from his troubles. Indeed, although they are a match in terms of loneliness, their love affair appears accidental and wayward.

Ironically, though, the plot seems too predictable and (not to sound too curmudgeon) a bit corny. Perhaps the narrative is guilty of trying too hard to prove to the audience that, yes, opposites really do attract. Whatever the cause, from the start it is apparent that these two will end up filling each other’s emotional gaps, which robs the audience of the ideal element of surprise. The only thing that is uncertain is just how they will end up together.

The two are almost stereotypical opposites. Georgie’s outward appearance is frenzied and chaotic. At first meeting she greets Alex with an unsuspecting kiss on the neck, thinking he is someone else, and then launches into an uncontrolled speech that she considers flirting. Alex’s actions and words, on the other hand, are carefully measured, slow to respond and succinct when he does on rare occasion find room to react in between Georgie’s outbursts. Georgie makes up stories about her life, then retracts them, so one is never sure of her truth, while Alex is as honest and straightforward as a shiny new nickel. 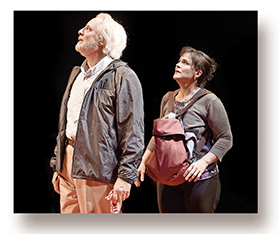 Maybe they are so contradictory that one can’t fathom anything other than their eventual pairing, however awkward and bumpy that union may be. It feels, however, that their unlikely relationship is at times forced.

Still, their romance is filled with touching moments, which makes the audience invest in their fates, individually and as a couple. As it turns out, Georgie uses her annoying outpourings to hide a painful falling out with her son. He has left to live in the United States and has severed all contact with her. Meanwhile, Alex has his own secrets and frailties. He still pines after a lost love that happened decades before and laments losing a sister when he was a child. He admits that he has “a crying problem” but is disgusted with people’s preoccupation with feelings. Yet, his only outlet is to take long walks alone. It’s hard not to feel for these two damaged souls.

Just like it is hard to pull off a one-person show, it is almost just as difficult to do justice to a two-person script. Zampelli and Russotto do a fine job overall but sometimes struggle with believability. For example, numerous times, Zampelli’s character says she’s going to leave and then theatrically stops herself, which feels staged as opposed to genuine. On the flip side, Russotto’s Irish drawl appears flawless.

Director Joe Calarco has staged the play in a black box theater in the round, with few props and a minimalist set, which puts even more pressure on the acting. Pamela Weiner’s set consists of only a square floor and a pair of tables with folding panels that serve as a subway platform, Alex’s bed and pub furniture. The actors configure the tables, in character, when the setting changes. The minimalism effectively puts most of the focus on the characters’ interactions without any distraction, but minus stellar, consistent acting, it makes it that much more difficult to sustain the audience’s suspension of belief.

At the end of the day, “Heisenberg” is a quirky, tender love affair that is engaging and unique. The challenge is to make the audience as much in love with the script as the characters are with each other.