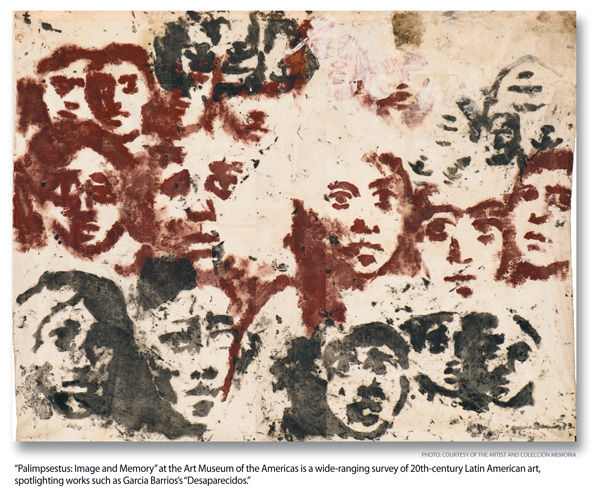 The OAS Art Museum of the Americas offers a sweeping survey of Latin American art over the last century in “Palimpsestus: Image and Memory.”

There are 70 artworks on display, spanning from 1900 to 2014, with over 30 artists from 10 countries featured in the exhibit, which is curated by Alejandro de Villota Ruiz. It was a three-year project for Ruiz, who said the exhibit captures the “magic realism” of Latin America.

The exhibit, presented in collaboration with the Permanent Mission of Mexico to the OAS and the Mexican Cultural Institute, is an overview of the main artistic trends and cultures that emerged in Latin America in the second half of the 20th century. It highlights works drawn from Colección Memoria, assembled by Ruiz, as well as a selection of iconic modern and contemporary pieces from the OAS permanent art collection.

The term palimpsest is reference to the scarcity of paper as a good for roughly 15 centuries. It is defined as a manuscript or piece of writing on which the original writing can be erased to make room for more writing, even though traces of the old remain. Ruiz wanted to use this concept to show the relativity and interrelation of art narratives and aesthetic discourses. 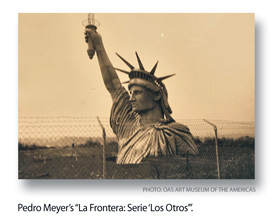 While every single piece of artwork espouses its own meaning, Ruiz encourages guests to think about the whole symbolic meaning of the artwork in general. It really is a “cabinet of curiosities,” he added.

Ruiz has a personal connection to the exhibit: He is the son of one of the artists in the project. “I’m curating my own father’s work in the exhibit; it has a personal meaning and feeling to me,” he said. “Every piece in the show is very special.”

The exhibit dives deep into art movements from abstraction to new figuration. Pieces range from Chilean painter Gracia Barrios’s haunting collection of anonymous, barely distinguishable faces in 1973’s “Desaparecidos” to Mexican photographer Pedro Meyer’s provocative 1985 depiction of a semi-buried and fenced-off Statue of Liberty in “Lost Otros.” There’s also work that examines the notion of collective memory through an experimental curatorial exercise based on anachronistic and antagonistic visual essays. 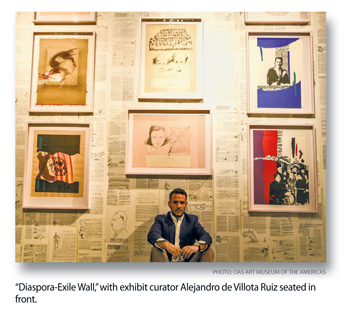 “Artists reflect the memory of events,” Ruiz said. “I’ve tried to put together memory and critical moments in 20th-century Latin America and Europe.”

The exhibit is broken down into three thematic sections based on chronology and geography. Mainstream aesthetics are introduced in “A(rt)nachronism,” followed by “The Bestiary” and “Diaspora: Reconstructing Identities,” reflecting on the exile of artists to Latin America during the Spanish Civil War (1936-39).

The core of the exhibit lies in “The Bestiary,” which contains 20 drawings by Spanish artist Javier de Villota, who is Ruiz’s father. The 20 drawings called “The Grays” are a reference to the popular name given to longtime Spanish dictator Francisco Franco’s armed police forces. Villota’s swirl of colors and menacing, amorphous figures hint at the violence percolating beneath the abstract depiction. The pieces also connect to the larger turmoil of the period, including the dictatorships that reigned in Latin America and Europe and suppressed freedom of expression around the world.

Ruiz, who collaborates with the Museum of Fine Arts of Houston and works in Spain and Mexico, told us that the exhibit transcends cultures, time and borders. “We have something that differentiates us from animals and that is creating beauty,” he said. “It is very interesting and something I believe is universal.”