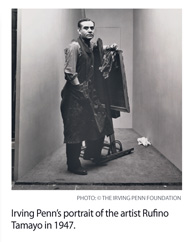 The Smithsonian American Art Museum’s innovative exhibition on Mexican modernist Rufino Tamayo explores the links between the artist’s dynamic work and the vibrant world of New York’s art scene in the 20th century.

“Tamayo: The New York Years” takes a look at the way the artist was shaped by his time living in the city intermittently from the late 1920s to 1949, and how he infused that transformative experience with his study of pre-Columbian and Mexican folk art to develop his own vision. The inventive show also reflects on the ways he crossed borders and influenced other artists with his aesthetic focus, placing Tamayo at the heart of American modernism in the last century even as his path diverged from some of the most famous Mexican artists of the era.

E. Carmen Ramos, the museum’s deputy chief curator and curator of Latino art, wanted to host an exhibition that drew attention to a prominent Latin American artist who “had an important impact on American art.” She said she was interested in expanding beyond the more widely known Mexican muralism movement and exploring “the next chapter of that impact.” Tamayo — with his aesthetic focus and melding of modernism with Mexican culture — emerged as a natural focal point for a new show, she told The Washington Diplomat. 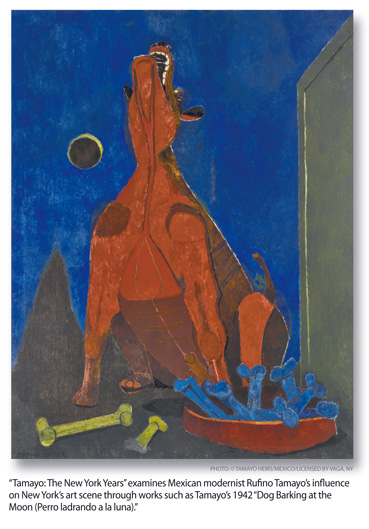 Through his time in New York, Tamayo was able to interact with key artists such as Stuart Davis and Reginald Marsh and to see, for the first time in person, the works of major European artists such as Pablo Picasso and Georges Braque. “Coming to New York was really important to him in exposing him to a whole world of art making,” Ramos noted.

“That transformed his approach to Mexican art, his dedication to formal issues. He remained committed to wanting to represent Mexican culture and Mexican history. But he approached it in a very different way from the muralists, and I thought that was an important story to tell,” she said.

According to the museum, the exhibit considers how New York, with its sights, artists, critics, collectors and venues, “nurtured Tamayo’s vision of modern Mexican art. In this context, he created an art that resisted clear narratives, emphasized the creative rather than political underpinnings of art making and mined the ancient myths and forms of indigenous art to express the existential crisis of World War II.”

For example, after seeing Picasso’s “Guernica” and a retrospective on the artist at the Museum of Modern Art, Tamayo was so impressed with Picasso’s imagery and use of African art that he reconsidered his own use of Mexico’s pre-Hispanic and folk art in a series of wartime paintings.

“By the 1940s, his richly colored and abstracted compositions modeled an alternative ‘American’ modernism that challenged social realism and dovetailed with a rising generation of abstract expressionists who were also seeking a visual language that fit their uncertain times,” according to an exhibition press release.

Tamayo’s work “becomes emblematic of a new phase in the art of the Americas, one that very much engaged in representing the crises of the day in a language that was much more emotive and formal,” Ramos said.

“His work and ideas really overlap with the burgeoning generation of abstract expressionists who were familiar with his work and also found inspiration — not so much from his actual art making and the mechanics of his art making — but from his outlook and how he was positioning Mexican art in a local and universal, international way,” she added.

Tamayo’s work is notable for its often playful and dreamy approach to subjects, with objects and figures that float through the space of his canvases. Wandering through the gallery, museumgoers are able to trace the artist’s thematic interests and explore his visions of both the modern city and of Mexican traditions. His paintings grab the eye with their rich colors and use of symbols — a massive dog set against a stunning blue background howls at the moon, statuesque figures hold the viewer’s gaze in family portraits, and an exuberant clown that seems to pop out of the painting grins at passersby. 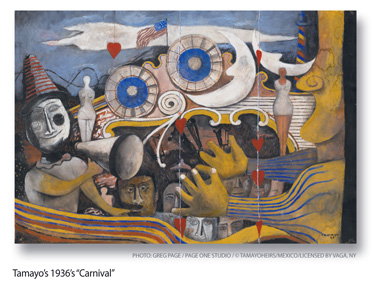 The Mexican diplomatic community played a key role in this exhibition, Ramos noted. Gerónimo Gutiérrez Fernández, Mexico’s ambassador to the United States, serves as the honorary patron for the exhibition, and the Mexican Cultural Institute also provided support. And that assistance offers a reminder of the importance art played in diplomatic relations between the United States and Mexico in the 1920s.

“Tamayo plays a slight role in that. His work was exhibited in exhibitions that were being actively promoted by the Mexican government during the 1920s, when Mexico was trying to rehabilitate its image after the Mexican Revolution,” Ramos said. “They had a great desire to spread knowledge of Mexican culture, so that diplomatic period in Mexican and U.S. history was really critical to the development of Mexican art in the United States.”

This exhibition highlights the fascinating ways that crossing borders influences an artist’s vision and the larger world of international art. In the colorful, lush works on display, viewers also catch a glimpse of the way art and diplomacy are intertwined, making it a must-see show for Diplomat readers.