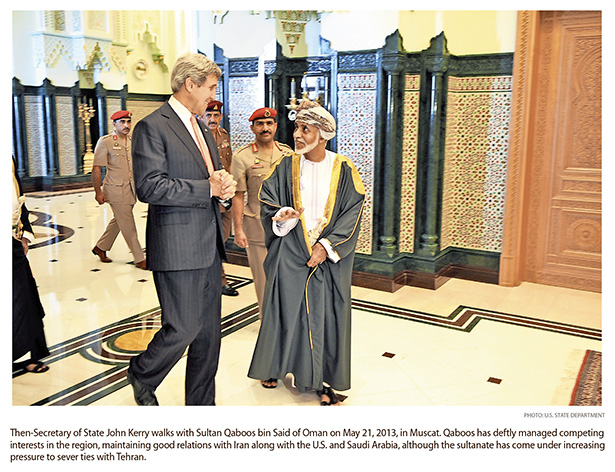 MUSCAT — With the punishing new wave of U.S. sanctions against Iran now underway — alongside the heated rhetoric between Tehran and Washington — this may not seem the ideal time for any government to be inviting its Iranian friends over for dinner.

Yet that is exactly what continues to happen here in Muscat, capital of the Sultanate of Oman, which has long been close to both the U.S. and the Islamic Republic.

Thus, while President Trump has been urging all nations to isolate Iran after he ditched the nuclear accord negotiated under President Obama, National Iranian Oil Company officials were also heading to the Omani capital to discuss a boost in cooperation over drilling.

If constructed, this would pass outside the strategic Strait of Hormuz, a key oil chokepoint watched over by the U.S. Navy and the Iranian Revolutionary Guard Corps. The Navy uses bases in Oman to support this role and indeed, the new Omani port of Duqm, in the center of the country and on the Indian Ocean, is already being used by the U.S. 5th Fleet for repairs and maintenance.

Yet at the same time, up above the harbor, discussions are also ongoing for the construction of a major Iranian car plant.

Oman has thus long performed a skillful, albeit low-profile, balancing act between Washington and Tehran, as well as among a host of other international and regional rivals.

Duqm, for example, is also a major focus for Chinese investment — yet Oman has granted China’s rival, India, naval basing rights there, too. It has also recently been promoting the port during an investment road show in Japan.

In addition, Oman has quietly maintained unofficial ties with Israel for decades, a relationship that came into public view late October when Israeli Prime Minister Benjamin Netanyahu visited Muscat, along with Mossad chief Yossi Cohen — a move that disturbed some in the Arab world but not Oman’s pragmatic ruler, Sultan Qaboos bin Said. The meeting was part of Israel’s efforts to improve ties with the Arab world and isolate Iran. Tehran denounced the visit but did not follow up publicly with any action, likely in recognition of its reliance on Qaboos.

The 78-year-old leader had been careful, too, to meet Palestinian Authority President Mahmood Abbas just a few days before he met Netanyahu, possibly to soothe Palestinian fears that Israel is cozying up to Arab leaders to sideline the Palestinians in any eventual peace deal. Some have even speculated that the visits may be a sign that Oman might play a backchannel role in President Trump’s envisioned “deal of the century” between the Israelis and Palestinians, or act as a conduit to Iran for Israel.

Switzerland of the Mideast

This ability to walk both sides of the line is testimony to the diplomatic adroitness of Oman’s leaders, and in particular its now aging and ailing ruler, Sultan Qaboos.

Steering a neutral course through decades of regional conflicts has helped the sultanate keep a high degree of independence from its more powerful and richer neighbors. It has also won Oman many friends in the wider world, with Qaboos acting as an honest broker and mediator in a range of disputes, stretching back to the 1970s.

That in turn has helped transform Oman from a desolate backwater prior to Qaboos’s bloodless coup against his father in 1970, into a modern nation with a high-income economy, relative stability and regional influence (also see “Oman Assumes Low-Key but Influential Role in Mideast Affairs” in the January 2015 issue of The Diplomat).

Now, though, questions are being raised as to how much longer the country can keep up this precarious balancing act.

Oman’s role as a neutral arbitrator is under threat as the sultanate faces a looming succession crisis, along with a protracted economic downturn.

At the same time, its openness to all sides is also becoming increasingly irksome to Oman’s Gulf Cooperation Council (GCC) partners, especially Saudi Arabia and the UAE.

Their proxy war against Tehran has become a defining feature of the contemporary Middle Eastern security and diplomatic landscape, from Yemen to Iraq. Yet Oman has so far refused to join them in this regional power struggle.

“Oman has largely attempted to work behind the scenes and to emphasize their neutrality on controversial conflicts,” said Oman expert Jessie Moritz of the Centre for Arab and Islamic Studies at the Australian National University. “It’s a strategy that makes a lot of sense for a small state with large and powerful neighbors.”

Sharing opposite sides of the Strait of Hormuz, the vital narrow waterway through which around a third of the world’s sea-born oil and gas ships daily, Oman and Iran’s relationship stretches back centuries.

In more recent times, in the 1970s, prior to the 1979 Islamic Revolution, Shah Pahlavi sent troops to help the then-young sultan put down a Marxist revolt in the southern province of Dhofar. During the 1980-88 Iran-Iraq War, Muscat was the venue for secret peace talks, while the sultanate has also mediated disputes between the U.K. and Iran, Saudi Arabia and Iran, as well as the U.S. and Iran.

In fact, Oman was key in laying the groundwork for the Iran nuclear deal, hosting a number of backchannel talks between the Obama administration and Tehran that later evolved into the landmark agreement to curb Iran’s nuclear program in exchange for sanctions relief.

Now that Trump has dumped the nuclear deal and reimposed sweeping U.S. sanctions on Iran’s energy and banking sectors, Oman will have to tread carefully to avoid angering the administration.

Oman was not among the eight countries — including Japan, China and India — granted temporary exemptions from the U.S. oil sanctions. And it will likely come under mounting pressure from Washington and Riyadh to distance itself from Tehran.

Some observers say the White House should not alienate Oman because it can still serve as a valuable intermediary with Iran and its proxies in Syria, Yemen and elsewhere. Oman’s influence, however, has waned because unlike Obama, Trump seems to have little interest in engaging with Iran.

On the other hand, Oman’s quiet, unassuming presence may help it fly under Trump’s radar.

“Regional rivals and external powers probably do not regard the country’s posture as being vital to the achievement of their aims,” said John Calabrese, scholar-in-residence at the D.C.-based Middle East Institute. “So, Oman might be spared some of the pressure that would presumably be exerted on others.”

“In terms of political relations between Oman and Iran, I don’t think the new U.S. sanctions will have much impact,” said respected Omani commentator and academic Abdullah Baabood. “Oman doesn’t want any more malignant action in the region, so it needs to keep good relations with Iran. Economically, there’s not a lot of trade going on right now, and the natural gas pipeline is something people have been talking about for a long time without it happening, even without the sanctions.”

Yet Oman’s neutral mediating role has made it enemies, as well as friends.

Yemen is a major case in point. Oman declined to join the Saudi- and Emirati-led intervention in 2015 and instead has tried to help U.N. efforts to mediate in the conflict, which has killed at least 10,000 people and wrought misery on the Arab world’s poorest country. Riyadh and Abu Dhabi have since alleged that Oman has been dragging its heels in enforcing security along its border with Yemen, allowing Iranian arms to be smuggled across to Houthi rebels — a charge Oman vehemently denies.

In 2017, Oman also refused to join the Saudi- and Emirati-led blockade of Qatar. Instead, Muscat joined Kuwait in efforts to mediate the dispute. Since then, Oman’s economic relations with both Qatar and Kuwait have expanded, as relations with Saudi Arabia and the UAE have deteriorated. 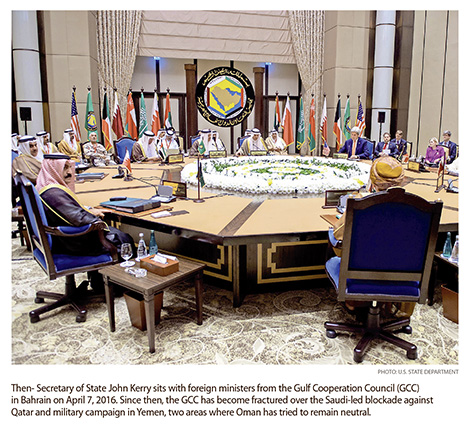 The furor over the murder and dismemberment of Saudi journalist Jamal Khashoggi at the Saudi consulate in Istanbul has injected another element of uncertainty into the region’s dynamics — and contributed to growing fears over Saudi ambitions under its brash young heir, Mohammed bin Salman.

Indeed, many ordinary Omanis have become wary of the increasingly aggressive posture of both Saudi Arabia and the UAE.

This sentiment goes back at least to a 2011 spying case in which Omani intelligence uncovered what was allegedly an Emirati espionage ring in Muscat. Another “sign” often talked of in Muscat is the more recent unveiling of a map in the Louvre Abu Dhabi that showed the Omani province of Musandam — on the Strait of Hormuz — as part of the UAE.

“People notice things,” said Baabood. “For example, when Trump went on his first foreign visit, to Riyadh, he met all the Gulf country representatives, except Oman’s. So this was seen as a sign that certain powers in the region had been influencing the U.S. to support their views and put pressure on Oman to come into line.”

This fuels a genuine fear in Muscat that the GCC’s two richest heavyweights are trying to assert control over their neighbors — and undermine Oman’s traditional policy of neutrality and independence.

“There has been a lot of discussion over the last year of the likelihood that the GCC’s tolerance of Omani neutrality has come to an end,” said Moritz.

Yet Oman has a long history of negotiating the often-treacherous waters of the Gulf.

In the past, the nation of 4.6 million has been able to withstand pressure from its neighbors, maintaining its independence through its moderate, pragmatic approach to the region’s hostilities.

But Oman’s ruler is getting older and has been suffering from a lengthy illness. Childless, his successor is unknown, creating worries over the country’s future direction. At the same time, Oman has suffered more than many GCC countries from the recent protracted downturn in oil and gas prices, placing its energy-dependent economy under pressure.

Some have speculated that Netanyahu’s high-profile visit to Oman — the first by an Israeli leader in over 20 years — may have been a recognition by Qaboos that his country’s ties with Iran cannot come at the expense of relations with its GCC neighbors or the U.S.

Steven A. Cook, writing in a Nov. 7 article for Foreign Policy, put it more bluntly, arguing that Qaboos courted the Israelis — and by extension the U.S. — to ensure Oman’s future without him.

“Why did Qaboos go so far out on a limb? Essentially, he was taking out an insurance policy,” Cook wrote. “Oman’s new leader — whoever that may be — will need U.S. political and diplomatic backing when Qaboos dies to bolster the country’s stability at a critical moment. Under ordinary circumstances that support would be forthcoming, but given the conflicts and forces — both internal and external — buffeting the Gulf, there are no guarantees. Oman’s role in the region as discreet interlocutor and broker of deals makes Muscat important beyond its size and resources, but it is also vulnerable.”

That vulnerability has increased as Riyadh and Republican hardliners seek to contain Iran, but whether Muscat will cave to the pressure remains to be seen.

“There is a lot of concern, at an unofficial level, given the leadership issue, [about] the economic situation and questions over the intentions of some who want Oman to support the Saudi and Emirati line and cut ties with Iran,” said Baabood. “But we don’t think their regional policies will lead to more peace and cooperation. They will just add more conflict to a region already beset by it.”