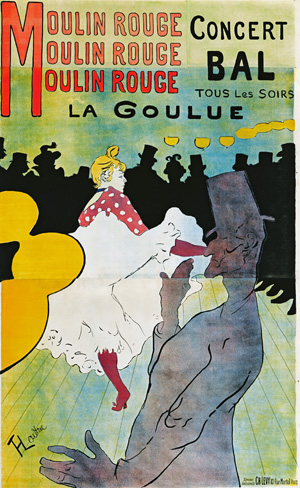 “Moulin Rouge: La Goulue” was Henri de Toulouse-Lautrec’s first attempt at printmaking and made the artist an overnight sensation in 1891.

With loose sketches and brilliant splashes of color, Henri de Toulouse-Lautrec captured the lurid and decadent world of late 19th-century Montmartre — and Washingtonians can step back into it at the newest exhibition inside the Phillips Collection.

“Toulouse-Lautrec Illustrates the Belle Époque” showcases 96 works by the French artist, presenting an impressive collection of images spanning nearly his entire printmaking career. Many pieces are on view for the first time in the United States, said Renée Maurer, associate curator at the Phillips, which organized the show along with the Montreal Museum of Fine Arts.

“It’s a rare opportunity to have so much Lautrec here at one time,” Maurer told The Washington Diplomat.

The show hums with the movement and thrills of the Belle Époque, capturing the dynamic cabaret, café and dance hall scenes that epitomized Parisian nightlife. Thanks to its massive size and its narrow focus on one era — through the vision of one iconic artist — the exhibit transforms into a truly immersive experience for visitors. The repetition of proofs and prints in their different states becomes a way to fall deeper into the world of bohemian Paris. The posters seem freshly ripped from city streets, while the quick sketches of real people feel as if they were just finished, thrown up on the wall after a drawing session in a nightclub.

The exhibition starts with a bang thanks to the spectacular “Moulin Rouge: La Goulue,” Toulouse-Lautrec’s first attempt at printmaking. It made the artist an overnight sensation in 1891, with more than 3,000 copies printed. The image encapsulates everything that would come to define his approach to lithography, Maurer said, with its focus on color, silhouettes, dynamic viewpoints and the embrace of the star and the narrative.

The richly vibrant, large-format lithograph is hung alongside its black-and-white trial proof — a joy for anyone fascinated by an artist’s process. This is repeated several times throughout the exhibition, with notable finished works accompanied by trial proofs in various stages of development. 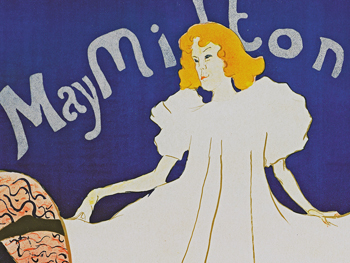 “When we installed the show, we wanted to make sure the trial proofs and final impressions were side by side to really understand the process,” Maurer noted. “You get a better understanding of how Lautrec approached color in a very definitive way, a very impactful way.”

The proof and print of the luscious Art Nouveau lithograph “Jane Avril” from 1899, his final image of the dancer, are both stunners. Set up side by side, you’re able to see Toulouse-Lautrec’s gift for color, movement and perspective — and how he understood the need for brilliant drama in a poster for public consumption.

Another set of Jane Avril posters from 1893 take you even deeper through the artistic process of Toulouse-Lautrec. There’s an unrecorded trial proof — recently discovered, and not in any publication, Maurer noted — without text or color, as well as a later proof and a bold final print. “You see the progression in the development of the poster image that is remarkable to showcase,” she said.

Theatricality and performance captivated Toulouse-Lautrec, an obsession matched by his fascination with what happened behind the scenes and in the audience. The images on view show that push and pull between what is considered public versus private. Toulouse-Lautrec’s deep exploration of this dynamic and how it blended together in theater, life and art is especially fascinating given that his posters served as a medium aimed squarely at the masses.

Toulouse-Lautrec was interested in the lurid elements of daily life in turn-of-the-century Paris, as seen in his depiction of the scandalous American heiress Clara Ward in a theater audience in his 1897 work “A Princely Idyll.” Ward gained notoriety after she ditched her Belgian prince husband to elope with a Gypsy musician. But Toulouse-Lautrec’s depiction of Ward is not for the sake of merely being shocking — it’s for the color and drama that comes with the most heightened of human drama. 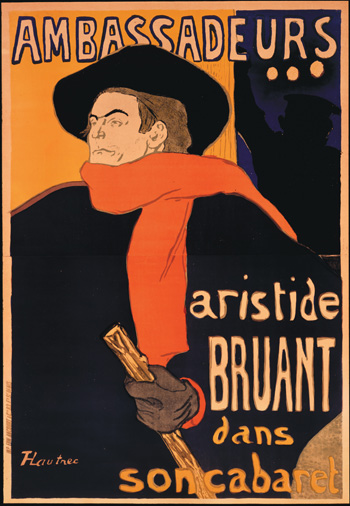 The 1892 lithograph “Ambassadeurs, Aristide Bruant” was one of the few posters Toulouse-Lautrec created that centered on a man.

Meanwhile, in “Divan Japonais,” dancer Jane Avril is the spectator, while the singer Yvette Guilbert, who Toulouse-Lautrec repeatedly captured in exaggerated images seen earlier in the show, appears on stage. At this point in the show, it feels as if you know the characters that populated Toulouse-Lautrec’s world.

There’s also a treat for visitors who find themselves enthralled by the brilliant blue poster of “May Milton.” After touring the exhibition, you can pop into a nearby room in the museum’s regular collection to see that Pablo Picasso included the dramatic print in the background of his painting “The Blue Room.”

While women are unquestionably the stars of the show and Toulouse-Lautrec’s world, “Ambassadeurs, Aristide Bruant” offers an example of a striking image featuring a man at its center. The print is done in stark color blocks, and unlike much of Toulouse-Lautrec’s work, it is not about movement, but immovability.

That’s fitting, given the print’s history. Bruant, a cabaret singer, had his friend Toulouse-Lautrec design the poster, but the director of the Ambassadeurs venue did not appreciate the style. Bruant stubbornly vowed not to perform unless the poster was put on display, and so it went up both outside and inside the theater.

This mesmerizing exhibition — which also includes additional works by Toulouse-Lautrec’s contemporaries — channels a magnetic time in history through its most iconic chronicler. Author Charles Hiatt wrote in 1895 that Toulouse-Lautrec’s posters “are at once realistic and grotesque,” and that duality means they still burst with life today.