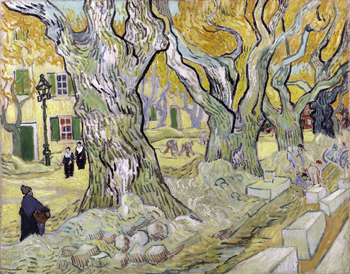 Vincent van Gogh often painted more than one version of a subject, a practice he called repetitions, as seen in works such as, from clockwise top, “The Road Menders.”

Vincent van Gogh was one of those people who had a penchant for creating more than one version of a subject, a practice he called “repetitions.” But what about those masterpieces stricken with rough, unbridled, emotional strokes for which the post-impressionist painter was so renowned? Oftentimes they were actually the result of a calculated, methodical process that helped van Gogh become a highly prolific artist known for his intensity, technical acumen and sheer speed during his brief 10-year career.

Aptly titled “Van Gogh Repetitions,” the latest exhibition at the Phillips Collection examines the Dutch painter’s artistic process by displaying variations of the same subject, often side by side. With more than 30 paintings and works on paper, the exhibition — the first in the gallery’s history to focus on van Gogh — reunites several versions of his works that have been dispersed all over the world.

Windmills, weavers, landscapes, rooms, magazine covers, friends and their families — it seems like none of van Gogh’s subjects got by without his constant artistic tweaking. 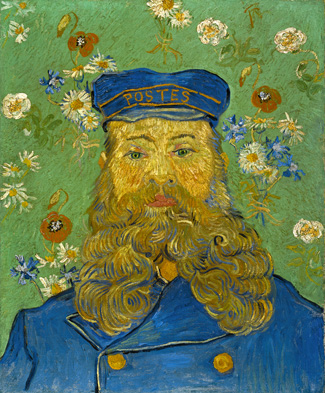 “The Postman Joseph Roulin,” is are among 30 pieces on display in “Van Gogh Repetitions.”

But the most notable of these subjects is perhaps the Roulin family. Van Gogh was reportedly very fond of the clan, who were among his few friends during his time in Arles in the south of France, where his productivity flourished. The Roulins welcomed van Gogh to their home and accommodated his requests to become the subjects of his portraits. He painted several versions of Joseph and Augustine and their young children, revealing both his deep admiration and deft skill in portraying them as his ideal family.

Van Gogh especially honed in on his good friend and drinking companion Joseph Roulin, who attended to the artist at a local psychiatric hospital in the aftermath of his notorious ear-cutting incident. Fascinated by the patriarch’s strong physical features, which he described as more Russian than French, van Gogh created several colorful variations of the full-bearded family man decked in his postman office uniform and cap. (More than a decade ago, the Museum of Modern Art in New York also paid homage to one of the artist’s favorite subjects with the exhibition “Van Gogh’s Postman: The Portraits of Joseph Roulin.”

Matriarch Augustine Roulin, van Gogh’s epitome of motherhood, is also a leading figure in the exhibit at the Phillips Collection, which features her in various repetitions, along with two sets of varying portraits of her children Marcelle and Camille. The portraits are executed in vivid colors, reflecting his fondness for the family and each member’s unique personas.

Another prominent painting in the exhibition is a Phillips Collection piece that started it all, “The Road Menders,” which museum founder Duncan Phillips praised as “among the best” of van Gogh’s masterworks. A second version of the same subject, “The Large Plane Trees,” was brought over from the Cleveland Museum of Art to be reunited with its Phillips counterpart. The two almost mirror-like pieces depict a street underneath immense trees in Saint-Rémy, France, where van Gogh admitted himself to an asylum.

As the museum’s source of inspiration for “Van Gogh Repetitions,” the pair of paintings, both composed in 1889, is a fitting introduction to the exhibition, while the rest of the works are organized in chronological order.

A highly prolific artist during his 10-year career, van Gogh produced 864 paintings and almost 1,200 drawings. His work stopped after a gunshot killed the painter at age 37. He sold only one painting during his lifetime, but he has since gone down in the annals of history as a brilliant, if emotionally troubled, genius.

Now the Phillips is revealing a lesser-known aspect of van Gogh’s personality that shines a new light on his iconic art. The show also marks the first van Gogh exhibit in D.C. in 15 years. And the city has certainly taken a strong liking to this new side of the painter. “Van Gogh Repetitions,” which requires visitors to book tickets in advance, drew at least 22,000 reservations — not including gallery members who don’t need to reserve — since it opened in mid-October. Some might even be repeat visits.

Kat Lucero is a contributing writer for The Washington Diplomat.