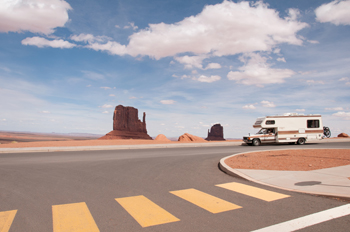 Last year, Spanish photojournalist Janire Najera took a road trip in a 1984 RV across the American Southwest to follow the Old Spanish Trail that connected New Mexico settlements with California and interview the area’s Spanish descendants.

In 2014, Spanish photojournalist Janire Najera, along with her assistant Matt Wright, took a road trip back in time across the American Southwest to explore the Old Spanish Trail, a historical trade route that connected New Mexico settlements to Los Angeles and other parts of California. The two documented their experience in “Moving Forward, Looking Back: Journeys Across the Old Spanish Trail,” a project that combines photography, video and sound and is now on display at the Spanish Embassy’s cultural center off 16th Street, NW.

“Hopefully … this would make people more curious to explore the arduous route that connected New Mexico with California in the 1800s,” Najera said.

According to the photojournalist, who studied in Madrid and Wales, the trail was mainly conceived as a trade route used for business and commerce — a 1,200-mile trek that cut through mountains, deserts and canyons. “I hope with this project people also get an idea of how it changed the lives of some people that decided to settle in a different state and start all over again,” Najera said. 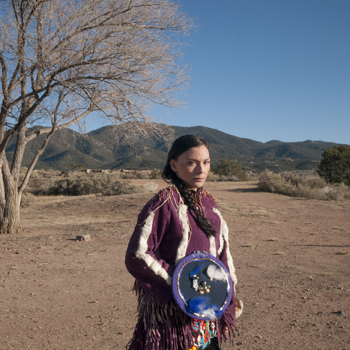 Najera and her assistant followed in the footsteps of Antonio Armijo, a Mexican explorer and merchant who was the first to traverse the Old Spanish Trail. Najera and Wright’s journey combined the past and present, capturing both the vast, sparse, imposing landscape that Armijo encountered, as well as the urban sprawl, freeways, farmland and other trappings of modern life that now punctuate the landscape.

Throughout their road trip, Najera traveled in a 1984 RV that morphed into a portable studio, home and meeting place for the Spanish descendants she interviewed for her piece. These descendants spoke to Najera about how the traditions of the first settlers merged with local cultures and how this Spanish heritage continues to influence today’s cities and pueblos.

Najera — who was born in the Basque Country, studied in Madrid and now lives in Wales — belongs to a generation whose roots are scattered, and she said it’s hard for her to identify with one particular place. Her other documentary work highlights communities that have been displaced by social and economic change.

Her journey throughout Colorado, Arizona, Utah, Nevada, New Mexico and California led her to reflect on the concept of roots. “I asked myself questions about identity and about what it means to be here or from there,” Najera said. “Working on this project has allowed me to meet with many people that have a strong interest in knowing more about their family history and who feel proud about their connections to Spain.” 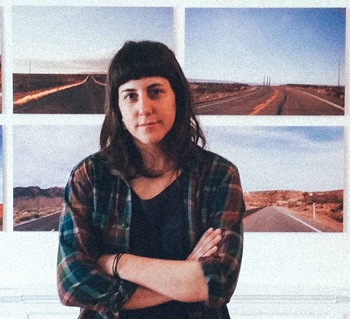 Each portrait in the exhibit includes taped conversations between Najera and the subject, adding a deeper dimension to the people we see in her striking photographs. Najera said that by using different layers of interaction, the work becomes more accessible. “I thought it was important to include the oral histories recorded with the Spanish descendants that I met to allow them to tell the visitors their own story, with their own voices,” she said.

If Najera were to do the project over again, she said she would’ve budgeted more time on the road because it was often hard for her to drive many miles while preparing the logistics to meet and photograph people and conduct interviews as well. 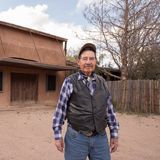 Upcoming projects include preparing the exhibition to tour other U.S. cities and, hopefully, at some point Spain. Najera is also working on a new photo book called “The Black Hole,” a project produced in New Mexico. Like the Old Spanish Trail exhibit, “The Black Hole” is premised on an interesting duality: It offers an iconic portrait of Middle America, with its manicured lawns and picket fences, while exploring the nuclear waste dumps and military testing sites that lie behind the perfect façade.

Najera’s work on “Moving Forward, Looking Back” also prompted self-reflection on two seemingly opposing concepts — the past and present — and how the two coexist. “It has facilitated me to rethink why sometimes looking back, it helps us to understand who we really are,” she said.

Moving Forward, Looking Back: Journeys Across the Old Spanish Trail