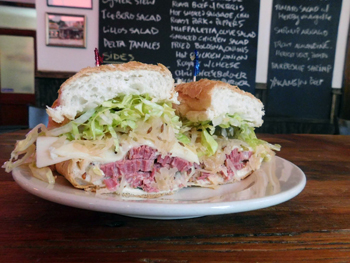 Washington’s once-predictable dining scene has become a cutting-edge culinary laboratory, as bold, creative young chefs and restaurateurs adopt a range of dining trends from the use of hyper-local ingredients to artisanal butchery, offbeat ice creams and more.

Naturally, the city has also embraced one of the hottest dining concepts in recent years: the pop-up restaurant. When it comes to pop-ups, the rules are that there aren’t many rules.


Originally started as supper clubs back in the 1960s, pop-up restaurants have seen a resurgence across the U.S. in the past few years. Just as their name implies, pop-ups materialize in unexpected places — established restaurants, warehouses, private homes — for a limited time.

In Washington, these temporary restaurants tend to serve as trial runs for chefs and investors to determine if their concept will work in a more permanent setting. They can also provide an opportunity for chefs, such as Washington uber-chefs José Andrés and Mike Isabella, to indulge a whim and go outside their comfort zones.

Pop-ups are fun and inventive, and they can give diners a chance to taste the talents of some of the city’s top chefs for prices that are lower than those in permanent spots. But they also can have downsides, including little to no ambience, spotty and uninformed service and dishes that by their very nature aren’t quite ready for primetime.

We recently tried two pop-ups in the District: Tchoup’s Market, a homey spot in a previous Thai pop-up space known as Alfie’s in Park View (near Columbia Heights) that serves authentic Cajun food, and the French Exit pop-up at Big Chief, a hip, industrial-feeling bar in the up-and-coming Ivy City neighborhood off New York Avenue, NE.

At Tchoup’s (www.tchoupsmarket.com), Alex McCoy — one of the city’s most innovative and celebrated chefs — is currently paying homage to his hometown of New Orleans, a legendary culinary landmark in the United States. Tchoup’s 40-seat dining room takes reservations, but walk-ins are welcome. When we visited on a Monday night, the cozy, laid-back space was buzzing. The 14-seat bar was filled with happy, chatty young people having dinner as a television overhead flickered with Monday Night Football, with the sound thankfully turned off. Most tables were full but a couple of them remained open. Bob Marley sang a soft serenade on the restaurant’s sound system. 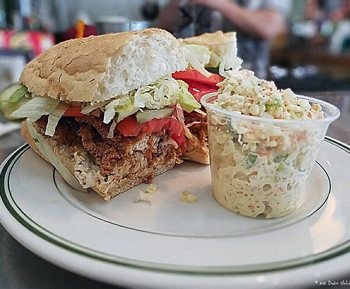 Tchoup’s — short for Tchoupitoulas Street in New Orleans — serves a variety of Cajun fare, from gumbo and muffulettas to red beans and rice and po’ boy sandwiches. McCoy also mixes it up fusion-style sometimes, as evidenced by the andouille sausage carbonara he whipped up on a whim in early November. But po’ boys are the main attraction here.

If you’re not familiar, po’ boys are a staple of Louisiana cuisine. The traditional versions of the sandwich are served either hot or cold and include fried shrimp and oysters. Soft-shell crab, catfish, crawfish, Louisiana hot sausage, fried chicken breast, roast beef and French fries are other common variations. The last two are served with gravy. Tchoup’s does them all.

Ask any po’ boy aficionado and they’ll tell you that the bread — typically a big, crusty French baguette sliced in half — is as important as what’s inside. That’s why McCoy flies his bread in daily from the renowned Leidenheimer Baking Co. in New Orleans. That may also be why these meat and bread specialties average a hefty $16 to $18. 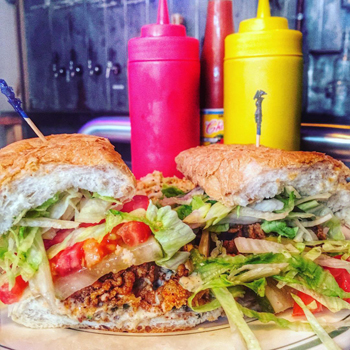 That might sound like an expensive sandwich, but trust us when we say it’s worth it. We went classic and tried the shrimp, oyster and catfish po’ boys. All three were generously apportioned and piping hot, but we got the sandwiches “dressed” with lettuce and tomato, which helped cool things off a bit. Both the oyster and shrimp po’ boys were outstanding.  The bread was crusty and fresh, and both the shrimp and oysters were plentiful and perfectly battered. Each bite held an initial crunch into the fried batter, followed by the soft and flavorful seafood inside. The fried catfish version was fine, but nothing to rave about. The fish tasted a bit, well, fishy and reminded us of the old adage to be careful what you wish for. But the meat was well-prepared. A tangy remoulade dressing gave all three po’ boys a nice, sharp contrast, while a few splashes of Crystal Louisiana hot sauce added a piquant finish. Each sandwich comes with a side of almost-too-sweet but pleasantly crunchy and flavorful coleslaw.

We also tried a salad and a bowl of red beans and rice, another Louisiana staple. The salad was homey and tasty with plenty of crisp iceberg lettuce and long, thick slices of fresh carrots. The house-made green goddess dressing was creamy and gave the vegetables a nice zing.

The beans and rice were both perfectly cooked, with the rice fluffy and granular and the small red beans (not the typically larger red variety you’ll often find with this dish) soft but not mushy. The legumes held their texture well.

While the meal was good, service was iffy. That’s probably the result of understaffing on this particular night instead of the server’s ambivalence, but everyone knows it’s annoying to have to ask for things twice and wait more than 10 minutes for the check, so it’s worth noting. 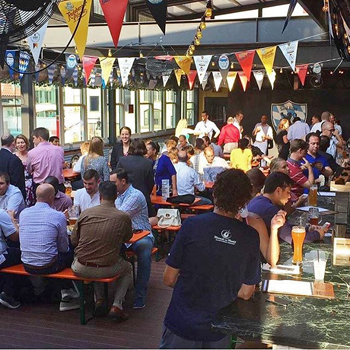 But overall, if you’re a fan of Cajun cooking, we’d put Tchoup’s in the top tier of D.C. restaurants that do that cuisine. Veteran standout Acadiana does an excellent version of Cajun food in a fine-dining atmosphere, but if you want to dress down and relax over an Abita beer and home-style cooking, Tchoup’s is the spot to do it — at least while it lasts. McCoy said he expects to keep the Cajun kitchen open for another two to three months.

Meanwhile, chef Matt Baker, another chef on the rise in our hyper-competitive restaurant landscape, is planning to open Gravitas, a fine-dining establishment in the Ivy City neighborhood, after the New Year. In the meantime, he’s been busy elevating the everyday sandwich at pop-ups around town. He’s cleverly named his temporary pop-up French Exit, similar to the “Irish goodbye,” which means leaving a party or gathering without notifying anyone or saying your farewells.


Flatly stated, Baker’s sandwiches are some of the best we’ve had in recent memory. They also aren’t cheap at $12 to $14 a pop, but they’re not ridiculously priced and you definitely get what you pay for. We caught up with Baker at Big Chief, the industrial-size bar and music venue in Ivy City that housed French Exit. In mid-November, he’d moved his pop-up to Sauf Haus Biergarten on 18th Street, NW. You’ll want to Google “French Exit” and “Matt Baker” to determine where he’s landed next by the time this article is published.


Wherever the ambitious and inventive chef lands, it’s worth seeking these sandwiches out. Part of the fun was watching Baker and his “sous chefs” cooking these fancy sandwiches up on electric skillets next to the bar.

We tried the fried chicken with pimento cheese, green goddess aioli, pickles and lettuce on a brioche bun, and it was fantastic. The chicken was plump and perfectly cooked — not a dry bite in the entire thing. The pimento cheese and green goddess aioli combined to create a sweet and tangy effect that had us eagerly anticipating the next bite. The roll was soft and fresh. This concoction didn’t last long at our table. 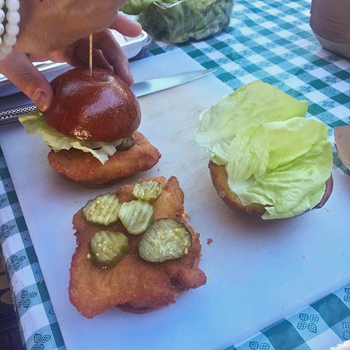 But the braised short rib grilled cheese sandwich was somehow even better. The toasted ciabatta bread was pleasantly crunchy, but yielded to some of the softest, gooiest deliciousness we’ve ever experienced between two pieces of baked yeast and flour. The beef was slightly smoky and incredibly tender, while red onion marmalade and white cheddar cheese gave the dish a surprising sharp and sweet complexity. This is sandwich-making as high art.


You must also try the kettle-fried potato chips. Even at $4, they’re darn near perfect. Crispy without being dry and served with a light dusting of sea salt, we almost opted for another order but somehow restrained ourselves.

There wasn’t much in the way of ambience at Big Chief, a cavernous bar that was nearly empty when we went save for some employees nodding their heads to the underground hip hop pumping at reasonable levels throughout the space. But as we mentioned, ambience isn’t the point when it comes to pop-ups.

These restaurants aren’t for fussy or pretentious diners, but for those willing to take a chance, they provide a great way to sample the next trends in D.C. dining.

Michael Coleman (@michaelcoleman) is the dining reviewer for The Washington Diplomat