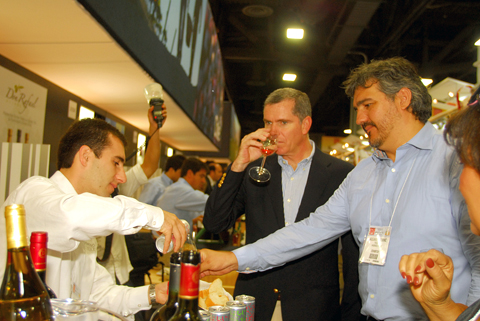 Mention Chilean exports to the average American, and the three that invariably come to mind — if anything comes to mind at all — are fruit, wine and salmon.

But Chile’s producing a lot more than that these days.

That message came through loud and clear at the Summer Fancy Food Show 2012, held June 17 to 19 at the Walter E. Washington Convention Center. The large Chilean pavilion — one of dozens of country-specific exhibits at the sprawling annual trade show — featured not only premium wines, but also gourmet cheese, dried prunes and extra-virgin olive oil.

The pavilion was inaugurated by Chile’s new envoy to the United States, Felipe Bulnes, and by Ann Daw, president of the National Association for the Specialty Food Trade (NASFT). The three-day event attracted 24,000 visitors and featured more than 180,000 products from 80 nations.

“As ambassador, I can say that besides the products themselves, it’s a way to show who we are and how we taste,” Bulnes told the Diplomatic Pouch. “Chile has a worldwide reputation as a quality producer of fresh fruits and now we are building on that reputation.”

Bulnes, a lawyer by profession, took over as ambassador in April from his predecessor, Arturo Fermandois. From all accounts, the new assignment in Washington appears to be considerably less stressful than his last job; as minister of education, Bulnes had to deal every day with violent anti-government protests by university students.

As Bulnes toured the Chilean pavilion and chatted with representatives of the 14 companies that had booths there, he was accompanied by half a dozen top officials of ProChile — the government export promotion agency with offices in Washington, New York, Los Angeles, Miami and Chicago.

“What makes me proud is that every time Chile is mentioned, the first comment I get is that Chile is known for being an extremely serious country with solid institutions and a clear respect for the rule of law,” the ambassador said. “We have a brand which is related to what we are as a people and as a country.”

The NASFT event marks the ninth year Chile has participated, and the second year it’s been held in Washington.

Chile, which racked up nearly $81 billion in exports last year, has long been considered the most successful economy in Latin America. In 2011, its GDP grew by 6.3 percent, with expected growth of 4.3 percent this year.

The United States, Chile’s third-largest customer after China and the European Union, bought $9 billion worth of Chilean products in 2011. The two countries have a free trade agreement that’s been in effect since 2004. 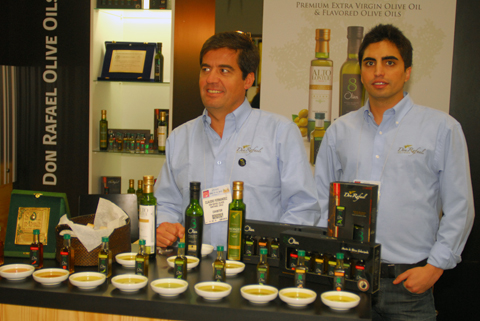 Grapes, berries and stone fruit alone accounted for nearly $4 billion worth of Chilean exports to the United States last year.

“We are producing extra-virgin olive oil which is unique,” said the ambassador. “Look at the reaction of people who try it. They can sense at first sip that they’re tasting one of the best olive oils in the world. Ten years from now, this could be as important as our wine industry.”

Chile’s wineries extend some 1,200 kilometers from north to south and benefit from both a Mediterranean climate and a vast range of disease-free soils.

“We have a lot of competition, but on the other hand, we are trying to build on the idea that we’re more than just a good buy,” said Bulnes, noting that for years, people bought Chilean wines because they were delicious and cheap. These days, he said, “We have wonderful wines that could compete with French wines and the best California wine. Chile is getting more and more medals, because our wines are of high quality by themselves.”

According to ProChile, 16.9 million people around the world now drink a glass of Chilean wine daily. The country now has a 3.7 percent share of the global wine market, and leading Chilean exporters like Concha y Toro hope the industry will reach $3 billion worth of exports by 2020.