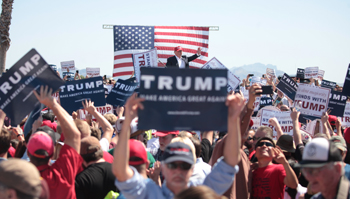 What are educators at top-notch political science schools in the nation’s capital telling their students about one of the most divisive U.S. presidential elections in history?

Donald Trump waves to supporters at a campaign rally in Fountain Hills, Ariz.

“There is something really different and crazy going on every day in the political arena and there’s no way to predict it, and people continue to watch it because it’s so unpredictable and it is so crazy,” Steven Billet, director of the legislative affairs master’s degree program at George Washington University, told The Washington Diplomat. “It’s a form of entertainment. I mean, you can’t make this stuff up.”

Asking “what stuff?” almost seems silly for anyone with a smartphone, social media account or internet connection. Democrat Hillary Clinton continues to dodge questions about her trustworthiness amid a litany of political scandals, while her opponent, Republican Donald Trump has ascended to the top of the GOP ticket through a seemingly reckless use of anti-establishment rhetoric and showman ability to make headlines that would have likely doomed any presidential hopeful throughout history.

“One of the things I impress on my students is that the themes we see here did not emerge from this campaign, but from other issues in the sorting of ideological radicalism mostly on the political right,” he explained. “We saw attempts by former House Speaker John Boehner (R-Ohio) to discipline the Tea Party movement and the Freedom Caucus, and the result was that they threw him out of office. So there’s a vocal, empowered minority, especially on the right, that is able to defy congressional leadership and party leadership. And what we see in primary and general elections is that these anti-establishment candidates end up running and owning their party.”

“I don’t attack or criticize Trump in class, but what I try to do is make students understand why things have played out the way they have so far,” he said. “But Trump is so extreme and erratic and crazy and the language he uses is so incendiary. There is something really unstable about the guy.”

Dallek said that while Clinton’s image has been tarnished by the 2012 attack on the U.S. compound in Benghazi, Libya, and the use of a private email server during her tenure as secretary of state, she may still win by a wide margin.

“The Republican party has nominated a conspiracy theory-loving, misogynistic, bigoted candidate, who if he loses substantially, people will say he ran one of the worst major party general campaigns since McGovern,” Dallek said, referring to the 1972 Democratic presidential nominee, George McGovern. “If she wins by six or seven points, like Obama in 2008, it speaks to the argument that U.S. Sen. Lindsey Graham (D-S.C.) made that Trump is an Electoral College disaster.”

Charles A. Stevenson spent over 20 years working in the U.S. Senate and for the secretary of state’s policy planning staff, and now teaches courses in American foreign policy at the School of Advanced International Studies at Johns Hopkins University. Foreign Policy Magazine recently ranked the school second in the nation for international studies.

“I try my best to not let my political views show. My students are voters, too. They have to make up their own minds,” Stevenson told us. “Trump is such an unconventional candidate. He doesn’t have a ground game. He doesn’t have an advertising program. He doesn’t have a circle of advisers that he can see and the media can talk to. He is so unusual, so atypical just on those grounds. Then to have him be a free-associating speaker who riffs, it’s hard to tell what’s going to come from his lips.” 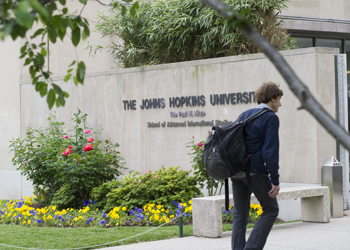 The School of Advanced International Studies at Johns Hopkins University is one of the top-rated foreign policy schools in the nation.

“I fear that this tone is only worsened in the Trump campaign, and that it will make it hard for the winner to escape this sense of illegitimacy by the opposition.,” he said. “The key issue is that if Clinton wins, which it is looking increasingly like it will happen, will she have a Republican or a Democratic Congress?”

Regardless, Billet doubts the country is going back to more civility in politics

“Assuming that Donald Trump is some sort of aberration that will go away after this election is a foolish notion,” he said. “Now we have people who are able to say outrageous things, they get away with it and get all this free airtime regardless of whether they’re right or wrong. We are not going to go back to a more civil level of conduct with our politics. This election campaign is simply an extension of what we have been going through the last several years. It’s not that odd. It’s an extension of the instability we’ve seen in the Congress, and that is a manifestation of further polarization in the American public. It’s just a matter of time before we see who the next Donald Trump will be.”

James Cullum (@JamesCullum2) is a contributing writer and photographer for The Washington Diplomat.