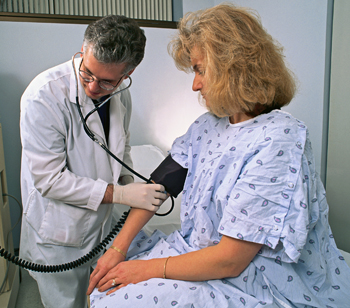 Engaging Americans at high risk for heart disease in aggressive efforts to lower their blood pressure could save more than 100,000 lives a year, a new analysis indicates.

Current guidelines recommend a systolic pressure — the top number in a blood pressure reading — of below 140 mm Hg. But a 2015 study from the U.S. National Institutes of Health suggested more lives could be saved if the goal was less than 120 mm Hg.

The NIH trial known as SPRINT included adults ages 50 and older with systolic readings of 130 to 180 mm Hg and at high risk of heart disease (but not diabetes or stroke).

What if all U.S. adults with a high risk for heart disease were treated as aggressively? That’s the question that Dr. Holly Kramer, an associate professor of public health sciences and medicine at Loyola Medical Center in Maywood, Ill., and her team sought to answer in the new study.

“I think that people have generally become comfortable with the blood pressure targets that we currently have,” Kramer noted.

Based on an annual death rate of 2.2 percent for that population, they predicted that 107,000 deaths could be prevented each year through intensive systolic blood pressure lowering.

Of the 18 million, close to 9 million had systolic readings at the higher end of the spectrum — 145 mm Hg or greater. And their annual death rate was 2.5 percent. But with intensive control, researchers projected that 61,000 deaths would be avoided each year.

If the results of the NIH trial are correct, “many, many lives would be saved,” said Steven Houser, president of the American Heart Association (AHA). “It’s an interesting prediction.” (Houser is senior associate dean of research at Temple University School of Medicine in Philadelphia.)

But how low should the bar be set? Experts are wrestling with that question.

A task force of the AHA and American College of Cardiology (ACC) is expected to issue guidance sometime during the second quarter of 2017.

Dr. Carl Pepine is a past president of the ACC and a professor of medicine at the University of Florida.

The intent, he said, was to minimize patients’ “white coat,” or stress response, to having their blood pressure taken in a doctor’s office.

“There’s no question that lower is better, but now the actual target level is now open to question,” he said.

There are also potential side effects to lowering blood pressure too far. It can cause dizziness and, potentially, falls and broken bones, particularly in an older population.

But that was not the case in the NIH study, Pepine noted. Patients had frequent visits with clinicians to tweak their medication regimens.

“At the present time, I don’t think there’s a strong compelling reason not to shoot for a lower blood pressure target, even in an older patient, knowing this dramatic benefit that can result,” he added.

The new findings were presented Sept. 15 at an AHA meeting on high blood pressure, in Orlando, Fla. Research presented at scientific meetings is considered preliminary until published in a peer-reviewed journal.