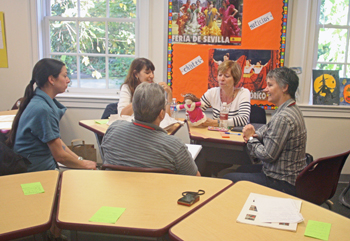 Education is a divisive issue in the District, where educational opportunities are unevenly distributed by race and class. Politicized topics like teacher tenure, school closings, charters and mandatory testing tend to dominate public discourse, while conversations about students and how they learn take a backseat.

But in the background of those higher-profile debates, another conversation is happening among teachers in D.C., as a critical mass is steadily building around a body of research from Harvard University’s Graduate School of Education called Project Zero, which dissects the learning (and teaching) process.

Teachers at the Washington International School, which follows the International Baccalaureate (IB) curriculum, have been using Project Zero concepts in the classroom for the past decade.

In 1967, researchers began to study ways to make people better thinkers. The movement was spurred by philosopher Nelson Goodman, who wanted to study and improve education through the arts, believing that arts learning should be examined as a serious cognitive activity, but that “zero” knowledge had been firmly established about the field; hence, the project’s name.

Today, Project Zero has built on years of research to help create communities of reflective, independent learners; to enhance understanding among different disciplines; and to promote critical and creative thinking. Its work includes research into the nature of intelligence, understanding, thinking, creativity, ethics and other essential aspects of human learning. This has evolved into a set of tools that teachers describe as “transformative.”

Teachers at the Washington International School, which follows the International Baccalaureate (IB) curriculum, have been using Project Zero concepts in the classroom for the past decade. “[Project Zero] has had a major effect on the culture of our school,” Reese said.

Project Zero can inform a school’s curriculum, but it is not a curriculum per se. The IB curriculum, for example, provides topic ideas and resources for teachers but doesn’t dictate the pedagogical aspect of the coursework. Project Zero concepts can help teachers identify how to deliver curriculum content to their students in a way that is meaningful to them.

In the traditional classroom, a teacher delivers information to students who are passive recipients. Students are then called on to give back that information in a formal assessment. A Project Zero teacher facilitates learning by allowing students to develop their own interpretations with his or her guidance.

The goal is to teach thinking skills that improve students’ reasoning, problem-solving skills and creativity, in part by having them question old ways of thinking and be actively engaged in the learning process. David Perkins of the Harvard Graduate School of Education told the Harvard Gazette that his researchers discovered that the biggest problem that stood in the way of thinking was not IQ but alertness. “Things just pass people by,” he said. “They didn’t notice the little anomalies. They didn’t notice that the other side of the case was missing.” 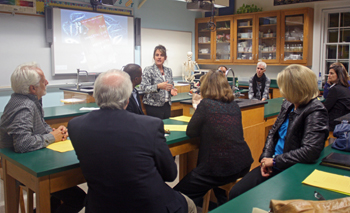 Teachers at the Washington International School, which follows the International Baccalaureate (IB) curriculum, have been using Project Zero concepts in the classroom for the past decade.

Last summer, Reese, who coordinates professional development for Washington International School, was one of 40 educators from D.C. schools to attend Harvard’s Project Zero summer institute in Boston. He tapped into the excitement among teachers attending the professional development program and started a group called “DC-PZ.” The teachers, who include Project Zero veterans and recent converts, is now 275 strong, with teachers from all eight wards in the city as well as educators from major museums like the National Gallery of Art.

While enthusiasm for Project Zero was growing among D.C. teachers, an effort was under way at Washington International School to host a Project Zero summer institute here in the nation’s capital. Last spring, the school was awarded a coveted Edward E. Ford Foundation leadership grant to fund the first annual Washington International School Summer Institute for Teachers in 2014.

In 2010, Washington International School, in partnership with the National Gallery of Art, hosted the first Project Zero conference outside of Boston with a previous grant from the Edward E. Ford Foundation. A second matching grant allowed the school to establish a consultant-in-residency program for the 2010-11 academic year featuring Project Zero researchers Veronica Boix Mansilla and Ron Ritchhart.

The Washington International School Summer Institute for Teachers, or WISSIT, aims to make Project Zero a permanent presence in D.C., and ultimately a collaborative project sustained by the school in partnership with other private, public and parochial schools.

“A lot of [Project Zero practitioners in D.C.] are from public charter and traditional public schools, some of which are really struggling with kids who are coming from incredibly disadvantaged circumstances,” Reese said. “We really want this to be something that can translate into any kind of setting. We’ve seen it happen all around the world with Project Zero’s work, but we want to see it happen here in D.C.,” he said, noting that there’s “real enthusiasm” for these ideas from teachers in the city.

Unlike Harvard’s program in Boston, WISSIT is open only to teachers from the District and is offered at a fraction of the cost of Harvard’s summer institute (Harvard tuition is $2,500 per teacher; WISSIT will be about $500). The grant also covers scholarships for teachers who can’t afford the tuition.

The idea, said Reese, who will be the director of WISSIT, “is to bring together traditional public, public charter, parochial and independent school teachers together in one place to really explore [Project Zero] ideas pre-K through 12 and then to continue the conversation after the institute ends.”

On that note, WISSIT will not be a one-time experience like the typical professional development conference, which may impart exciting ideas but offers little follow-up. After the weeklong summer program ends, the work of the institute will continue through workshops and professional development seminars. To encourage Project Zero ideas to take hold and flourish in District schools, Washington International School will also provide a mechanism for teachers to collaborate and share classroom experiences online. The idea is to build a network of Project Zero practitioners around the city.

“There’s lots of stigma about D.C. schools,” said Kristen Kullberg, a middle school language arts teacher at Sacred Heart, a bilingual Catholic school in D.C. “There has been such a focus on the politics of education in D.C.,” she said. “The whole education system has become a power struggle. It hasn’t been about students. It hasn’t been about the classroom.” 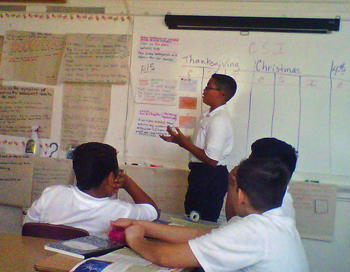 WISSIT is an opportunity to recalibrate, she said, and a chance for teachers who are on the “cutting edge” of education to prove that “D.C. education isn’t just about politics; it’s actually extraordinarily child-focused and thinking-focused.”

WISSIT will focus on building a culture of thinking in schools and teaching global competence, two distinct but related Project Zero concepts that are particularly relevant in an international city like Washington.

“You can look at educators as technicians who teach a script or you can look at them as professionals who actually design the script,” said Barbara Smith, the principal at William E. Doar Jr. Public Charter School for the Performing Arts. “If we want a group of young people who are going to be designing the future of the world that they live in, then we need to have models in front of them that are doing the same thing.”

Two Harvard Project Zero researchers, Veronica Boix Mansilla and Ron Ritchhart, will lead the summer program. Boix Mansilla chairs the Future of Learning Institute at the Harvard Graduate School of Education, which studies the changing world of education in an increasingly interconnected global society. Ritchhart will lead the portion of the program focused on building a culture of thinking; Washington International School gives Ritchhart’s book, “Making Thinking Visible: How to Promote Engagement, Understanding, and Independence for All Learners,” to all of its teachers.

“Making Thinking Visible” is a research-based approach to teaching thinking. It’s about “taking the focus off of student product and focusing more on the process,” said Kullberg, who was “amazed” when she discovered Project Zero three years ago, because “as teachers we hear only about test scores.”

Tension with ‘Teaching to Test’

In a world where mandatory student testing is a critical lifeline to school funding, teaching to the test and Project Zero may seem like mutually exclusive approaches, and one might assume that pressure to master mandatory testing could be a barrier to Project Zero ideas taking hold in D.C. schools.

It depends on how you approach it, says Smith. “You don’t want to stop short of moving into critical thinking and invention.”

“I think if a school is so focused on getting kids to do well on standardized test that they’re teaching to that test, they are missing out on getting kids access to relevance in education,” Reese said.

Project Zero doesn’t necessarily conflict with mandatory testing, Kullberg said, adding that it is just a different and better way for kids to access the material.

WISSIT represents a departure from typical public-private partnerships, which usually channel funds directly to students through scholarships, summer enrichment programs and the like. Rather, WISSIT invests in students by investing in teachers.

“We have enormous confidence in Washington International to execute and follow through,” said Robert Hallett, the recently retired executive director of the Edward E. Ford Foundation.

In 2008, the foundation established its leadership grant to fund transformational projects that respond to the question, “What is the public purpose of private education?” Only private schools are eligible for the funding, but the program must involve a public-private partnership.

Independent schools represent a small slice of education in America — only about 1 percent. The leadership grant encourages independent schools to think differently about how they use their resources. The public-private partnership is a mechanism for leveraging the resources of private schools — funding, intellectual capital, access to people and places — to reach teachers and students in the public school system, Hallett explained.

Wary of projecting a sort of noblesse oblige that, real or perceived, can accompany collaborative efforts between public and private institutions, Washington International School wants WISSIT to be a true partnership, says Reese. The project will be guided by an organizing committee composed of educators from different schools. Spots at the summer institute will be reserved for public and charter school participants, who sometimes have to go through longer processes to secure funding. While Washington International School is hosting the summer institute, it envisions organizing future Project Zero workshops hosted by other schools all over the city.