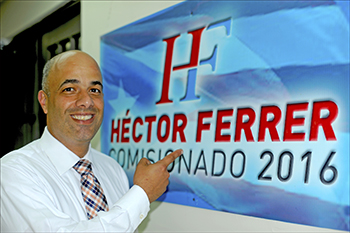 San Juan attorney Héctor Ferrer, 46, is running for Puerto Rico resident commissioner on the pro-commonwealth Popular Democratic Party (PPD) ticket. A member of the Puerto Rico House of Representatives for 12 years, he was House minority leader from 2005 to 2012 and is former president of the PPD. We recently interviewed Ferrer at PPD headquarters in Puerta de Tierra. Here are excerpts from our meeting:

Q: Why are you running for resident commissioner?

A: This is an unprecedented time in commonwealth history. As you know, Congress passed and President Obama signed into law PROMESA [the Puerto Rico Oversight, Management, and Economic Stability Act], which institutes a fiscal oversight board that not only works together with Puerto Rico’s executive and legislative branch but also has the power to overturn laws and budget decisions that the government of Puerto Rico approves.

This new oversight board is nominated by Republicans and Democrats, so whoever represents Puerto Rico in Congress will have an important role in complying with the fiscal plan we have to adopt in order to restructure the debt, carve out expenses in government and identify both local and federal ways of stimulating the economy.

The times require someone who knows how Congress and the government of Puerto Rico works — someone with the capacity to communicate to Congress the needs of Puerto Ricans and who understands there are different options regarding our status, someone who will respect the intentions of the Puerto Rican people. So the resident commissioner’s job now has an importance that goes beyond the basic responsibilities of finding solutions to problems like health, infrastructure and federal funding.

Q: How do you see the role of resident commissioner in Washington?

A: The resident commissioner has to be a kind of ambassador for Puerto Rico in D.C. — to sell Puerto Rico not only in tourism but in agriculture, manufacturing and medical services. He should be the representative of our economy.

Q: For years, your party has solidly stood behind Puerto Rico’s commonwealth status. Why are you now calling that into question?

A: It’s been overrun by PROMESA and the decisions of the Supreme Court, which declared unconstitutional our bankruptcy law that allowed Puerto Rico to establish its own bankruptcy code. In the 21st century, how can the most powerful country in the world — which declares itself the icon of democracy and liberty — treat the 3.5 million American citizens of Puerto Rico like a colony?

Q: What are the key differences between you and your principal opponent, Jenniffer González of the New Progressive Party?

A: We both come from the House of Representatives. She’s a former speaker, I am a former minority leader. But I believe that government is set up to help people in need. I believe in social programs and in Obamacare, that we can get parity of funds for Medicare and Medicaid, and that we don’t need to be a state to do it. She’s a Republican, so she believes the people of Puerto Rico should pay federal tax. I am against the Jones Act, she’s in favor of it. And I believe we can attain economic growth with incentives approved by Congress, such as amendments to the IRS tax code that allow foreign companies in Puerto Rico to repatriate their profits to Asia and Europe. If you change the code to classify them as domestic, they will keep the money here.

Q: How important in general are federal tax incentives for Puerto Rico?

A: I’ve been in meetings with many congressmen and senators. They say that what Congress did in 1996 [phasing out tax incentives for the island] was a mistake. We lost at least 100,000 good manufacturing jobs. We lost at least three banks where the profits of these corporations were deposited. We lost a big part of the economic core of Puerto Rico. Not only were these direct jobs, but 936 companies supplied other sectors — transportation, services, utilities. It was a big hit on the economy of Puerto Rico that we haven’t recovered from yet.

They thought the money would go back to the States, but it didn’t. It left to Singapore, Ireland and elsewhere. They destroyed an American economy and gave those jobs to foreign companies. So there’s an incentive to fix what was destroyed, to bring prosperity back to Puerto Rico. This is an incentive for the U.S. Treasury to get money it’s not getting right now.

A: The Jones Act forces us to pay more for products than other Americans pay, because they have to be shipped on U.S.-flagged vessels. You can bring products by land from New York to Florida, but not to Puerto Rico. So there are serious arguments for us to be exempted from the Jones Act, like the U.S. Virgin Islands. One of the things PROMESA requires is to identify federal laws that impede Puerto Rico’s growth. My opponent’s ideological vision and purpose goes ahead of the needs of the people of Puerto Rico. For her, it’s more important for the people to be a state and pay federal taxes and high U.S. merchant marine fees.

Q: What would you do to increase tourism’s sector of the Puerto Rican economy?

A: Tourism is doing well, but I think we can do better. Most tourists stay in the San Juan metro area. We haven’t done enough — neither the government nor the private sector — to expand tourism to other parts of the island. We’re 100 by 35 miles in Puerto Rico, and we have everything here except snow. Also, the government has to establish a plan to sell Puerto Rico not only to U.S. tourists but also to the whole world. We have concentrated our tourism on the United States while our neighbors — the Dominican Republic, Cuba and other Caribbean islands — have been targeting Europe and Asia.

Q: How do you see the U.S. presidential elections affecting Puerto Rico?

A: Our real unemployment rate is 20 to 25 percent. [Hillary] Clinton has already said on the Democratic platform that they will pair up federal funds for Medicare and Medicaid. This will help Puerto Rico if we have the same cap. We would receive around $5 to $6 billion if parity is established. Then we can liberate $1.2 billion of our budget that is right now allocated to the Health Department to cover insurance plans. Second, the Republicans would carve out Obamacare. Democrats won’t do that.