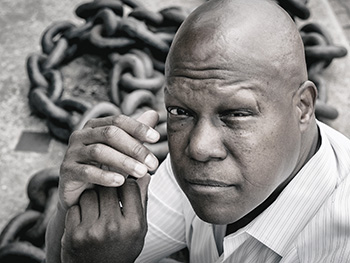 Tucked into the expanse of the Embassy of Canada is a small, thoughtful exhibition that showcases the stories of the descendants of African Americans who escaped slavery in the United States by fleeing north before the Civil War.

Czech photographer Yuri Dojc documented the descendants of the fugitive slaves who used the secret routes and safe houses of the famous Underground Railroad network to follow the “North star” to freedom in Canada.

“North is Freedom” is a photographic essay featuring two dozen portraits of descendants of some of the 30,000 fugitive slaves who used the secret routes and safe houses of the famous Underground Railroad network to follow the “North star” to Canada. Timed to coincide with the opening of the newest Smithsonian museum, the National Museum of African American History and Culture, “North is Freedom” offers direct, intimate images that remind viewers of the connections — geographic, familial, historical — between the neighboring countries.

Photographer Yuri Dojc, who fled his native Czechoslovakia in 1968 and then made his way to Canada, said his project highlights a very “human story” that connects Canada and the United States to this day.

“It’s a fascinating story of movement, of people, and it’s an important part of Canadian and American history. And it’s so under the radar; I don’t know if they even teach that in schools,” Dojc told The Washington Diplomat.

The large format portraits that occupy the small room on Pennsylvania Avenue are striking, simple images with an emphasis on the subject’s face. For those looking for more details about each person featured, a booklet is available so visitors can dig deeper into the various personal narratives on display.

The photographs, notable for Dojc’s use of the dye sublimation technique, which uses heat to print in order to achieve a picture with virtually no lines, are neither black and white nor fully color.

“The reason I used this is because I read the book ‘The Color of Water,’ and in the book the son, whose mother was white and father was black, asked his mother, ‘What color are we?’ And she said, ‘You are the color of water,'” Dojc recalled. “So I subdued the colors, and it gives the exhibition a character. It takes it away from ordinary. I want to make it so we are all the same — we are not black and white, we are not color. We are all somewhere between.”

From solo portraits to larger family shots, the pictures feel both privately revealing and particularly Canadian, with some focused on the beauty of the landscape or the unique history of places like Uncle Tom’s Cabin Historic Site in Ontario along with the descendants at the center of the photograph. It is a quiet, contemplative exhibition, giving those that stop by a short meditative break with few fellow sightseers likely to interrupt the visit.

The grandchildren, great-grandchildren and great great-grandchildren of once-enslaved African Americans who settled in Canada some 150 years ago are photographed beautifully and sensitively by Dojc, with their family histories listed below their names and in the booklet connected with the exhibition. 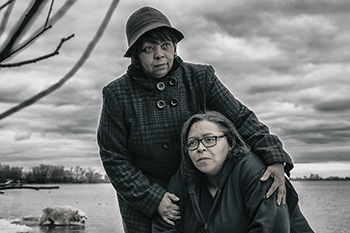 “To be included in this project is to finally pay homage to each of our ancestors. They may have had to follow the ‘North Star,’ but we can to the world, we are here, and we remain here,” descendant Susan Johnson-Washington said in the exhibition catalogue.

“During my early years, no one spoke of family history,” she said. “All older friends or relatives were referred to as aunt or uncle, and now that family has passed, the story has gone as well,” Morrison said in the booklet, which notes that she has spent much of her life working to preserve the black history of the Niagara region.

The title of the exhibition comes from a poem by George Elliott Clarke, the current Canadian Parliamentary Poet Laureate, and the room also features a quote by Martin Luther King Jr. “Deep in our history of struggle for freedom Canada was the north star,” King said in 1967, adding that, “The legendary underground railroad started in the south and ended in Canada. The freedom road links us together.”

For Dojc, the exhibition came together serendipitously when he was in D.C. last year, spurred on by driving past the National Museum of African American History as it was under construction and by encountering a monument to the Underground Railroad in Canada a month before.