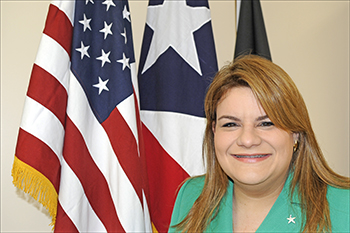 Jenniffer González, 40, is running for Puerto Rico resident commissioner on the pro-statehood New Progressive Party (PNP) ticket. A graduate of both the Inter-American University and the University of Puerto Rico, the San Juan attorney was vice chairman of the PNP since 2008 and now chairs the Republican Party of Puerto Rico. We recently interviewed González at her office in San Juan’s Capitol. Here are excerpts from our meeting:

Q: Why are you running for resident commissioner?

A: Puerto Rico’s people need a strong voice to our credibility — not only in Congress but also for creditors and bondholders. I’m a former speaker of the [Puerto Rican House of Representatives] so I have the whole picture of what’s going on. This government broke the law by ignoring the Puerto Rican Constitution regarding the processes of approving new laws and taxes, and by raising taxes on 95 occasions without making any kind of adjustment or reduction in the local budget.

Being the sole representative from the island without voting rights in Congress, we should use the resident commissioner’s office as an ambassador for economic development — not only with foreign embassies in Washington but also with programs and agencies at the federal level so we can help the island get out of its fiscal crisis.

Q: What makes you the best candidate for the job?

A: I became a legislator at 25, was the youngest legislator in Puerto Rico and at 32 became the youngest speaker of the House. There’s no other candidate for resident commissioner that has been putting out there ideas and specific proposals for economic development, to manage the health care cliff we’re going to face next year. I’m the only one who has a thick platform regarding what to do with Puerto Rico at the federal level.

Q: How important is Puerto Rico’s political status within the context of the island’s massive debt crisis and solutions for resolving it?

A: I support statehood for Puerto Rico, and I understand that Puerto Rico should be included in U.S. treaties with other countries…. We should also change local laws to make businesses more profitable. My role in Washington will be a political one but also an economic one, and I will be working closely with PROMESA [the Puerto Rico Oversight, Management, and Economic Stability Act].

Q: Thousands of Puerto Ricans have protested PROMESA, specifically provisions that essentially give it veto power over decisions made by local legislators. How do you respond to their concerns?

A: I was initially in favor of a federal board on the island. I have my concerns, but it’s already been enacted, so I will work closely to have that board taken out in five years. To do that, we should have credibility which establishes a rule of law.

Q: And that’s not the case now?

A: We don’t even have audited financial reports. This government failed to make them public for two years in a row. We don’t have any data. Even I, as minority leader, have to file suits against the government to see the budget and how they’re spending public money. There’s a lot of secrecy in the way the government deliberately chooses to seek bankruptcy without taking actions locally and without respecting the law.

Q: What about Chapter 9 bankruptcy protection for Puerto Rico?

A: We can’t use that tool if we don’t have the data. It’s a tool we can look at once we shrink the government and cut our expenses.

A: No. The real reason 936 left the island was because of the treaty Bill Clinton negotiated with NAFTA. It was not our government’s position to get rid of those companies. Personally, I’m looking into other options, such as a temporary 20-year or 25-year neutral status, so that even if we become a state, we maintain our current territorial tax situation. We are promoting alternatives that should be workable with the task force. We know that Congress is not going to approve a corporate welfare program like Section 936. That’s not even an option. But if we were part of the U.S. mainstream economic system, we would never have had this situation. We pay our Social Security and Medicare taxes but we don’t receive the same amount. There are a lot of discrepancies.

Q: What is the best way to stop the flow of Puerto Ricans to the U.S. mainland?

A: More than 200,000 people have left the island in the last three years; they’re moving mainly to Florida and Texas. All Puerto Ricans have U.S. passports. If we don’t fix the situation we’ve already got here, more people will leave.

Q: If Puerto Rico became a state, would it get to keep its own Olympic team?

A: It’s like Miss Universe. There are already precedents for countries which participate regardless of their status. It happened with Hong Kong. That will be a decision by the International Olympic Committee — and Puerto Rico had its own franchise before becoming a commonwealth in 1952.

Q: Pedro Pierluisi, Puerto Rico’s current resident commissioner, lost your party’s primary earlier this year and cannot run for re-election. How would you rate his performance?

A: He’s been doing a marvelous job, but without having a vote. He’s a Democrat in a Republican Congress. I’m a Republican, so that may change. All the polls show that [Republican House Speaker] Paul Ryan will stay as speaker. There’s a lot of issues we can move forward on.

Q: How do you see the U.S. presidential elections affecting Puerto Rico?

A: Both Hillary Clinton and Donald Trump are committed to resolving the island’s political status. The Republican platform provides for a federal plebiscite so the people can accept or reject Puerto Rico’s inclusion as a state of the union.