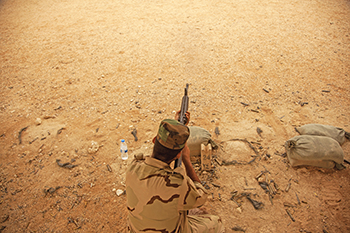 The United States has flooded Iraq and Afghanistan with billions of dollars worth of small arms since the terrorist attacks of Sept. 11, 2001, and has lost track of millions of them, according to a recently published report on 412 Department of Defense contracts by the London-based advocacy nonprofit Action on Armed Violence.

An Iraqi soldier with the 7th Iraqi Army Division fires an M16A2 service rifle during advanced marksmanship training at Al Asad Air Base in Iraq on Oct. 25, 2015.

People often associate U.S. military assistance with heavy hardware such as armored fighting vehicles, anti-tank weapons and attack helicopters. But small arms — pistols, assault rifles, machine guns and shotguns — can be just as lethal, if not more so. Action on Armed Violence estimates such small arms kill over half a million people each year — and that doesn’t even include conflict areas.

In war zones such as Iraq and Afghanistan, which are already awash in small arms, throwing more guns into the mix can fan the flames of sectarian and ethnic violence. Moreover, keeping track of such weapons in largely anarchic societies — and preventing them from falling into the wrong hands — is a monumental undertaking.

The Pentagon has not provided detailed numbers on its small arms exports to either war zones, so Action on Armed Violence (AOAV) spent nearly a year scouring Defense Department contracts and found that they totaled over $40 billion for guns and ammunition.

“We are not talking aircraft carriers here; $40 billion is a huge amount of issued contracts just for guns, attachments and ammo, even over 14 years of warfare,” Iain Overton, AOAV’s director of investigations, said.

“We conducted this review after a Freedom of Information request to the U.S. Department of Defense, asking for details on AK-47 sales to Iraq and Afghanistan, was returned completely redacted,” he explained in a press release. “We did not anticipate, though, finding so much money having been spent by the Department of Defense on small arms, ammunition and attachments.”

Overton added that such arms shipments to unstable states should be more properly tracked. “We also know the U.S. government has acknowledged they don’t know where many of these weapons now are.”

AOAV concluded that DoD spent over $2 billion on small arms in Iraq and Afghanistan — almost eight times more than what it publicly reported on foreign military assistance and contracts. That breaks down to over 1.45 million small arms sent to Iraq and Afghanistan between 2001 and 2015, including nearly 112,000 machine guns, 692,000 assault rifles and 266,000 pistols.

“We know by looking at other U.S. government records that at least 1,452,910 small arms have been sent to Iraq and Afghanistan in the last 14 years,” Overton said. “The DoD contract database appears to list as little as 3 percent of these.” 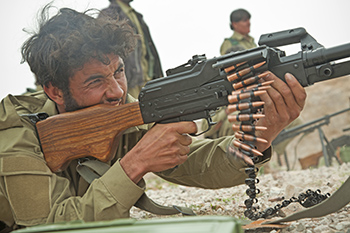 The implication is that missing weapons end up on the black market or in the hands of terrorists, thereby prolonging conflicts in these war-torn regions.

“It wouldn’t be possible to sell these weapons without over a decade of warfare,” William Hartung, an arms and security expert with the Center for International Policy, told The Washington Diplomat. “The Pentagon is not even audited, so they need to check their books and keep track of these weapons once they’ve left the country.”

The Pentagon did not refute the claims in the report and maintains that weapons were lost in the race to adequately supply arms to struggling Afghan and Iraqi military forces.

“Once we transfer a weapon over to a partner nation government, it is their responsibility to account for that weapon,” Mark Wright, a Department of Defense spokesman, told The Diplomat in an email. “The new governments of those nations started their existence already locked in a brutal fight with terrorists, former regime personnel and other hostile elements. Speed was essential in getting those nations’ security forces armed, equipped and trained to meet these extreme challenges. As a result, lapses in accountability of some of the weapons transferred occurred.”

But critics argue that the sheer scale of these “lapses” was inexcusable, particularly because counting weapons and recording their serial numbers is common practice in the U.S. military. As C.J. Chivers wrote in an Aug. 24 New York Times piece, “In one of many examples, a 2007 Government Accountability Office report found that 110,000 Kalashnikov assault rifles and 80,000 pistols bought by the United States for Iraq’s security forces could not be accounted for — more than one firearm for every member of the entire American military force in Iraq at any time during the war.”

Chivers argues that the Pentagon’s dismal record-keeping and monitoring of firearms point to a larger problem: The U.S. military embraced ambitious nation-building campaigns that were more than it could handle in Iraq and Afghanistan. “All together, the sheer size of the expenditures, the sustained confusion about totals and the multiple pressures eroding the stock combine to create a portrait of the Pentagon’s bungling the already-awkward role it chose for itself — that of state-building arms dealer, a role that routinely led to missions in clear opposition to each other,” Chivers wrote. 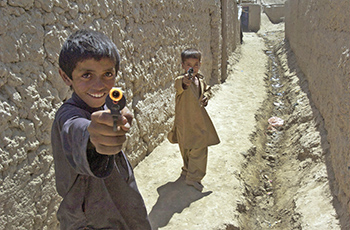 Keeping tabs on small arms in chaotic warzones where illiteracy, corruption, abuse and incompetence are rampant is already a difficult task. Doing it while trying to fight off enemy attacks, train nascent security forces, rebuild infrastructure and install democratic institutions is infinitely harder. It’s little surprise then that entire caches of U.S.-supplied weapons, from artillery to armored personnel carriers, have been lost or captured by enemy forces in Iraq and Afghanistan (and to a lesser degree Syria).

As the number of U.S. troops winds down in Afghanistan, the problem of missing firearms has trickled down to beleaguered Afghan forces. A 2014 report by the Special Inspector General for Afghanistan Reconstruction (SIGAR) found that 43 percent of U.S.-funded small arms had missing information or duplicated serial numbers. That’s because the Pentagon organizes its weapons intended for Afghanistan with two information systems that are not linked and require manual entry, according to the report. Afghan officials were also cited for not correctly entering accurate information in their own separate inventory management system.

“This issue will be compounded as the number of ANSF [Afghan National Security Force] personnel decreases to lower levels in the coming years,” the SIGAR report warned. “Without confidence in the Afghan government’s ability to account for or properly dispose of these weapons, SIGAR is concerned that they could be obtained by insurgents and pose additional risks to Afghan civilians and the ANSF.”

James Cullum is a contributing writer and photographer for The Washington Diplomat.