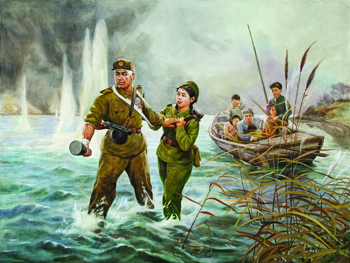 Pak Ryong-sam’s 1977 “Farewell” is among the examples of North Korean Socialist Realism-inspired art on display at the American University Museum.

This summer, Washingtonians have the chance to delve into the secretive, oppressive regime of North Korea through an exhibition that takes viewers beyond the country’s signature artistic mix of kitsch and propaganda.

“Contemporary North Korean Art: The Evolution of Socialist Realism” is the first show of its kind in the United States, curator BG Muhn told The Washington Diplomat, and he said he hopes it brings to light elements in the country’s art world that challenge stereotypes about expression inside the Hermit Kingdom.

Socialist Realism was the officially sanctioned art form in communist countries, notably the Soviet Union, that was intended to glorify socialist ideals. “The style is something that most people outside of North Korea have never had a chance to see before,” Muhn said.

The North Korean regime, a totalitarian state with severe constraints on freedom of expression and devastating violations of human rights, is given a sanitized record in the state-sponsored art on display. The show overwhelmingly features propaganda art, promoting the interests of the state, but there are some surprises in store for viewers in the form of literary paintings by Un Bong that go into the abstract, a rarity in North Korean art, as well as a striking work in progress by Kim In Sok, who takes everyday life in Pyongyang as his subject.

“In general, I agree with the criticism that North Korean art is all propaganda and kitsch, but you have to see more. There is a lot more you can enjoy beyond that level of kitsch, beyond that description,” Muhn said. “The category of kitsch — we all enjoy it. More than 90 percent of art produced in North Korea is kitsch. But we don’t want to ignore the less than 10 percent which is not just propaganda, that is beyond kitsch.” 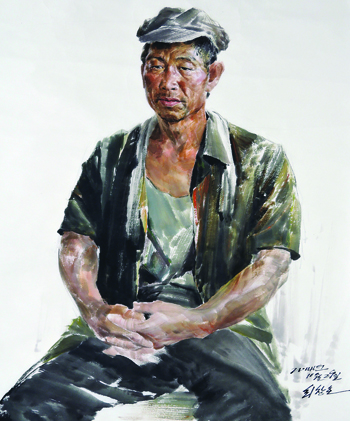 As the show’s title suggests, the exhibition is an exercise in exploring North Korea’s signature artistic style, Socialist Realism. Once the Soviet Union fell, it fell out of fashion — except in the DPRK, where the state artists showcase the genre through the art form of Chosonhwa, which is a traditional painting medium using ink wash on rice paper that absorbed Socialist Realism influences in the 1950s and has since progressed to constitute its own distinct style. Artists in the country have felt little influence from the outside, given North Korea’s closed society, leading the state-sponsored artists to “naturally go to realism,” Muhn said.

“They think art is for people. Art should serve people. That means that people have to understand what’s expressed on the canvas or paper, so that’s why realism is so important to them because the purpose of their expression is serving people,” Muhn said. “That has relation to the state propaganda, but my research and also the willingness to show this work to American society shows it is not only propaganda but something else — something beyond, a deeper expression.”

The exhibition welcomes viewers with a striking Chosonhwa painting of “Tiger Dashing in Winter,” highlighting the painstaking attention to detail that can be found in all of the other images on display. In the main room, however, it is people — in the service of the North Korean regime, of course — that are the focus. 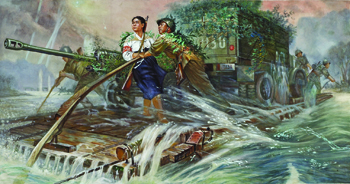 Workers are glorified as they try to pacify and control the elements, as seen in the large-scale painting “Anticipating New Stream of Water Force,” one of two pieces of collaborative art in the exhibition. It’s all about showcasing North Korea’s economic prowess and technological progress and is a work of immense propaganda, but there’s an unexpected focus on the individual workers, each of whose face is composed with care and a unique expression

In the exhibition of 23 images, 10 are from the Choson National Museum of Art — and they are not originals. Nine are examples of North Korean replicated art, pieces officially sanctioned by the state and near-exact copies of the originals by different artists. The tenth, “Women of Namgang Village,” is a duplicated piece of art, or a copy done by the original artist. Like the large-scale collaborative pieces and the emphasis on workers in service only to the state, these replicated works offer an implicit challenge to viewers about the role of individuality in art.

“This is merely just one act of an exhibition,” Muhn said. “I would like to encourage people to see a different society’s work, and try to bring some understanding between the two countries through art and cultural exchange.”