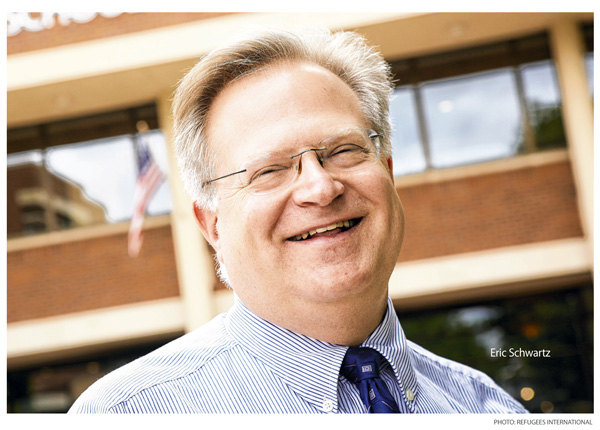 We’ve all seen the haunting images of 3-year-old Syrian boy Aylan Kurdi washed up lifeless on a Turkish beach, or the dusty, bloodied face of Omran Daqneesh, 5, who was rescued from the rubble in Aleppo. These images shock and disturb until the next news cycle seemingly desensitizes audiences.

In June, Refugees International — an independent advocacy group whose board has boasted the likes of George Soros and Queen Noor of Jordan — announced the appointment of its new president, Eric Schwartz, a seasoned diplomat with a three-decade career and a passion to put humanitarianism back on the world’s radar.

“At no point in my professional lifetime has there been as significant of a threat to humanitarianism as over the last several decades,” said Schwartz, who joined Refugees International following a six-year tenure as the dean of the Hubert H. Humphrey School of Public Affairs at the University of Minnesota. “This threat is critical and challenges some values or beliefs that some of us feel are deeply embedded in global politics.”

At the beginning of this year, the United Nations declared a famine in South Sudan, the first since 2011. More than 20 million people, in fact, are now living on the brink of famine in Yemen, Somalia, Nigeria and South Sudan. Out of these, 1.4 million children are now in imminent risk of death. Elsewhere in the world, humans are still risking their lives to reach Europe’s shores in search of better opportunities, with over 5,000 people recorded as dead or missing in the Mediterranean in 2016, the deadliest year on record.

“Over the past year and across the world, borders have been closed, walls have been built and hearts have hardened…. And this is frankly unforgivable,” said Schwartz’s predecessor, outgoing President Michel Gabaudan, at the group’s annual fundraising dinner in April (also see “Refugees International Pleads for Compassion to Help World’s Displaced” in the May 2017 Diplomatic Pouch).

Schwartz is well-equipped to take on these challenges — and apathy. His career spans positions with NGOs, the United Nations and U.S. government, including stints as U.N. deputy special envoy for tsunami recovery and senior director for multilateral and humanitarian affairs on the National Security Council. More recently, he served as U.S. assistant secretary of state for population, refugees and migration between 2009 and 2011, managing a $1.85 billion budget and working to improve America’s refugee resettlement program. That program is now under threat by President Trump’s controversial travel ban, which suspends all refugee admissions and significantly lowers the annual caps on admissions, as well as his proposed budget cuts to State Department funding. 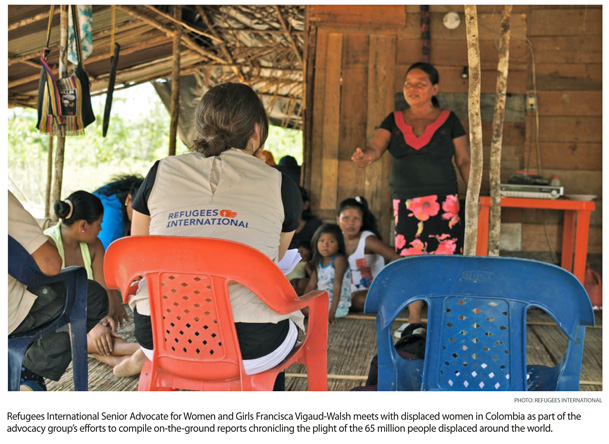 At the tail end of the Obama administration, the U.S. reached a nadir of accepting 10,000 Syrian refugees per year — still a tiny fraction of the over 5 million who have fled Syria to countries such as Turkey and Jordan. Yet the issue of accepting Syrian refugees became a contentious one even before Trump came to power. The debate came to the forefront in 2015 when more than half of America’s governors announced that refugees would no longer be welcome in their states. During that period, Schwartz was invited to testify before the Senate to discuss the possibility of radicals from groups such as the Islamic State infiltrating Syrian resettlement programs. Instead of expounding on the infinitesimal threat of terrorists who manage to elude a years-long screening process, however, Schwartz pointed out the economic edge that immigrants have given the U.S. over the years.

“Immigration — including the entry of refugees who are often so determined and entrepreneurial — is a critical factor in enabling the United States to avoid many of the very troubling demographic trends that bedevil other industrialized countries less hospitable to immigrants,” he said.

At Refugees International, Schwartz is determined to continue this advocacy on behalf of the world’s most vulnerable. Because the organization does not accept funding from governments or the United Nations, a bulk of its work focuses on rigorous on-the-ground assessments used to secure more assistance for the world’s displaced. Its reports have chronicled the devastation in Haiti following Hurricane Matthew; the lack of opportunities for displaced Syrians in Turkey; and the large gaps in humanitarian funding for the violence-plagued Central African Republic.

That mission has taken on added urgency in light of the Trump administration’s relegation of human rights to the bottom of his foreign policy agenda, which emphasizes defense over diplomacy and development.

“Traditionally, whether you were dealing with Democratic or Republican administrations, there was a shared consensus on the U.S. being an international leader on humanitarian response. With some respects, in the new administration, there is uncertainty on whether that consensus exists,” Schwartz said.

One crucial area where the organization has focused its efforts is on the administration’s proposed budget cuts to the State Department and foreign aid — an estimated 28 percent that includes the elimination of key programs and emergency reserve funding for refugee assistance. During several hearings in June, senators from both parties admonished the Trump administration’s international affairs budget cuts that gut soft power in favor of hard power as “a total waste of time” and “dead on arrival.” 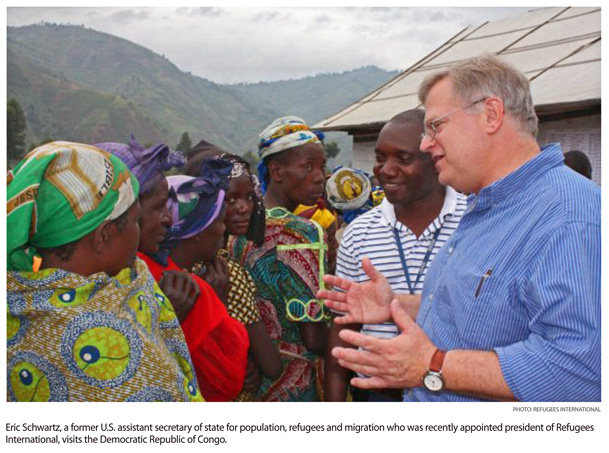 In a June 13 statement, Refugees International had strong words about slashing the international affairs budget, which together comprises just 1 percent of federal spending: “Secretary of State Rex Tillerson today had the unenviable task of putting lipstick on a pig, suggesting that a foreign aid budget request with draconian cuts represents responsible stewardship of U.S. foreign policy,” the group said. “With unprecedented humanitarian needs around the globe, this is no time for the United States to slash its aid budget and leave millions of people at greater risk of suffering.”

Despite the bleak budget environment under Trump, Schwartz sounded a diplomatically hopeful note. “I believe there are some voices in the new administration that are sympathetic of this perspective, and they also need to be spoken to and engaged with.”

These humanitarian needs extend to climate change-induced displacement — a phenomenon not commonly associated with mass migration, and another area where Refugees International is at odds with the White House (Trump’s fiscal 2018 budget would slash all climate-related initiatives). The Internal Displacement Monitoring Centre estimates that an average of 22.5 million people have been displaced by climate- or weather-related events since 2008.

“There has always been humanitarian suffering — this isn’t something unique to 2017,” said Schwartz. “Right now, there is a short supply of enlightened, forward-leaning leadership … [which is] critically important in helping articulate a narrative of support, of tolerance, of sympathy for the plight of those who are most adversely affected.”