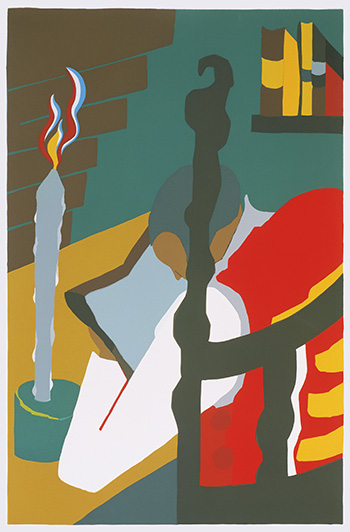 Collection of Di and Lou Stovall

Haiti’s battle for independence from French colonial rule is seen through the eyes of one of America’s most renowned African American artists in 15 rarely displayed silkscreen prints at the Phillips Collection.

During his lifetime, Jacob Lawrence (1917-2000) became one of the nation’s most important African American painters. His vivid, cubist-inspired works focused on historical themes, including his famed “Migration Series” that chronicled the movement of millions of African Americans from the rural South to the urban North beginning in World War I. This series of silkscreens made between 1986 and 1997 mirrors Lawrence’s fascination with the quest for freedom and social justice by focusing on Haitian revolutionary leader Toussaint L’Ouverture (1743-1803).

Lawrence’s first major exhibition at the Baltimore Museum of Art in 1939 featured 41 tempera paintings that depicted the life of L’Ouverture. The series brought the then-largely unknown Lawrence to national prominence. He later distilled the story in the original 41 paintings to 15 works that were expanded in scale.

Important figures in African American history who played a key role in the abolitionist cause were a common subject of Lawrence’s work. His paintings portrayed abolitionists such as Frederick Douglass, Harriet Tubman and John Brown. In fact, Brown’s own aborted 1859 slave uprising came after careful study of L’Ouverture and the Haitian Revolution.

Born a slave, L’Ouverture played a critical role in the 1791 armed struggle that led to Haiti becoming the second independent country in the Western Hemisphere and the first to ban African slavery in modern history. Yet L’Ouverture would not live to see it. After being captured by French forces, he died in a French prison cell in 1803, shortly before the most violent stage of the conflict and just months before Haiti would declare independence in 1804.

As a slave, L’Ouverture was a skilled horseman and coachman. This biographical detail might’ve played a crucial role in his future life as a leader of the slave rebellion in the colony of Saint-Domingue by allowing him to travel widely and plant the seeds of revolution. As a result, several of Lawrence’s paintings feature equestrian scenes, including one that shows L’Ouverture driving a carriage. One of the best on display is “Toussaint at Ennery,” which looks more like a horserace than a cavalry charge. While the scene is dominated by the vibrant use of blue, L’Ouverture is depicted on a white horse charging in neat order amongst his troops.

L’Ouverture was referred to by many of his contemporaries as a “Napoleon Noir.” Perhaps Lawrence’s depiction of L’Ouverture on a white horse among his men is meant to contrast with Jacques-Louis David’s 1801 “Napoleon Crossing the Alps,” a painting that famously captures Napoleon on a rearing white horse in full military glory. 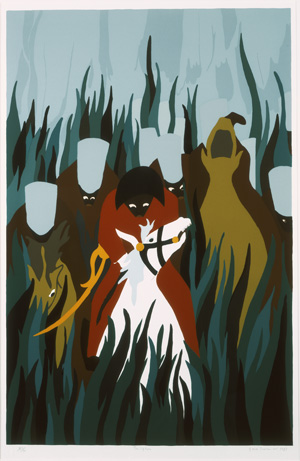 Another nickname L’Ouverture earned was “Black Spartacus,” a reference to the ancient gladiator who led a slave revolt against the Roman Empire. After teaching himself to read French and some Latin, L’Ouverture studied ancient history and tried to learn from the battles of Julius Caesar in commanding his own forces. At its height, his army of 50,000 was larger than any such army commanded by U.S. President George Washington.

Many of the paintings focus on the martial aspects of L’Ouverture’s rebellion. His political acumen often matched his military prowess, as L’Ouverture skillfully fought at various times for the French, British, Spanish and for the cause of Haiti itself. The United States and Britain, both concerned that the Haitian Revolution could become a hemisphere-wide anti-slavery revolt, signed diplomatic agreements with L’Ouverture.

Lawrence, who was born in 1917 in New Jersey, had his own experience with war and military service. During World War II, he served in the U.S. Coast Guard aboard a vessel that became the first racially integrated warship in U.S. service since the Civil War. As a crewman, Lawrence saw Italy, Britain, Egypt and India, along with some of the horrors of war.

In 1946, Lawrence received a Guggenheim Fellowship to paint his famous “War Series,” which illustrates many of the stylistic features for which he is known. These flourishes include prominent eyes, bright colors and silhouetted figures whose profiles often overlap. Lawrence’s distinct style evokes ancient Egyptian wall paintings but his bold colors and geometric shapes reference cubism. These compelling visual narratives of history and the human condition are made all the more powerful by the simplicity of Lawrence’s abstract creations. 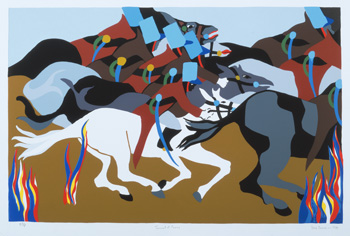 When Lawrence painted his original L’Ouverture series in the 1930s, it was in the context of a wider rediscovery and appreciation of the slave leader’s accomplishments. A similar revival is taking place today, with recent treatments in film and television, along with last year’s publication of “Toussaint Louverture: A Revolutionary Life,” the first English-language biography of him in 80 years.

Lawrence is also enjoying a revival of sorts a century after his birth. Since acquiring 30 panels of Lawrence’s epic “Migration Series” in 1942, the Phillips has been dedicated to celebrating the life and legacy of the artist. This current exhibition is on display while “The Migration Series” travels to the Seattle Art Museum for a reunion celebrating the 100th anniversary of Lawrence’s birth.

Joseph Hammond is a freelance writer in Washington, D.C.