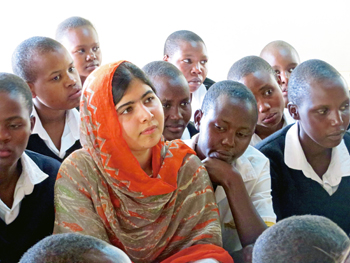 Malala Yousafzai visits the Kisaruni Girls School in Massai Mara, Kenya, in 2014. “He Named Me Malala” documents how Yousafzai became a global figure after being shot in the head for attempting to go to school in Pakistan.

American director Davis Guggenheim’s versatile career has ranged from award-winning television series (“NYPD Blue,” “ER”) to middling narrative theatrical features (“Gracie,” “Gossip”). He’s best known for provocative, acclaimed documentaries such as “An Inconvenient Truth” and “Waiting for ‘Superman'” that managed to reach a sizable audience and achieve a level of impact that would be enviable for most documentaries.

Distributor Fox Searchlight is betting that his latest doc, “He Named Me Malala,” will receive comparable critical and commercial success, planting it to be a leading contender in the upcoming awards season. The respectful biographical film, which Guggenheim wrote, directed and produced, is based on the book “I Am Malala,” the 2013 autobiography of 18-year-old Pakistani Nobel Peace Prize Laureate Malala Yousafzai.

At 15, Malala unintendendly became a global figure after the Pakistani Taliban shot her in the face after school in the country’s Swat Valley. The attack was in retaliation for her and her father’s public advocacy of educating girls. After extensive medical treatment and surgeries, Malala survived the serious injuries from the assassination attempt and is now living with her family in Birmingham, England. She’s used her celebrity status to speak publicly as co-founder of the Malala Fund, which promotes education for girls.

“He Named Me Malala” benefits from the very compelling subject matter. The film is at its best when allowing Malala, extraordinarily poised for a teenager, to speak for herself. Less successful are the animation sequences recreating events, which Guggenheim ostensibly employed to break up the usual talking heads that tend to dominate documentary filmmaking. Animator Jason Carpenter’s pastel drawings are beautiful but don’t quite click into place within the doc’s overall aesthetic.

The film’s opening animation relates the tale of Malala, the 19th-century female warrior venerated as a freedom fighter against the British occupation, the namesake of our contemporary heroine. The film’s title, “He Named Me Malala,” references and emphasizes her close and controversial relationship with her father, Ziauddin Yousafzai. His aggressive push for Malala’s education was unusual in their community, also making him a target of the Taliban. Some critics allege that Malala is merely a puppet whose strings are pulled by her father, a charge that the film brings up but doesn’t really address. 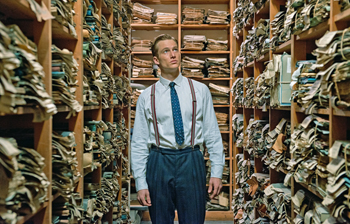 Alexander Fehling stars as a prosecutor who investigates how West German society buried its recent Nazi past in “Labyrinth of Lies.”

Italian-born writer-director Giulio Ricciarelli makes a solid narrative debut with his German feature “Labyrinth of Lies,” which goes back to basics to play methodically as a classic whodunit under his taut direction. Ricciarelli and co-writer Elisabeth Bartel’s smart screenplay depicts a gripping account of how 1950s West German society buried its recent Nazi past and the war crimes of World War II. Their characters are enlivened by a fine ensemble cast, most notably actors Alexander Fehling amd Gert Voss, the late veteran thespian to whom the film is dedicated.

In 1958, fastidious young prosecuter Johann (Fehling), a composite character of three historical figures, holds ambitions beyond the Frankfurt traffic court where he is currently assigned. Work is not all dull and no play; he does meet his love interest Marlene (Friederike Becht) when she commits a minor violation.

Things change for Johann after dogged journalist Thomas (André Szymanski) insists that the prosecuter’s office take seriously the report of his artist friend Simon (Johannes Krisch), an Auschwitz survivor who recognized a former Nazi now working as a schoolteacher. Simon’s allegations have been previously ignored, but Johann takes it upon himself to start an investigation despite his immediate superior’s objections.

The ensuing snowball brings to Johann’s attention the pervasive presence of former Nazis in West Germany. Such revelations are by no means news to his big boss, Chief Prosecutor General Fritz (Voss), who encourages and entrusts his junior staffer with the sensitivity of the case. Johann tediously combs through the file cabinets at the U.S. Army Document Center and collects the shocking testimony of Holocaust survivors, assisted by his diligent secretary (Hansi Jochmann).

The plot thickens as Johann uncovers the sprawling nature of Auschwitz’s organization. He eventually must face the harsh reality that family members, relatives of people close to him and indeed much of German society may have been involved. 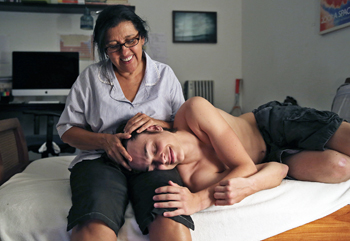 Regina Casé stars as a live-in housekeeper who becomes a surrogate mother to the Brazilian family for whom she works in “Second Mother.”

At the 2015 Sundance Film Festival, the well-received world premiere of “The Second Mother” by Brazilian writer-director Anna Muylaert’s could definitely be characterized as a big success. Co-stars Regina Casé and Camila Márdila shared the Sundance World Cinema – Dramatic Special Jury Prize for Acting. Just a couple of weeks later at the Berlin International Film Festival, Muylaert snagged the Panorama Audience Award for Fiction Film and the CICAE Panorama Prize.

The talented ensemble cast of “The Second Mother” is a delight to watch, but Casé’s presence dominates the frame in a welcome return to the big screen after years in television. Muylaert previously worked as a film critic and writer of screenplays directed by others. Her own intelligent screenplay elegantly lays out the subtle, complicated issues of class that are intrinsic in society, particularly in Brazil and Latin America, questioning the true meaning of family.

For 13 years, Val (Regina Casé) has loyally served as an in-house housekeeper, cook and nanny for an affluent family in São Paulo. She’s been around for so long that she has largely raised the family’s teenage son Fabinho (Michel Joelsas), who considers her a surrogate mother. He turns to her for love before his biological parents, patriarch Dr. Carlos (Lourenço Mutarelli) and mother Bárbara (Karine Teles). In fact, all three family members treat Val with more affection and respect than each other.

Tending to her employers’ constant desires meant that Val had to leave behind her daughter Jéssica (Camila Márdila) on the other side of Brazil with Val’s estranged ex. Alas, Val and Jéssica haven’t set eyes on each other for over a decade. Unexpectedly, Jéssica rings Val, asking to stay with her while taking her university entrance exams, just as Fabinho is preparing to do as well. As Val is considered family, Bárbara welcomes Jéssica as a houseguest.

That turns out to be the opening of Pandora’s box. As a newcomer unfamiliar with the household norms, Jéssica fails to heed the tacit boundaries that have long separated Val and the other servants from their employers. First, she quickly decamps Val’s small servant’s room for the more luxurious guest room. The sudden thrust into the household of a spunky, attractive young woman disorients the men of the house. Carlos becomes excessively supportive of Jéssica’s ambition to gain entrance to Brazil’s top architecture university. With Carlos’s approval, she digs into the ice cream that is normally Fabinho’s domain. And Val is scandalized that Jéssica is stepping out of her place!