Home The Washington Diplomat July 2011 Ridership Rises at Area Airports, But Turbulence May Lie Ahead 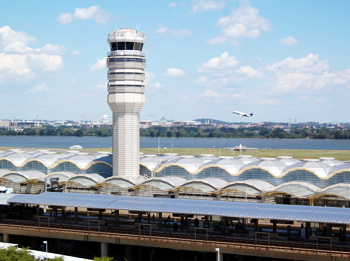 For the first time since 2007, all Washington area airports saw a growth in ridership in 2010, a reflection of the area’s general economic health and of specific gains at its three major airports. But this year, rising oil prices may make for a bumpier ride.

D.C.’s Reagan National Airport, above and opposite page, served 18.1 million passengers in 2010, a 3.1 percent increase over 2009 — reflecting similar trends at all three major Washington area airports, which collectively saw ridership increase for the first time since 2007.

But the biggest jump was at Baltimore-Washington International Marshall Airport (BWI) in Maryland, one of only two major U.S. airports to show growth in 2009. In 2010, BWI set an annual passenger record, with 21.9 millions riders — a 4.7 percent increase on the previous year.

Driving the growth, according to BWI spokesman Jonathan Dean, is “the strength of the region. The Washington-Baltimore region remains attractive to airlines due to the strength and growth in this market.”

Another critical factor is the popularity of low-fare flights — largely attributable to Southwest Airlines, which recently purchased AirTran Airways and now operates 70 percent of the flights at BWI.

Meanwhile, some of the growth at Dulles International and Reagan National was thanks to a host of new services introduced at the airports over the course of 2010.

At Dulles, Bolivian airline AeroSur launched a weekly nonstop service to Bolivia, Turkish Airlines began flying four times a week to Istanbul, and OpenSkies, a subsidiary of British Airways that offers business class-only flights, started a service to Paris Orly International Airport (also see “Ready for Liftoff: OpenSkies Is All Business in Its Push To Resurrect Air Luxury” in the July 2010 issue of The Washington Diplomat). Most recently, Icelandair launched nonstop flights in May from Dulles to Keflavik International Airport outside Reykjavík — having pulled out of BWI in 2008. In addition, JetBlue and Delta both began to offer multiple new domestic flights from Reagan National.

But whether the upward trend will continue this year, at all three airports, is still unclear. For both Reagan National and BWI, the figures are looking good. Dean pointed out that in March 2011, the most up-to-date statistics available, 1.88 million travelers flew through BWI — another new record for the month of March, representing a 3.3 percent increase from March 2010. “BWI has set new monthly passenger records in 10 of the past 11 months,” he noted.

Reagan National has experienced an equivalent boost in passengers, with 1.64 million travelers passing through the airport in March 2011, a 3.3 percent increase from March of the previous year.

With 1.93 million passengers in March 2011, though, Dulles is the only airport to have witnessed a fall (2.8 percent) in passengers from the same point the previous year.

Despite the recent surge, there are varying outlooks for the busy summer holiday season.

Tara Hamilton, a public affairs manager for the Metropolitan Washington Airports Authority (MWAA), which operates both Dulles International and Reagan National, is more circumspect, explaining, “It is always hard to predict what will happen since the overall economy has an impact on travel.”

In fact, airlines are notoriously vulnerable to a whole range of external factors. In early June, the International Air Transport Association (IATA), the airline industry trade group, drastically downgraded its profit forecast to $4 billion. That is less than half of their original forecast of $8.6 billion in March — and a far cry from the $18 billion net profits airlines reaped in 2010.

The reasons, according to Giovanni Bisignani, IATA’s director general and chief executive officer, are multiple. In a statement, Bisignani said, “Natural disasters in Japan, unrest in the Middle East and North Africa, plus the sharp rise in oil prices have slashed industry profit expectations to $4 billion this year. That we are making any money at all in a year with this combination of unprecedented shocks is a result of a very fragile balance. The efficiency gains of the last decade and the strengthening global economic environment are balancing the high price of fuel.”

Passengers though have already been feeling the pinch of global shocks. A number of airlines have tacked on additional fuel surcharges to ticket prices to try to protect their bottom lines from soaring oil prices.

MWAA’s Hamilton hopes that the special characteristics of the Washington region, with its international inhabitants and capital attractions, will mitigate the adverse impact of oil instability. “The price of fuel affects the decisions airlines make about their service patterns. However, the Washington region is a major destination for travelers, whether for business or tourism, and airlines find service to our market to be a good revenue generator,” she said.

Improvements on the Ground 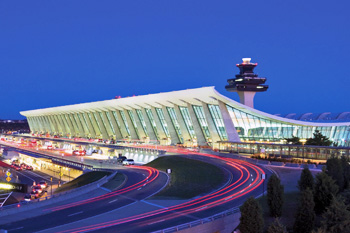 Dulles International Airport has recently added a host of new services and upgrades, including the launch of nonstop service to Bolivia, Turkey and Iceland, as well as a long-awaited automated airport train system dubbed AeroTrain.

Washington area airports have a mixed track record when it comes to customer satisfaction. In a 2010 survey carried out by J.D. Power and Associates, BWI came out in front with 707 out of 1,000 points. Reagan and Dulles got 672 and 646 respectively, below the average for medium-size airports of 690.

BWI also comes out in front in terms of affordability, which no doubt has propelled the larger passenger figures at BWI, where the price of domestic airline tickets is consistently well below the national average. According to U.S. Bureau of Transportation Statistics, in the fourth quarter of 2010, the average domestic fare at BWI was $284. At Reagan and Dulles, the figures were $360 and $420, respectively.

Yet low cost is not the only factor passengers consider when they are thinking about buying a ticket. J.D. Power and Associates asked 12,000 customers about their entire airport experience, from airport accessibility, baggage claim, the check-in process, terminal facilities, as well as security check and food and retail services. These are all areas that the three major Washington area airports have been trying to improve in recent years.

Dean points to BWI’s newly opened Airspace Lounge as proof of his airport’s consistent attention to customer needs. Located on Concourse D, the lounge can be used, for $17.95 a day, by any traveler regardless of the airline on which they are flying. In the swanky modern space, passengers can enjoy complimentary food and beverages while tapping into free WiFi or using the lounge’s MacBooks and Windows computers.

Hamilton said that Dulles International and Reagan National have also been “working to increase passenger amenities at both airports, with more offerings in our concessions and creating an art program to enhance the facilities and provide some viewing pleasure for our customers. You’ll see that art throughout the terminals and in the International Arrivals area at Dulles.”

Far more important than paintings on the wall, Dulles has just finished almost 12 years of continuous expansion construction, with a new runway, new air traffic control tower, an expanded Concourse B, new roadways, and a much-publicized automated airport train system dubbed AeroTrain to replace the outdated mobile transport lounges. Finally operational in January 2010, after significant delays, the sleek AeroTrain system connects passengers from the Main Terminal to the A, B, and C Gates at speeds of up to 42 miles an hour.

In April 2011, the MWAA also announced that WiFi, which travelers previously had to pay for unless you were lucky enough to already have a service-provider account, would now be free of charge for everybody at Dulles International and Reagan National.

Looking ahead, probably the most important project in the works remains the construction of the Silver Line Metro, which would connect the airport with downtown Washington, D.C., much like Metro now does with National.

As Hamilton points out, “The Silver Line is important because multi-modal options for a major international airport are expected, and we will be pleased to offer mass transit as well as our other options.”

The Silver Line project though was recently thrust back in the headlines over disagreements about what form the station at the airport should take. In April 2011, the MWAA voted to build an underground station at a cost of $330 million more than an above-ground version. Officials from Loudoun and Fairfax Counties, whose taxpayers would have been responsible for footing part of the bill, reacted with anger.

At the end of May, the fighting over funding got so heated that U.S. Secretary of Transportation Ray LaHood was forced to intervene, giving local officials a month to find a compromise and agree on cost estimates.

Hamilton defends Dulles’s decision to back an underground system as a convenient alternative, despite the added costs. “The above-ground station was not the original location in the planning for the rail system and would be located 1,200 feet away from the Main Terminal,” she explained. “The project called for an underground station that would connect directly into the Main Terminal at a 600-foot distance. This planned station would be more convenient, direct and protected from the elements.”

Three-quarters of the cost for the second phase of the Silver Line construction is to be funded using revenue from the Dulles toll road. MWAA is currently working to finalize plans for the entire second phase, which, Hamilton noted, includes looking at all options for cost savings.

The Silver Line is currently expected to be completed in 2017.

Lois Kapila is a freelance writer in Washington, D.C.