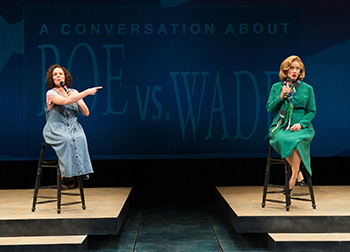 Sara Bruner (as Norma McCorvey), left, is looking to end an unwanted pregnancy while Sarah Jane Agnew (as Sarah Weddington) is looking to strike down America’s abortion laws in “Roe,” which showcases the two women at the heart of the landmark Supreme Court decision that legalized abortion.

Roe v. Wade, the Supreme Court decision that legalized abortion and revolutionized feminism in the early 1970s, is again at the forefront of America’s political consciousness — and is as divisive as it was over 40 years ago.

President-elect Donald Trump has vowed to appoint conservative justices to the Supreme Court who could possibly overturn the landmark ruling, though, as with many of his campaign pronouncements, the only consistency in his position is that there is no consistency. Trump vaguely told CBS’s Lesley Stahl that if abortion were outlawed, the issue would go back to the states.

That is little comfort to pro-choice advocates who worry that the Republican billionaire’s presidential victory will erode women’s rights. But it is welcome news to pro-lifers who’ve spent decades fighting to reverse Roe v. Wade.

Arena Stage is wading into the reignited culture wars over women’s bodies with “Roe,” a world premiere that focuses on the two women at the heart of the infamous case and the divergent paths their lives took, which in many ways mirror the larger national divide over abortion.

Bill Rauch, director of the newly commissioned play, is well aware that the contentious issue is making headlines again.

Rauch is the artistic director of the Oregon Shakespeare Festival, which commissioned 37 new American plays to examine significant moments in U.S. history. He tapped playwright Lisa Loomer, who has written about issues such as how women alter their bodies in the quest for beauty, to pen “Roe,” which opens at Arena Stage in January.

“With the recent presidential election, and with Trump clearly being anti-choice and talking about defunding Planned Parenthood, the timing of doing this play couldn’t be better,” Rauch told The Washington Diplomat, noting that the play opens days before Trump’s inauguration. “The atmosphere in the nation’s capital will be intense.”

Audiences may assume that in a decidedly left-leaning town like D.C., “Roe” might tilt toward the pro-choice side, but Rauch says the play refrains from taking sides. 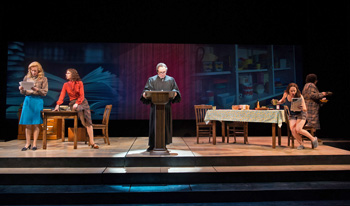 “What struck people in Ashland [Oregon], when they saw the premiere of ‘Roe,’ is the respect that the writer, Loomer, has for the humanity of all the play’s characters,” Rauch said. “You might think that ‘Roe’ would be a lecture or diatribe — a partisan piece. But what I love about Lisa’s writing is that she’s very interested in taking a polarized issue and humanizing people on both sides of the issue. Whatever your point of view, it will be expressed in ‘Roe.’”

The play traces the lives of the two women central to the story: Sarah Weddington, a strait-laced, brilliant lawyer who doggedly challenged Texas’s abortion ban at the age of 26; and Norma McCorvey, a poor, wild-tempered 21-year-old girl with a troubled upbringing who was seeking to end her third pregnancy. An unlikely and reluctant poster child, McCorvey was recruited to be the plaintiff in the case, going by the pseudonym “Jane Roe.”

The court case dragged on and McCorvey ultimately had the baby, giving it up for adoption. In 1980, she revealed her identity as Roe, came out as a lesbian and staunchly advocated for abortion rights. Years later, McCorvey did a dramatic about-face. She became a born-again Christian, joined the pro-life movement, renounced her lesbianism, criticized Weddington for using her as a pawn and was herself criticized as an opportunistic charlatan. Meanwhile, Weddington went on to become a member of the Texas House of Representatives, a professor and a prominent speaker who continued to push for abortion rights.

Both women built lives and careers around an issue that defined them in starkly different ways. Weddington waged a national campaign to give American women freedom over their bodies. For McCorvey, it was a personal battle that haunted her for years to come.

“The play exposes these two different women from their lives in 1969 to the present day,” Rauch said. “I’ve been amazed of how few people know the details of this story, how the case was argued and what happened after the case was argued. I’m also struck by the fact that the play is surprisingly entertaining. Lisa has a wonderful comic ear, a lot of humor and lightness of touch. Since it traverses over 45 years, there’s plenty of room for vibrant storytelling.”

The two main actors, Sarah Jane Agnew, who plays Weddington, and Sara Bruner, who plays McCorvey, “are both fierce, funny and moving powerhouses,” Rauch said. “We also have a strong design team. The set and costuming work form metaphors. The set literally divides in two at one point, which characterizes the increasingly polarizing issue of abortion.”

“They’ll change costumes on stage and become other characters. The play is all about the opportunities and limitations of transformation,” he said. 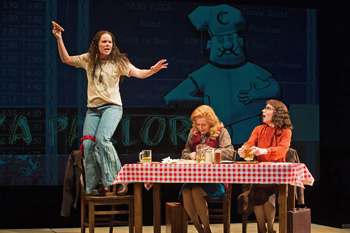 Rauch said that even though Roe v. Wade is unique to the United States, its relevance can be felt the world over.

“Roe v. Wade was such an important episode in American history’s reproductive rights and justice, but it also is such a potent issue for people around the world,” Rauch said. “There are countries that are more permissive and restrictive on abortion than the United States. I can’t recommend this play highly enough for the diplomatic community.”

Rauch said the decision to commission 37 new plays for the Oregon Shakespeare Festival that chronicle profound moments in American history was inspired by Shakespeare’s history plays.

“Shakespeare dramatized the transfer of power in England, addressing all the accompanying anxiety, insecurity, fears and changes of his age,” Rauch explained. “I wanted to do the same thing for this county.”

Like the Oregon Shakespeare Festival, Arena Stage is delving into this contentious moment in U.S. history with the launch of “Power Plays,” an ambitious initiative commissioning and developing 25 new plays and musicals from 25 writers over the course of the next 10 years.

The project will highlight American stories of politics and power, exploring the people, events and ideas that helped shape the country’s narrative and identity, with one story per decade, beginning with 1776 through today.

“Power and politics are the red meat of Washington, D.C.,” said Arena Artistic Director Molly Smith. “We eat, sleep and drink politics here from early morning coffee to late-night conversations…. D.C. audiences are hungry for these stories, and there is no other place in the country where these plays could have such an impact.”

“There is no better time to launch this massive commissioning cycle, the largest in Arena’s history,” she added. “The more we understand our American stories of politics and power, the more informed we become as a democracy.”