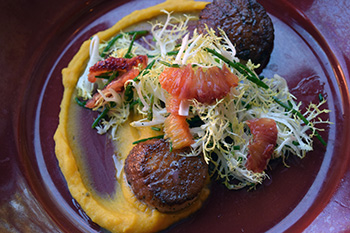 Washington’s restaurant scene has evolved so dramatically over the past decade that it’s a bit surprising when an old standby manages to grab our attention all over again.

Seared sea scallops are among the favorites at Firefly, which opened in 2002.

But that’s exactly what happened on a recent visit to Firefly, the intimate Dupont Circle bistro located just a stone’s throw from Embassy Row, adjacent to the Hotel Madera. Firefly first opened to buzzy fanfare in 2002 and quickly earned a reputation for inventive, upscale American food served in a cozy, glittering space. The restaurant settled in nicely over the years and has remained a solid — if not necessarily essential — choice in the Dupont neighborhood for breakfast, lunch or dinner.

Now, with the arrival of talented young executive chef Jammir Gray, Firefly is again proving its place among the best dining spots in Northwest Washington. Gray honed her skills at top-shelf restaurants in California and Chicago before arriving at Washington’s Firefly six months ago, and she brings a thoughtful but unfussy approach to the new menu. The restaurant has retained its signature aesthetic of raw and lightly polished wood combined with sultry lighting, making it an ideal spot for a date or an evening out with close friends or colleagues.

We arrived feeling hungry on a chilly fall evening and immediately dove into a tasty array of deviled eggs, whose creamy filling was topped with an intriguing sweet pepper-bacon relish. The bacon gave the morsels a slightly salty crunch that contrasted nicely with the sweet pepper relish.

A couple of bowls of soup arrived soon after and helped extinguish a lingering chill from the wet, frigid evening. It’s hard to say which soup was better — the posole stew or a broccoli cheese made with smoked Havarti.

Traditional posole is a New Mexico mainstay featuring hominy and pork, typically simmered for hours in a puree of garlic and roasted red chiles indigenous to the state. I was dubious when I learned that Gray’s version contains none of the smoky-rich red chile. But soon, I was pleasantly surprised. Her version — featuring tender cuts of pork shoulder, red cabbage, cilantro and crispy tortilla chips — had an immediate savory taste that brought to mind Texas, not New Mexico. That was probably the result of the cumin, typically added to a pot of Texas chili (not to be confused with actual red or green New Mexico chiles). In any case, the soup was delicious. In addition to the satisfyingly and savory pork, Gray’s kitchen also nailed the hominy, which if not prepared correctly can be irredeemably chewy. Hers was tender and flavorful, as was the entire dish.

The Firefly kitchen also takes a novel approach to its broccoli cheese soup. In many versions, the green vegetable is an afterthought in a steaming bowl of melted cheddar cheese and cream or milk. Firefly puts the broccoli front and center with small pieces of chopped — not completely pureed — broccoli. The effect was texturally pleasing and gave the dish a broccoli-forward consistency that almost made it seem healthy. Alas, the decadent bite of smoky Havarti cheese ruined the illusion, but this dish was worth every calorie. My only regret was that the bowl wasn’t bigger.

I had a hunch that our order of chicken-fried oysters might be superfluous, and it was. The breading nearly overwhelmed the texture of the tender oysters inside and the “po’ boy sauce” (a routine remoulade) didn’t add much flavor. Not a total misfire, but forgettable nonetheless.

For entrées, we opted for yet another hearty comfort food: a steaming bowl of lamb cavatelli, as well as the lighter sea scallops. The scallops, perfectly seared with a crusty golden exterior and a tender middle, were modest in size with a delicate flavor to match. A drizzle of blood orange reduction added a splash of sweet and sour pizazz, while a side of butternut squash puree made for an appealing seasonal side.

Cavatelli — made from eggless semolina dough — is a thick and chewy pasta that holds up nicely to robust sauces. This version included a sofrito sauce of tomatoes, garlic, oil and onions mixed with pieces of ground lamb. This was a simple but robust dish that hit the spot.

Overall, dining at Firefly again after several years away felt like being reacquainted with an old friend. We look forward to next time. 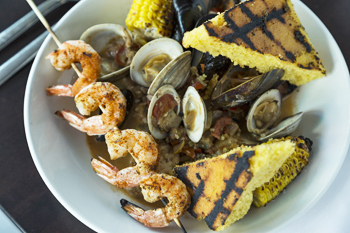 The trendy new restaurants in the District of Columbia seem to generate the most buzz these days, but anyone who has lived and dined in the Washington region for any time knows that it’s not hard to find high-quality dining in the suburbs.

Our latest foray outside D.C. took us to the Grilled Oyster Company in Potomac, Md. Launched a few years ago in the Cabin John Shopping Center by the husband-and-wife team of Valerie and Rick Dugan, the Grilled Oyster Company offers fresh seafood in a modern, 130-seat dining room. The Grilled Oyster Company also has a location in Northwest D.C.’s Cathedral Commons neighborhood. The Potomac location, under the leadership of executive chef Steve Mason, was voted Best New Restaurant by Bethesda Magazine in 2014. We were pleased to find that it isn’t resting on its laurels.

While the Potomac location is in a strip mall, the less-than-glamorous setting is forgotten upon entering the restaurant. A spacious room, punctuated by white tablecloths and bright, modern art with seafaring themes, projects a refined but casual vibe that feels more Chesapeake Bay than commuter suburb. The menu is an expansive delight and offers something for just about anyone who loves seafood — and even a few things for those who don’t. The place has plenty of dips, salads and other starters, raw and grilled oysters, steamed mussels and a full complement of entrées.

It didn’t take long for us to settle on a starter. The name of the restaurant is the Grilled Oyster Company, after all, so we opted for a combination of four of the mollusks, which are grilled until their shells open and then draped with an assortment of garnishes. We were given four options: “Drunken” with bourbon garlic butter; “Fall Harvest” with roasted turnips, carrots, radishes and quajillo salsa; “Rick’s” with a special barbeque sauce and chilled cucumber relish; and “Farmer’s” with roasted beet, rutabaga, sweet potato and celery cream. And we actually liked them most to least in that exact order.

The sweet bourbon garlic butter complemented the warm, briny oyster perfectly, while the Fall Harvest version was bursting with fresh vegetables. We admired the ambition of the Farmer’s version, but less so the execution. There was just too much going on with this particular grilled oyster, leading to a jumble of indistinguishable flavors. But all of the shellfish were generously apportioned and we recommend starting with at least two or three, as they are also sold a la carte.

Heeding the recommendation of our server and some nearby diners, we opted for the Fall Chesapeake Cioppino as an entrée. The seafood soup features grilled shrimp, clams, mussels, rockfish and grilled corn served with homemade cornbread. Another generous dish, the soup’s tomato broth was savory and warm and the assortment of seafood made each bite something of an adventure. This was a smart choice.

The grilled filet mignon with mashed potatoes and a tequila mushroom sauce also hit the spot. The prime cut of meat was well cooked — medium rare — and the tequila mushroom sauce lent an earthy, piquant flavor contrast. Our meal was complemented by friendly service and affordable wine. The Grilled Oyster Company is an altogether pleasant and no-fuss dining experience.

Whether you’re in Washington or Potomac, your chances of enjoying a tasty meal in a relaxed and inviting setting are excellent if you decide to visit either the reliable standby of Firefly or the suburb standout of the Grilled Oyster Company.

Michael Coleman (@michaelcoleman) is the dining reviewer for The Washington Diplomat