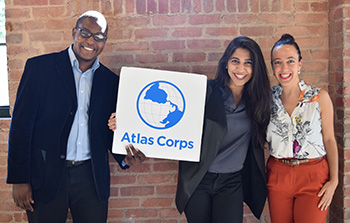 While serving in the U.S. Embassy in New Delhi, India, an idea sparked in Scott Beale’s mind while reading Thomas Friedman’s book on globalization, “The World Is Flat.”

“I said, ‘Well, it’s flat in the diplomatic sector. Diplomats, we take our black passports, we go around the world. It’s flat in the private sector — a guy from India goes to Seattle, invents Hotmail, makes a billion dollars. It’s even flat in the athletic sector. If you’re a really good shortstop in the Dominican Republic, you can go play for the Yankees or even better, for the Nationals. Even athletes are crossing borders.

“But in the nonprofit sector, in the NGO-civil society space, Americans had gone overseas to serve in the Peace Corps. But the idea of someone coming and volunteering in the United States — that just was not even going to happen,” Beale recently told The Washington Diplomat.

Beale saw an opportunity to create an organization that could provide that exact experience for nonprofit professionals, and he left the State Department in March 2006 to start Atlas Corps. Last year marked the 10-year anniversary of his global fellowship program, which brings young nonprofit professionals from around the world to the United States — and has since expanded to sending people to both Colombia and Australia as well.

“People often think of us as the reverse Peace Corps — instead of sending people overseas, we’re bringing people here — but what we want people to think of us as is a global Peace Corps, in that it’s not just about U.S. citizens who are going to go overseas and serve,” said Atlas Corps founder and CEO Beale, whose wife Courtney is a U.S. diplomat. “That is a perfectly great thing, but we need to find ways for young people around the world to serve and citizens of all countries to be able to develop their skills and share their talents.”

Atlas Corps fellows, he told us, are “like citizen diplomats.”

“These are nonprofit leaders who in many ways represent their countries overseas as well,” Beale said.

In 2007, the first group of fellows arrived in the United States — six professionals from India and Colombia, two countries in which Beale and his wife lived and served. Last September, the organization welcomed its 22nd class of fellows, having supported over 500 people from 79 different countries over the last decade. The organization celebrated its anniversary gala in November, and the Colombian ambassador is scheduled to host a private event at his residence in honor of the group. 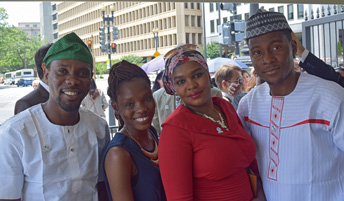 Atlas Corps provides fellowships in the U.S. and Latin America to nonprofit leaders from around the world such as Sudan and Nigeria.

Open to anyone from around the world, as long as they are equipped with a college degree, two years of work experience and the ability to speak English, the fellowship program is fiercely competitive, with close to 10,000 people starting the application process last year alone. Applicants must be 35 or younger at the beginning of the fellowship, and the average fellow is 28 years old with two to 10 years of experience in the nonprofit sector when they arrive. Most fellowships last a year or 18 months. Afterward, fellows return to their home countries to share their skills in the hopes of addressing some of the world’s most pressing 21st-century challenges.

Fellows are placed with host partners such as the American Express Foundation, Enough, Save the Children, Refugees International, Oxfam, UNICEF and the World Wildlife Fund. Organizations come to Atlas Corps looking for candidates, and Atlas Corps sends over the top shortlisted applicants to interview. The host organizations cover about two-thirds of the cost for the fellows, and the rest is fundraised from foundations, individuals and governments. There are 90 fellows active at the moment, and the overwhelming majority is based in the D.C.-area, Beale noted.

Fellows span the gamut of nonprofit work. Yuleidy Gonzalez, for example, is a 30-year-old public health expert from Cuba who is volunteering in New York City as a fellow at Planned Parenthood leading a project to make public health data presented in a visually compelling way. Ankit Gupta of India is an advocate for transgender youth and sexual rights who is working as a program manager with the Gay and Lesbian Victory Institute in D.C. Nchotou Ndimuanga is a biology expert who developed a cervical cancer screening project for women living with HIV in Cameroon and is now working to tackle breast cancer with Susan G. Komen for the Cure in Dallas. Palestinian Asmaa Abumezied, a social entrepreneur from Gaza, is a volunteer in D.C. at Internet2, a tech community that serves higher education institutions.

Mehak Toseef, a current fellow who is working as a training manager at Atlas Corps, came to D.C. from Pakistan after working in the public health sector.

“Working for almost four years in the nonprofit sector in Pakistan, you start identifying some of the areas where there are roadblocks and you feel like, ‘Oh, I wish I had those expertise that could assist me in doing this kind of work,’” Toseef told The Washington Diplomat. “Learning best practices of doing those kind of things, that was my primary motivation when I applied for the fellowship.”

Beyond the professional benefits, Toseef said one of the highlights of the programs has been the Atlas Corps community itself.

“I felt like I really got a chance to meet people from these countries — and not just meet them, like a superficial meet-up or just a happy hour or something,” she said. “You really go deeper and you really understand those people and see where they’re coming from. That’s really the fascinating part of this fellowship program. 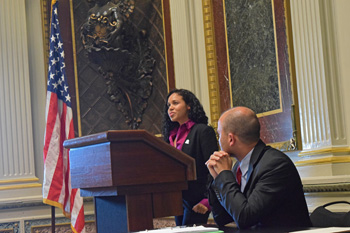 “When we’re training together and when we’re meeting, we don’t have these sort of country conflicts that we have in our mind. We’re just two people trying to address the same concerns in the world. That’s the beauty of this exchange program,” she added.

When Toseef’s fellowship is up, she says she plans to get a master’s degree in public health and return to Pakistan to pursue work in the sector. And she credits her time on the fellowship with spurring her career path. “I’m even more enthusiastic to get back to Pakistan and get right back into it,” Toseef said.

Carlos Jáuregui Portilla, a fellow from Peru, is working in D.C. on the communications team of the nonprofit Social Progress Imperative. He’s spending his days testing social media strategies, writing blog posts and managing the website and email newsletters for the group, which is best known for its Social Progress Index that assesses the social and environmental performance of different countries. Jáuregui Portilla said he waited “for two years for this unique opportunity” to gain new tools for his professional career.

Like Toseef, Jáuregui Portilla told The Diplomat that the other fellows in the program have been the most memorable part of his experience with Atlas Corps so far.

“The best part of this fellowship is to be able to interact with people from around the world,” he said. “There are some fellows from countries that I do not know where they are and I need to look for in a map. I am passionate about intercultural communication and I am thrilled to know about cultures that are new for me.”

Beyond the young professionals they meet, Beale noted that it is “common for our fellows to connect with their home governments here, but it’s actually something we would like to happen more than it does. We want embassies to know about this program because we want to be working with other embassies and consulates and governments around the world.”

“No matter where you go, big cities and small towns, wealthy countries and more developing countries, you meet these smart, passionate people. But opportunity is not universally distributed in this world,” he said.

One of the “beautiful things” about Atlas Corps is “that this is not a way for the U.S. to teach people how to do things,” Beale said. “That’s not the point of this program. The point of Atlas Corps is people are there to learn from each other.… We can learn a lot from development leaders abroad as well. We need to be encouraging partnerships and cooperation, and that’s what Atlas Corps does.”