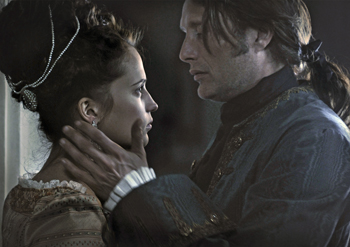 Alicia Vikander, left, and Mads Mikkelsen embark on an affair that takes 18th-century Denmark by storm in the romantic costume drama “A Royal Affair.”

Once again, the end of the calendar year brings the beginning of the annual film awards season, often likened to a race. “A Royal Affair,” Denmark’s official submission to the Academy Awards for the Best Foreign Language Film Oscar, explodes off the starting line in a strong position. The exciting romantic costume drama from Danish director/co-writer Nikolaj Arcel (writer of the original Danish film of “The Girl With the Dragon Tattoo”) leverages a big budget, at least for a non-Hollywood film.

Danish star Mads Mikkelsen (“Casino Royale,” “Clash of the Titans,” “After the Wedding”), an increasingly familiar face to both art house and mainstream audiences, commands the screen with his always-powerful presence as a reformist bringing the Age of Enlightenment to a politically resistant Denmark.

In 1766, 15-year-old British princess Caroline Matilda (Vikander) has come from Britain to Denmark to marry her cousin, King Christian VII (Følsgaard), a couple of years older. Alas, he ignores his new queen, now known in Denmark as Caroline Mathilde, preferring the company of prostitutes. Furthermore, his erratic behavior has reached the point that he’s acknowledged to be truly insane.

When Christian suddenly decides to embark on a grand tour of Europe, senior members of the Danish court send German physician Johann Friedrich Struensee (Mikkelsen) along to treat the king. The royal doctor achieves some success in moderating Christian’s excesses and comes to care for his patient, a feeling which is reciprocated. After two years of travels, Christian returns to Copenhagen, still accompanied by Struensee.

As a rational scientist, Struensee is a true man of the Age of Enlightenment who reads Jean-Jacques Rousseau and Voltaire. Such modern thinking excites Caroline and convinces Christian, who even gives Struensee a power of attorney. The king proposes reforms like repealing censorship, limiting the Church’s power, ending torture, public vaccinations, giving rights and even freedom to serfs, etc. The radical initiatives are continually blocked by reactionary, Church-influenced nobles unwillingly to give up their privileges and riches.

Meanwhile, in their personal lives, Struensee falls passionately in love with Caroline, who has stoically suffered through her husband’s madness and indifference. The love triangle might be more awkward if Christian cared, but the gossip is undoubtedly damaging. Certainly, the illicit affair provides fuel for Struensee’s deposed political enemies to attack him in the court of public opinion, using the new reach of the printing press, in their effort to regain authority over Denmark.

The three leads are supported by strong performances from a solid ensemble cast. Perhaps most importantly, Arcel’s direction is made much easier by the refined screenplay he wrote with Rasmus Heisterberg, which won them a Silver Bear at Berlin. Arcel’s steady direction also benefits from gorgeous cinematography, stirring original music, crisp film editing, sumptuous production design and believably authentic costume design. 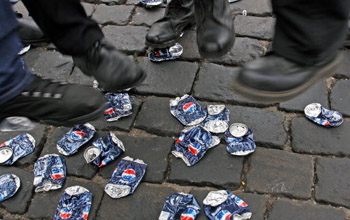 With the saucy comedy-drama “Generation P,” Russian director/co-writer Victor Ginzburg audaciously attempts to translate to the big screen Russian author Victor Pelevin’s well-read novel of the same title, which references the embrace of the iconic Western brand Pepsi-Cola by an emerging Russian demographic after the fall of communism. The film achieves a significant degree of success, overcoming the doubts of many naysayers, including the novelist himself, who didn’t think a cinematic version could ever work.

Victor and Djina Ginzburg’s irreverent screenplay manages to pull enough semblance of a story out of Pelevin’s fairly plot-less book. The biting sociopolitical satire still packs a punch, even though some specific local elements may be a bit too obscure for non-Russian audiences. Any confusion might actually amplify how audiences empathize with the characters struggling to navigate the wide cross-cultural divide between East and West. The kinetic direction stylishly depicts the chaos following the collapse of the U.S.S.R., often vividly illustrated by psychedelic pieces fittingly borrowed from the novel’s postmodern text.

Beginning in the early 1990s, Russia’s brave new world comes to be dominated by the growth of power-wielding groups, including insincere politicians, cutthroat Russian mafia, flaunting nouveau riche, and crafty ad executives. A random encounter with an old buddy offers aspiring poet Babylen Tatarsky (Vladimir Yepifantsev), whose name alludes to Lenin and Babylon, a chance to finally leave his tedious day job at a dreary convenience store. Once a student of literature, now jaded, he redeploys his writing talents to the newly essential field of advertising, pitching the sudden influx of formerly banned Western goods to Russian consumers.

Babylen rapidly develops into a rising star, leveraging his knack for knowing how to make Russians want to buy his clients’ products. When he runs out of ideas, he seeks to overcome his writer’s block by fueling his imagination with vodka, acid, magic mushrooms, cocaine and the occult. He becomes immersed into a secret society that appears to be orchestrating, behind the scenes, the revolutionary movements of the rapidly changing post-Soviet society. And his indoctrination into the mysterious Babylonian cult leads to an opportunity for yet another new beginning. 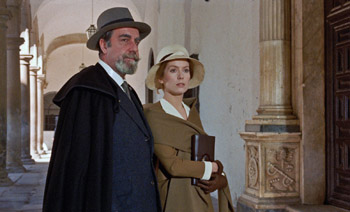 No dedicated cineaste should miss Spanish surrealist filmmaker Luis Buñuel’s classic “Tristana” in its current re-release, sporting a sparkling new digital restoration after years in which only well-faded prints were available on the repertory circuit.

Often considered one of the director’s best works, “Tristana” was originally distributed in 1970, near the end of Buñuel’s lengthy career, which started in the silent era of the 1920s. At the height of his powers, Buñuel deftly helms the well-structured screenplay, elegantly adapted from Benito Pérez Galdós’s 1892 novel, carefully addressing a good number of unpleasant themes.

In Toledo, Spain, during the 1930s, lovely young Tristana (Deneuve) is stranded after the death of her mother. Don Lope (Rey), an affluent middle-age gentleman, quickly steps into the picture, offering to provide Tristana a sanctuary off the streets in his abode. Don Lope sees her in peculiar dual roles as both a daughter and a wife. Almost near instantly, he leverages his position of authority over his naïve ward, seducing her. An atheist socialist, the intellectual Don Lope hypocritically rationalizes such a transgression as she is still in a better position than she would have been as a homeless orphan fending for her survival.

Tristana resents Don Lope’s control over her: forcing her to become his mistress, restricting her education, etc. She escapes when she falls in love with Horacio (Italian star Franco Nero), a hunky young painter, but eventually is drawn back to her caretaker. In actuality, though, she has shed her innocence, becoming deeply cynical, and has returned to seek revenge.

The program “On Pier Paolo Pasolini” (Dec. 15-29) commemorates what would have been the 90th birthday of Pier Paolo Pasolini (1922-1975), the Italian poet, philosopher, painter, intellectual, novelist, and filmmaker. “Controversial during his lifetime for his dissident views on Italian politics and contemporary culture, he is now recognized as a visionary, a creative thinker whose writings continue to influence European writers, politicians, and intellectuals,” according to the National Gallery. Art historian David Gariff’s illustrated lecture “From Giotto to Pasolini: Narrative in Fresco and Film” (Sat., Dec. 15, 4 p.m.) discusses Pasolini and his work, particularly the influence of Italian Renaissance and Medieval paintings. Screenings include Pasolini’s purported favorite of his films, “Hawks and Sparrows” (Sun., Dec. 16, 4 p.m.), and 1963’s feature essay “La Rabbia: The Rage of Pasolini” (Sat., Dec. 29, 3:30 p.m.), reconstructed to his original vision 30 years after his death by his friend Giuseppe Bertolucci for a 2008 re-release.

Presented in conjunction with the photography exhibition “The Serial Portrait: Photography and Identity in the Last One Hundred Years,” the retrospective “American Originals Now: James Benning” (Dec. 8-9) screens three programs of work by American filmmaker Benning.

The series “From Tinguely to Pipilotti Rist – Swiss Artists on Film” (through Dec. 29), organized in association with the Embassy of Switzerland, concludes its presentation of recent works by Swiss documentary filmmakers.

The Films of Ang Lee

‘Nudes! Guns! Ghosts! The Sensational Cinema of Shintoho’ at Freer

“Werner Schroeter” (through Dec. 17), the retrospective of the influential German alternative filmmaker, continues at the Goethe-Institut on Mondays at 6:30 p.m. with “Willow Springs” (Dec. 3), “Dress Rehearsal” (Dec. 10) and “Smiling Star” (Dec. 17).

Marking the 200th anniversary of the first publication of “Grimm’s Fairy Tales” in 1812, the Hill Center at the Old Naval Hospital — in partnership with the Goethe-Institut — completes the series “Family-Friendly Fairy Tale Films” (through Dec. 9). On Sundays at 2 p.m., kids and adults can catch “Puss in Boots” (Dec. 2) and “The Wishing Table” (Dec. 9), contemporary one-hour versions from ARD, the German public television network.