Home The Washington Diplomat January 2013 Suicide and the Holidays: Myths and Realities 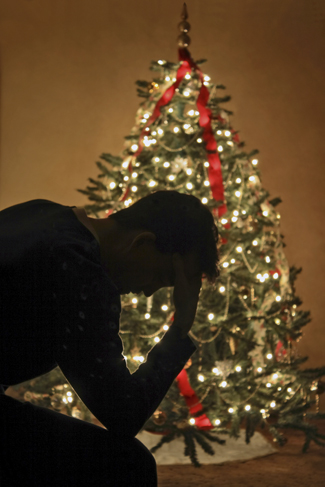 It was a week before Christmas, 2008. I was in the checkout line at Home Goods, gathering a few last-minute holiday tchotchkes, when my husband called on my cell phone. He was crying. “Julie’s dead,” he told me.

Julie was his baby cousin — a teacher, 26 and full of life, with an infectious smile and roomfuls of friends. My husband was the oldest of six cousins who had all grown up together, more like siblings than cousins. Julie was the second youngest. And on that December day, in the house she shared with her older brother and his fiancée, she had killed herself. Five days before Christmas Eve, in a gathering blizzard, the whole family came together, not for a holiday celebration, but for Julie’s funeral.

Stories like Julie’s — a suicide within just a few days of Christmas — may reinforce the idea that suicide rates are higher around the holidays, as people who are already depressed find themselves stressed by holiday pressures and feeling worse about their problems when they see the merriment around them.

But suicide rates don’t peak during November and December, as is commonly thought. In fact, statistics from the U.S. Centers for Disease Control and Prevention show that suicides are near their lowest ebb around the holidays, and actually peak in the spring. (Could this be linked to the phenomenon of increased risk of suicide immediately after going on antidepressants? Perhaps in both cases, a severely depressed person gets just enough energy from medication, or from longer and warmer days, to act on suicidal thoughts that they had been too paralyzed to do anything but think about before.)

Still, the myth of spiking rates of suicide around the holidays persists. Every year, Dan Romer of the Annenberg Public Policy Center tracks media coverage of this notion and releases a report comparing the percentage of stories that debunk the myth with those that support it. His report for 2012 isn’t out yet as of this writing, but in 2011, 70 percent of the stories related to holiday suicides gave credence to the myth. Only 30 percent set the record straight.

What’s the big deal? After all, raising awareness about suicide is probably a good thing even if the numbers and dates aren’t exactly accurate, right? Not necessarily. “The problem with reinforcing the myth is that media content that makes suicide appear to be more common can encourage vulnerable individuals to consider it,” Romer said in a statement released with last year’s data. “Although we have no direct evidence for such an effect of the holiday myth, other evidence indicates that the media can influence vulnerable people to attempt suicide.”

The myth of “holiday blues” suicides can also inadvertently diminish the reality of the kind of depression that leads someone to kill him or herself. Passing cases of the “holiday blues” don’t drive people to commit suicide — real, lasting, often untreated and unacknowledged struggles with depression and other related types of mental illness do.

Instead of focusing on the idea that people are more likely to kill themselves around the holidays, experts say it’s important to be aware of the signs that someone is at risk for suicide throughout the year. According to the American Foundation for Suicide Prevention (AFSP), these signs include:

– Clear signs of serious depression, such as an unrelenting low mood, hopelessness and desperation

– Withdrawal from friends, family and activities

– Increased use of alcohol and/or drugs

– Making a plan or taking steps toward suicide, such as giving away favorite possessions, getting a gun or hoarding medications

More than half of all people who commit suicide make their plans known to someone around them. If you happen to be that someone, don’t shrug it off. Tell them you’re concerned. Ask if they have a therapist. Encourage them to seek professional help (find out more at AFSP.org). If you think they’re at immediate risk of harming themselves, don’t leave the person alone. Get them to an emergency room or walk-in psychiatric clinic, or even just a doctor’s office; or call 911 or the National Suicide Prevention Lifeline at 1-800-273-TALK (8255).

There’s one thing about holidays and suicide that isn’t a myth, though: Holidays, anniversaries and birthdays are acutely painful for all survivors of suicide, no matter what time of year the death occurred. Some families prefer to maintain old traditions, while others want to create new ones — some involving rituals in celebration of the life of their loved one.

My husband’s aunt’s family goes on a pre-Christmas cruise together so that they will all be together in a bright, happy place during the actual anniversary of Julie’s death. Another family goes to Disney for the holidays after losing their 21-year-old son to suicide. A woman whose husband killed himself after 32 years of marriage told the AFSP that she writes him a note each year about what’s happened in her life and puts it in his Christmas stocking. Yet another woman gets the ugliest tree she can find, to make herself remember her husband’s great sense of humor.

The AFSP notes that there is no “right way” to handle the holidays after losing someone to suicide. If you’ve lost someone to suicide — this year or any year in the past — be gentle with yourself this holiday season and don’t be afraid yourself to ask for help.