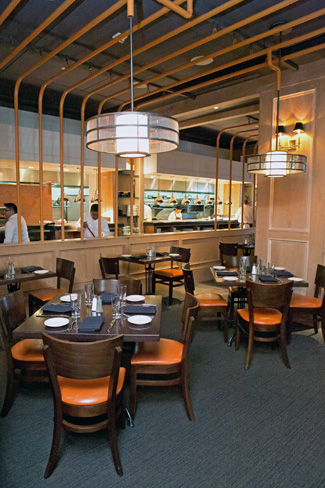 Woodward Table, housed in the historic Woodward Building just a block from the White House, is more casual than chef Jeffrey Buben’s two other well-known restaurants.

For almost two decades, chef Jeffrey Buben has helped shape the D.C. dining scene. With the opening of Vidalia, his lauded Southern-infused modern American restaurant in 1993, Buben set a high standard early on for fine dining in the District.

With an almost obsessive reputation for quality, Buben led Vidalia from one accolade to another, garnering practically every major culinary award the area has to offer. Following on Vidalia’s success, Buben opened Bistro Bis in 1998 to almost equal acclaim. Located in the Hotel George, the contemporary French restaurant quickly became a Capitol Hill fixture. For the next 15 years, Buben and his staff turned in consistently superior performances at both locations, along the way training several young chefs who went on to make names for themselves, including Peter Smith of PS 7’s, Eric Ziebold of CityZen, and R.J. Cooper of Rogue 24.

However, unlike many other notable D.C. chefs, Buben did not open up a spate of new restaurants — until now. The sudden closing of Potenza earlier this year presented Buben with the opportunity to open a new restaurant in an iconic downtown location. Located on the ground floor of the historic Woodward Building just a block from the White House, Buben’s Woodward Table actually encompasses three different dining experiences: a formal dining room; a bar and lounge; and Woodward Takeaway Food, a casual takeaway spot deliberately known by the somewhat unfortunate acronym WTF.

While Vidalia is coolly elegant with its palette of magnolia and onionskin, and Bistro Bis almost cavernous with its high ceilings and strong vertical elements, Buben has opted for a warmer feel for Woodward Table. In redoing the space, he replaced Potenza’s dark woods and eclectic Italian touches with lighter colors and fewer decorative accents. The pumpkin, chocolate, and cream color scheme in the dining room is complemented by pale wood paneling, strong lines in the floor-to-ceiling copper piping, modern light fixtures, and whimsical dining-related murals that create an appealing, airy, contemporary feel.

On the WTF side, white stone tile countertops and bold red flourishes create an almost fast-food like casualness — almost. WTF’s mission is to offer individually prepared, artisanal meals for breakfast, lunch and takeout at a routinely affordable price. 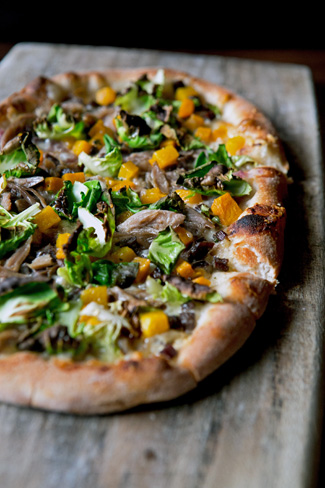 Woodward Table offers a menu of American cuisine derived from iconic dishes with a seasonal emphasis.

Buben tapped chef Joe Harran, who has served in Buben’s other two kitchens, to lead Woodward Table. Designing the new venture to be more causal than his other two restaurants, Buben turned to domestic sources for inspiration. He characterizes Woodward Table’s menu as American cuisine derived from iconic dishes with a seasonal emphasis. The menu abounds with straightforward classics — steak, chops, brisket, crab cake, lobster — bearing a slight resemblance to Vidalia, though there is no Southern flair here.

For example, shrimp and grits, available as a starter, feature creamed Anson Mills grits and Tasso ham, but Woodward Table takes the signature dish up a notch by barbequing the shrimp and serving it with smoked paprika butter for an unusual effect. The ribs at Woodward, served as an appetizer, are comprised of lamb seasoned with garlic, cilantro and toasted pumpkin seed, which introduces an almost Native Mesoamerican dimension to the dish.

Buben in fact borrows from different cuisines and techniques to create contrasts that capitalize on the flavors of the season. The current trout dish, for instance, is pan roasted and dished up with trumpet mushrooms, Brussels sprouts, sweet potatoes and sage butter. The flavors are pure and intense. Likewise, meaty pan-seared sea scallops partner well with smooth kabocha squash purée, crunchy spiced pumpkin seeds and grainy compressed pears — punctuated by a splash of sherry. The grilled New York strip steak — prepared simply with cipollini onions, wild mushrooms and pommery mustard — is superb, though the delicate flavor of the tender, perfectly cooked duroc pork chop is almost overwhelmed by the grits, braised greens and rye jus with which it is paired. Vidalia fans will recognize the crab cakes at Woodward Table, but with fennel salad, crab-spiced mini potatoes and pommery mustard butter, the effect is less Louisiana.

With this emphasis on seasonality, Woodland Table is full of gustatory surprises. A skin-on filet of Arctic char is pan seared and accompanied with wilted greens, potato gnocchi dressed in a brown butter emulsion and, in a nod to fall vegetables, tender chunks of rutabaga. What a pleasure to find the lowly and much-neglected turnip given such a place of honor. Meanwhile, roasted winter squash is transformed in a side dish thanks to the addition of pecans, sage and maple butter. Even cauliflower stands out as a side, with the tiny florets caramelized and mixed with honey-roasted nuts and cranberries.

Buben hung onto the pizza oven that had been a central feature of Potenza’s kitchen. As a result, chef Harran is turning out some tasty flatbreads that are available in the dining room, bar and at WTF next door. Thin, chewy crusts are crowned with just a smattering of toppings in some fascinating combinations that reflect the omnipresent seasonal theme. Duck confit, butternut squash, Brussels sprouts, manchego cheese, garlic, and sage pair up in a festive flatbread that toasts the holidays. For salt lovers, the Benton’s own flatbread, with smoked ham hock, country ham, bacon marmalade and cheddar cheese, is a hearty choice. A third version, with wild mushroom, garlic confit, creamed spinach and fontina cheese, is deliciously rich yet mild. 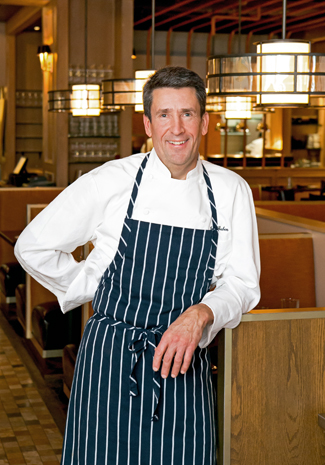 With his restaurants Vidalia and Bistro Bis, chef Jeffrey Buben has garnered practically every major culinary award the area has to offer.

Buben rounds out the menu at Woodward Table with an impressive selection of desserts. Like the entrées, the desserts stand out because of their innovative pairing of ingredients. A homey, hearth-baked, spiced carrot bread pudding is set off with pineapple and candied walnuts, along with a surprising dollop of blood orange-buttermilk ice cream that perfectly balances the dense, rich pudding. A tart of caramel pears in crisp pastry is served with blue cheese ice cream (better than it sounds) and sea salt-caramel sauce. This salty sweet combination is as unusual as some of the entrées, and just as satisfying. An apple sampler features a tiny apple cupcake and apple upside-down tart paired with an icy cider sorbet and smooth white chocolate apple mousse — demonstrating just how versatile both the fruit and the pastry chef are.

A more conventional dessert that will satisfy even the strongest chocolate cravings is the chocolate hazelnut layer cake, a cocoa-glazed flourless cake sandwiching bitter chocolate ganache and drizzled with dark chocolate sauce — just to make sure you get the point. For those who prefer citrus, the Meyer lemon cheesecake, served with tiny cubes of coconut-rum pound cake, berry coulis and lemon-rosemary marmalade, is light and airy with no hint of tart aftertaste.

The favorite choice, however, has been the coffee and cream dessert. It’s a heavenly combination of mocha mousse, almond chocolate crumble, coffee toffee and cappuccino cream that eliminates the need for any post-meal cup of coffee. However, the maple espresso might just be worth one more jolt of caffeine.

With a 38-foot bar and plenty of booth, bar table and lounge seating, Woodward Table is a nice spot for happy hour. Picture windows overlooking H Street and big-screen TVs offer patrons an alternative to conversation, and house cocktails like the honey delight — a concoction of Dancing Pines Bourbon, honey syrup, citrus and pineapple — are tasty liquid distractions. A reasonable selection of wines and beers on tap and a separate bar menu make the lounge a destination in its own right.

Despite the fact that it’s only been open a short while, Woodward Table already bears some of the hallmarks of a Buben establishment. He gave his existing staff a chance to switch gears and work at his new restaurant, and the service at Woodward Table demonstrates just how effective Buben’s establishments have been as training grounds. The wait staff has been excellent in several visits and the staging from the kitchen flawless. Only the front desk seems not consistently up to Buben standards.

While it’s been a long time coming, this newest addition to the Buben brood is a welcome one. If these early days are an indication of things to come, Woodward Table could be well be the precocious youngster one would expect from the creator of Vidalia and Bistro Bis.