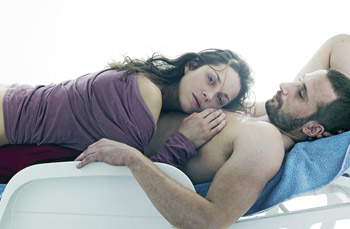 “Rust and Bone” exemplifies Audiard’s tendency to combine harsh realism with a hyperbolic sense of post-romanticism in which criminal elements become heroic figures in stark, devastating environments. It’s not as tight and gritty as “A Prophet,” but that doesn’t prevent Audiard’s latest film from succeeding in a more kinetic fashion. It’s like neorealism for the age of music videos. Somehow, it works far better than it sounds.

Ali (Matthias Schoenaerts) has just gained custody of his 5-year-old boy Sam (Armand Verdure). Homeless, broke and hungry, they take the train to Antibes in the South of France to find refuge with Ali’s sister, Anna (Corinne Masiero), a reluctant hostess. Ali picks up a gig as a bouncer, working at a club where he meets and protects bloodied Stéphanie (Marion Cotillard) when a fight breaks out. Ali proclaims she looks like a hooker wearing her revealing miniskirt, which angers her. He learns that when the carefree beauty isn’t dancing in her nightlife, she diligently works by day as a capable, forceful orca whale trainer.

Shortly thereafter, Stéphanie is badly injured in a freakish work accident in which she loses her legs. She calls Ali for assistance, triggering an improbable love affair marked by intense emotional and physical peaks. Stéphanie strives to recover from her debilitating injuries and resume her life, which she does relatively well. Yet even fitted with prosthetic legs, she still cannot bear to get back onto the dance floor. Meanwhile, Ali has become a bare-knuckle street boxer involved with a dangerous gambling fight crowd. He finds it tougher and tougher to stabilize his precarious financial and paternal situation.

An entrancing no-holds-barred performance by French actress Cotillard (Oscar winner for “La Vie en Rose,” “The Dark Knight Rises”), perhaps her best turn ever, certainly brings “Rust and Bone” to life. She manages to fully express a wide range of emotional states from very fragile to extremely tough. The viewers simply can’t keep their eyes away from her. Ditto for her character’s love interest, a sullen hunk played by Schoenaerts whom the audience hates to like. Both performances are prevented from becoming oversimplified clichés because their characters don’t externalize all their feelings to show the public; they keep plenty internalized within.

On the contrary, Audiard is known for his stylish, over-the-top direction (“The Beat That My Heart Skipped,” “Read My Lips”). Going over the top is a dangerous dance, but Audiard knows how to bring it, though maybe it’s not the taste of every viewer. Director of photography Stéphane Fontaine, a regular collaborator, does his bit to translate the script’s text into dazzling images on screen. The action is pushed along by a haunting soundtrack featuring Bon Iver and Lykke Li, with a score by Alexandre Desplat. 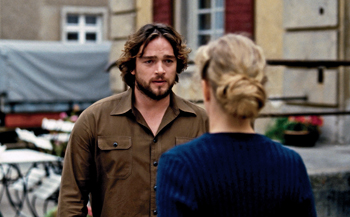 In 1980, beautiful young East German physician Barbara Wolff (Hoss), a rising star, applies for an exit visa to leave for the West. As punishment, she’s transferred from her distinguished Berlin appointment to a lesser job at a modest, rural children’s hospital. Upon her arrival, Barbara already does not appear to quite fit in. Coming from Berlin, she’s perfectly dressed and well-coiffed, reinforcing her striking poise.

She aims to maintain a cool demeanor as a means of self-preservation in a place where she knows nobody. Really, she can trust no one in a country full of Stasi officers and collaborators constantly watching her. Yet subtle bits reveal she’s not as unwavering as she’d like to be. Very slowly over time, the ice princess persona melts a bit.

Without reservation, she opens her heart to become completely dedicated to the care of her patients, gaining approval from her colleagues. She maintains her distance from others, intending to keep focused on her scheme to save money to escape to the West with her lover. She initially rebuffs friendly gestures from André (Ronald Zehrfeld), a fellow talented young doctor who’s also handsome, soft-spoken and ambitious. As she learns of their shared interests, she eventually warms up to him, developing a dangerous attraction despite her better judgment.

Unlike other Cold War movies set behind the Iron Curtain, the setting of “Barbara” is not depicted as a completely terrible, dreadful place. In fact, director of photography Hans Fromm portrays East Germany as rather attractive, at least at first glance. Yet from the beginning, Petzold crafts a growing nervous tension that becomes clearly evident just below the surface of the authoritarian communist state. The pervasive lack of trust is accentuated by a notable sense of separation, amplified by the camera largely avoiding close-ups to keep a marked distance from its subjects.

The director brings out appropriately soft performances, all the more powerful for not being over the top, from his quietly competent ensemble cast. That being said, “Barbara” is largely a character study of its eponymous character. Playing Barbara, Hoss appears in nearly every scene, demanding a lot from the actress. Fortunately, her magnetic presence enables her to memorably dominate the screen. 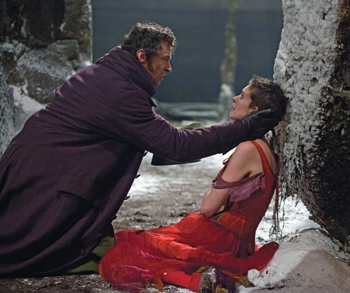 In the latest incarnation of the beloved story “Les Misérables,” British director Tom Hooper (Academy Award-winning director of “The King’s Speech”) brings to the big screen a crowd-pleasing movie version of British theater producer Cameron Mackintosh’s blockbuster musical, itself based on the classic novel by French author Victor Hugo. Now in its 27th year, the longest-running stage musical in the world has been attended by more than 60 million people in 42 countries (and in 21 languages).

Hooper certainly has big shoes to fill, which he does admirably. His lively direction manages to keep the film from seeming too stagey, a fatal flaw of many movies based on plays.

In 19th-century France, police Inspector Javert has spent years doggedly chasing the runaway convict Jean Valjean. The escapee broke his parole after his release from a Toulouse prison, where he served 19 years for stealing bread and failed escape attempts. Valjean seeks a normal life, even becoming mayor of a town in France. He agrees to take in and raise Cosette, the illegitimate daughter of the tragic heroine Fantine, an impoverished factory worker forced into prostitution. In 1932, Valjean ends up thrust into the June Rebellion in Paris. While Javert’s obsessive pursuit of Valjean has completely dominated both their lives for two decades, the country of France is undergoing revolution.

The cinematic vitality of Hooper’s direction is enhanced by solid technical credits, as well as William Nicholson’s succinct screenplay that was adroitly adapted from the stage musical’s book by Alain Boublil and Claude-Michel Schönberg with lyrics by Herbert Kretzmer, keeping its essence intact while translating the story to a cinematic form fully suitable for the movie screen. From a music standpoint, the film does justice to familiar songs from the stage musical such as “Bring Him Home” and “I Dreamed a Dream.” Jackman also stirringly performs “Suddenly,” a new original song written for the film.

The WJFF Centerpiece Evening at the Avalon Theatre boasts the mid-Atlantic premiere of the eccentric comedy “Dorfman” (Tue., Jan. 8, 8:30 p.m.) with a live appearance by American movie star Elliot Gould, who plays Deb Dorfman’s dad. Gould will begin the night by looking back at his lifetime body of work as an actor (which includes “Bob & Carol & Ted & Alice,” “”MASH” and “Nashville”). After “Dorfman” unspools, Gould, screenwriter Wendy Kout and producer Len Hill will chat about their award-winning indie hit with the audience.

The WJFF Visionary Award Presentation at the DCJCC (Mon., Jan. 7, 8 p.m.) recognizes the trailblazing achievements in the Israeli film industry by Noemi Schory and Katriel Schory. The night’s program will examine their distinguished careers on stage before an awards ceremony, culminating with the U.S. premiere of Noemi’s 2003 documentary “Slaves of the Sword: Yitzhak Rabin.” The next day, her 1991 doc “Born in Berlin” makes its mid-Atlantic premiere at the Goethe-Institut (Tue., Jan. 8, 7 p.m.), where both WJFF Visionary Award winners are expected to attend.

On closing night at the DCJCC, the festival winds down with the D.C. premiere of American director Roberta Grossman’s documentary “Hava Nagila (The Movie)” (Sun., Jan. 13, 7:30 p.m.), followed by a reception. The film, which traces the classic Jewish song’s path originating in Eastern Europe, is also honored as the JCC of Greater Washington Centennial Birthday Party Kick-Off Screening (Sun., Jan. 6, 1 p.m.).

“The Military Eye” concludes with German filmmaker Harun Farocki’s 1989 “Images of the World and the Inscription of War” (Sun., Jan. 13, 2 p.m.), which muses on the photos of the Auschwitz concentration camp accidentally snapped by World War II American spy planes and subsequently forgotten as non-military targets. After Farocki’s film essay finishes, a panel discourse is moderated by Thomas Y. Levin of Princeton University and curator of the exhibit “CTRL [SPACE], Rhetorics of Surveillance from Bentham to Big Brother.”