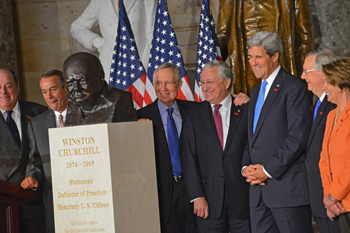 Last month, as U.S. senators kicked back on the first day of their month-long summer recess, there was no break from the relentless spate of crises around the world. But as a result of the Senate’s failure to confirm dozens of diplomatic nominees, many American embassies abroad carried on without ambassadors, hardly inspiring confidence that Washington is ready to tackle the foreign policy challenges of the day.

This backlog in confirmations is the result of longstanding partisan battles that came to a head last November, when Senate Democrats triggered the “nuclear option” and eliminated filibusters for presidential nominees in the hopes that it would speed up a politicized confirmation process. However, the move to streamline judicial nominees seems to have had the reverse effect on diplomatic ones: In retaliation, Senate Republicans have, with some exceptions, failed to provide the unanimous consent that is required to confirm ambassadorial nominees in bulk. Republicans say the Democrats have only themselves to blame for the impasse, as they were the ones who detonated the nuclear option.

A rare moment of unity on the Hill: Secretary of State John Kerry, third from right, poses with Senate and House leaders at the dedication of a bust of Winston Churchill at the U.S. Capitol last year. Over the summer, Kerry repeatedly warned that a quarter of U.S. ambassadorships abroad remain vacant due to partisan bickering and obstructionism in the Senate.

The standoff has left over 40 presidential nominees — more than half of whom are noncontroversial career diplomats — twiddling their thumbs as they wait for the go-ahead to assume their posts. The Senate did confirm Ambassador John Tefft to Russia in its final legislative session before recess; earlier it had also approved envoys to critical Mideast nations such as Iraq, Qatar and Kuwait, as well as Egypt. Everyone else, it seems, will simply have to wait — that includes envoys to important allies such as Turkey, France and South Korea.

Some have already been waiting for nearly a year — even after making it out of the Senate Foreign Relations Committee with overwhelming bipartisan support. And the wait may not be over: When lawmakers return from summer recess this month, they only have a brief legislative window and an already packed schedule before the November elections.

Sen. Robert Menendez (D-N.J.), chairman of the Foreign Relations Committee, was one of the first to speak out about the logjam. On July 31, during that final session before the recess, he called for his colleagues to put partisan animosity aside in the interest of American diplomacy.

“Our career Foreign Service officers serve Democratic and Republican presidents, and they should not — they must not — be treated as political pawns,” Menendez said on the Senate floor. “[T]he Senate standoff that has left so many career Foreign Service nominees in political and personal limbo is damaging our credibility, undermining our national security, and it must end now.”

The Senate pushed through Tefft’s nomination, but ignored Menendez’s pleas to take up another two-dozen nominees. Weeks before leaving, though, the chamber did confirm a string of appointments to key countries. But Menendez emphasized that nominees should not only be confirmed in a crisis, as was the case with Tefft, who will take up his post in Russia in a period of renewed tensions over Ukraine.

“Confirmation by crisis is not a strategy and not in the national security interest of the United States,” Menendez said. “No nation can listen to us if we are not present to speak.”

Of course, an American mission abroad is not entirely incapacitated in the absence of an ambassador: The embassies are staffed with mid- to senior-level employees and, until an ambassador arrives, they are headed by chargé d’affaires.

However, a chargé is not ranked as highly as an ambassador, nor is he or she appointed by the president; as a result, this second-in-command might find it difficult to engage with foreign governments at the highest levels.

“A chargé d’affaires is certainly recognized by the governments abroad, as well as the U.S., as having the authority to represent the United States, but it isn’t the same position,” said Edward Gnehm Jr., a former U.S. ambassador to Jordan, Australia and Kuwait who is now a professor at the George Washington University’s Elliott School of International Affairs.

“In some countries, we may have some very important interests, some very important issues at play and at stake. The ambassador is going to be able to get in at the highest levels of government … a chargé may not be able to,” Gnehm told The Diplomat. “They will be shunted to deputies. Now, that’s not always true, but it is a real possibility.”

To be fair, not all of the pending nominees are respected career professionals like Gnehm — many are political appointees who were chosen for their sheer ability to raise campaign money. Like his predecessors, President Obama has tapped a slew of political bundlers to serve in plum postings such as France and Britain. Not all have stellar credentials — one is a soap opera producer who is being sent to Hungry, at a time when the country is experiencing a rise in far-right nationalism, and another is being sent to Argentina but doesn’t speak Spanish. Obama’s proposed ambassador to Norway, businessman and fundraiser George Tsunis, famously fumbled at his confirmation hearing, where he appeared clueless about Norway’s political system after being grilled by Sen. John McCain (R-Ariz.). 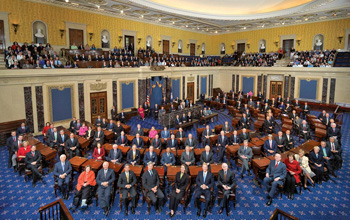 The 111th Senate poses for a group photo. The upper chamber is responsible for confirming the appointments of all federal judges, military officers and ambassadors, among others.

Of course, not all businessmen lack international experience, and political appointees have their advantages in that many are close to the president and can be good managers.

But whether political or professional, an ambassador remains an important symbol of recognition, and not having one can be viewed as a diplomatic slight.

Secretary of State John Kerry has warned that the U.S. is “going without our strongest voice on the ground every day in more than 25 percent of the world” — at a time when crises are piling up and perceptions matter.

“Make no mistake: Vacancies in so many world capitals send a dangerous message to allies and adversaries alike about America’s engagement,” Kerry warned in a July 8 Politico op-ed. “This perception makes it much more difficult to do the nonpartisan work at the heart of U.S. foreign policy — defending the security of our nation, promoting our values and helping our businesses compete to create American jobs back home.”

The lengthy wait times have only reinforced the impression that some countries just aren’t important enough to warrant an ambassador.

Former Assistant Secretary of State for Public Affairs P.J. Crowley explained that while countries understand there can be gaps between one ambassador’s departure and another’s confirmation, they are less understanding of gaps that last for months on end.

“At home, we understand it is just politics. But overseas, rightly or wrongly, a country without a U.S. ambassador for an extended period can interpret an extensive gap as an indication that their relationship with the United States is not a priority,” Crowley told The Diplomat. “It creates an unforced error that the new ambassador, once confirmed, has to work to overcome.”

Even in countries where the U.S. has strong ties, Gnehm said, such a long wait can be interpreted as a snub.

“Countries get very angry and very incensed. They’re actually very sensitive,” he said. “Even in countries where our relationships are very good and there are really no major problems, they take umbrage with the fact that we don’t have an ambassador there.”

The inefficient process can also make the U.S. appear weak, suggesting its political parties are so at odds that they cannot complete the simple task of a voice vote that would confirm dozens of nominees at once.

“All of a sudden, people see that America is polarized,” Crowley said. “[The bottleneck] is not solving problems. It is doing the opposite. That carries reputational risk that can have broader policy implications if not reversed.”

Indeed, it seems the backlog is costing Americans, and not just in lost prestige. Gnehm pointed out that between a career diplomat’s nomination and confirmation, he or she must still be paid, regardless of the wait. Furthermore, the failure of the Senate to confirm a Foreign Service Director General, who is responsible for personnel for the entire State Department, is likely to lead to further inefficiencies within the department itself.

“This is a gross misuse of assets and resources,” said Gnehm, who served as Director General of the Foreign Service in the late 1990s. “Why would you cripple an entire department for partisan politics, particularly when you’ve got U.S. national interests at stake?”

Politically motivated delays, of course, are nothing new. Senators often put holds on nominees, even for completely unrelated policy reasons — a time-honored tradition employed by both sides of the aisle. But Menendez says he’s never seen anything like this before.

“Never, to my knowledge, has this body, as a political strategy, obstructed — en masse — the appointments of noncontroversial career Foreign Service officers who have worked for both Democratic and Republican administrations,” he said in June.

Crowley agrees the blocking is rather unprecedented. “There is an old saying that when it comes to national security, politics should stop at the water’s edge,” he said. “The truth is politics has never stopped at the water’s edge, but there has to be recognition when our politics goes so far that it damages our relations with key countries and allies around the world. We are at that point.”