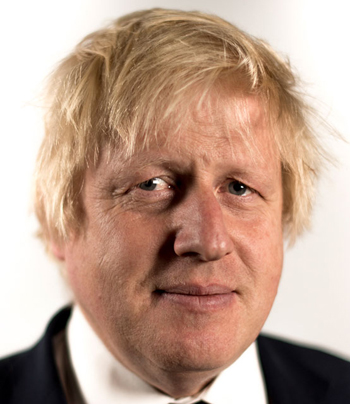 He’s been called the eccentric, zip-lining, American-born politician who was briefly the odds-on favorite to take over as prime minister after David Cameron left office in ignominy. French Foreign Minister Jean-Marc Ayrault called him a liar. German Foreign Minister Frank-Walter Steinmeier said his behavior was outrageous. The Hindustan Times called him a racist and the Economist said he is “unscrupulous, unserious and poorly organized.”

Labour Party MP David Lammy tweeted his reaction to the announcement by new Prime Minister Theresa May that Boris would be the country’s top diplomat: “Is this a bad dream? An elaborate wind up? Please God help us.”

In a headline in the Guardian newspaper, Sonia Purnell, author of “Just Boris: A Tale of Blond Ambition,” wrote: “Never have we needed diplomacy more. Instead we have Boris Johnson.”

Indeed, Johnson is an odd choice to be Britain’s top diplomat. When she chose him, May must have forgotten the limerick Johnson penned about Turkish President Recep Tayyip Erdogan involving a goat and sexual congress.

She must have overlooked the time Johnson likened Democratic presidential nominee Hillary Clinton to “a sadistic nurse in a mental hospital” and said President Barack Obama held a grudge against the U.K. because of his Kenyan ancestry. Of Bill Clinton, Johnson was a bit more flattering, once saying: “If Bill can deal with Hillary, he can surely deal with any global crisis.”

After Republican presumptive nominee Donald Trump said radicalization had made parts of London no-go areas, Johnson responded by saying: “The only reason I wouldn’t visit some parts of New York is the real risk of meeting Donald Trump.”

That risk may become all too real if Trump — another populist and entertainer in the vein of Johnson — wins the White House.

Both men share a penchant for hyperbole and historic inaccuracy. In 2003, Johnson offended Africans when he said: “The Queen has come to love the Commonwealth, partly because it supplies her with regular cheering crowds of flag-waving piccaninnies.”

During campaigning for the referendum, Johnson likened the EU to Hitler’s Europe.

“Napoleon, Hitler, various people tried this out, and it ends tragically. The EU is an attempt to do this by different methods.”

He has said the EU is “in many ways corrupt” and, separately, that it imposed too many rules and regulations on the U.K. “First, they make us pay in our taxes for Greek olive groves, many of which probably don’t exist. Then they say we can’t dip our bread in olive oil in restaurants. We didn’t join the common market — betraying the New Zealanders and their butter — in order to be told when, where and how we must eat the olive oil we have been forced to subsidize.”

Johnson was born in New York, but moved back to the U.K. when he was 5. He renounced his U.S. citizenship in 2015 after American tax authorities ordered him to pay six figures in capital gains tax following the highly profitable sale of his London home. (Britons do not pay capital gains tax on the sale of their principal residence.)

Johnson eventually paid up but in an apparently retaliatory move was said to be seeking 8 million pounds from the U.S. Embassy in London for unpaid congestion charges — a daily “toll” for driving through parts of central London between the hours of 7 a.m. and 6 p.m.

So why would May make such an unorthodox choice? Some speculate the shrewd prime minister may be looking for a scapegoat should negotiations with the EU flounder.

But Johnson’s supporters counter that he was an effective mayor who can inject much-needed adrenaline into a stale diplomatic system.

Ironically, making his debut last month on the international stage, Johnson changed his bombastic tune. Unlike his earlier comments comparing the EU to Hitler, he took a more conventional approach, telling the bloc’s foreign ministers that Britain is not abandoning its “friends.”