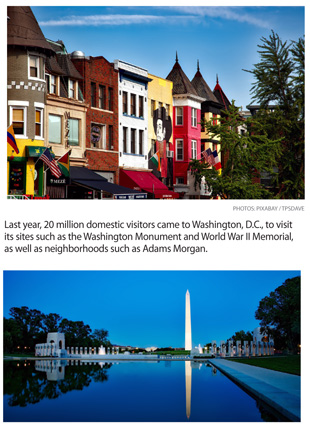 In 2016, Washington broke domestic visitor records for the seventh straight year, with 20 million people coming nationwide to the capital — and spending a record $7.3 billion while they were here.

For comparison, the number of domestic visitors increased by 700,000, or 3.6 percent, over 2015, according to a new report by DK Shifflet and Associates, a tourism and travel industry research firm. And the spending marked an increase of 2.8 percent over 2015, according to IHS Markit, an analytics company. It’s only the second time that the number has passed the $7 billion mark.

“The increase is driven by the combination of the city’s long-standing reputation for free experiences like national monuments and federal museums and the acknowledgement that our neighborhoods are rich with excellent restaurants and unique nightlife, theater and retail,” Elliott Ferguson, president and chief executive officer of Destination DC, the District’s marketing office, said in an email. “Permanent new additions to the city like the Michelin guide and the National Museum of African American History and Culture inspire visitation.”

Here’s where visitors spent more money than they did in 2015:

Visitors represented a mix of leisure and business travelers. About 8.4 million fell into the latter category last year, up 1.3 percent from 2015. D.C. is a destination that’s both “a necessary place for business and a must-experience leisure destination,” Ferguson said. “Increased hotel inventory, especially the addition of the Marriott Marquis Washington DC allows the Walter E. Washington [Convention Center] to host two citywide conventions at once.”

What’s more, D.C. is growing beyond its traditional attractions — politics and history — to include new descriptions, including “fittest city in the country” for six of the past 10 years, according to the American College of Sports Medicine’s American Fitness Index. It’s also increasingly being praised as a foodie playground. For example, Bon Appétit magazine named D.C. its “Restaurant City of the Year” in 2016, and 12 restaurants earned Michelin star ratings.

Additional enticements that officials are tweaking to further increase visitation include the Entertainment and Sports Arena in Congress Heights, the RFK campus and reactivating the Walter E. Washington Convention Center streetscape, Gregory A. O’Dell, president and CEO of Events DC, said in a press release.

“We want people to embrace the familiar and explore the unfamiliar too,” Ferguson said.

The travel and tourism industry is crucial to D.C.’s economy. The hospitality sector sustains more than 74,654 jobs in the District, and that number is expected to grow. In June, D.C. hosted IPW 2017, the travel industry’s premier international marketplace and the largest generator of travel to the United States. As a result of hosting this event, the District could get another 1 million international visitors in the next three years, according to Destination DC. They are expected to create $1.7 billion in economic impact, generate $84 million in local taxes and directly support 5,300 jobs, according to Rockport Analytics.