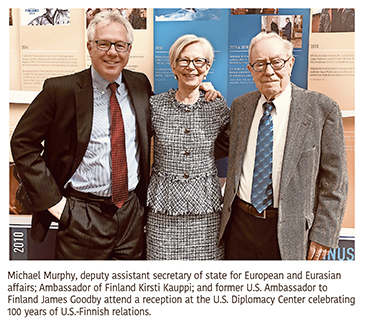 It’s been centennial overload for Finland recently. In 2017, the country celebrated its 100th anniversary of independence. And this year, it’s commemorating 100 years of relations with the United States.

To mark the occasion, the Finnish Embassy teamed up with the State Department’s Bureau of European and Eurasian Affairs to host an exhibition at the U.S. Diplomacy Center chronicling major milestones in the 100-year relationship.

“One hundred years ago today on May 7, 1919, the United States recognized Finland in a letter from Secretary of State Robert Lansing to Foreign Minister Rudolf Holsti,” said Michael Murphy, deputy assistant secretary of state for European and Eurasian affairs.

Murphy spoke to a small audience, including Finnish Ambassador Kirsti Kauppi and former U.S. Ambassador to Finland James Goodby, gathered at the U.S. Diplomacy Center, a sleek, sunlight-bathed museum next to the State Department that is dedicated to the history and challenges of American diplomacy.

“Our two nations shared many great moments over the past 100 years,” Murphy, a 27-year veteran of the U.S. Foreign Service, said, adding that Finland and the U.S. have contributed to “growing peace, prosperity and security for our peoples” and “expanded personal freedoms and promoted democratic values across the globe.”

Murphy noted that over 750 Finnish students study at U.S. universities, while more than 450 American students attend Finnish universities. In addition, 200,000 Finns visit the U.S. each year, while about 230,000 Americans travel to Finland. And roughly 700,000 Americans trace their ancestry to this Nordic nation of just over 5 million.

On the economic front, Finnish foreign direct investment to the U.S. totals $13.3 billion and Finnish-owned companies employ nearly 30,000 people in the United States.

On the security front, Murphy praised Finland’s support of NATO and its hosting of the European Center of Excellence for Countering Hybrid Threats.

Of course, Finland’s connections to the U.S. go far beyond politics. The Finns have left an indelible mark on something many Americans hold near and dear to their hearts: their sports teams.

Nearly a dozen Finnish hockey players have won Stanley Cup titles, and Finland has produced more NHL goaltenders than any other European nation.

Finnish sports have been influenced by Americans as well. Pesäpallo, for example, is a fast-moving bat-and-ball sport that is modeled after American baseball and is considered Finland’s national pastime.

“Our sports teams are better thanks to Finns and not just in hockey,” Murphy said. “Finnish basketball star Lauri Markkanen is doing a great job with the Chicago Bulls and teaching his teammates Finnish while he is at it.

“And, of course, Finland gave us the word ‘sauna,’” Murphy added. “I have it on good authority that an induction into the ‘Diplomatic Sauna Society’ at the Finnish Embassy is one of the hottest tickets in Washington, D.C. — and I stand ready to receive my invitation at any time.”