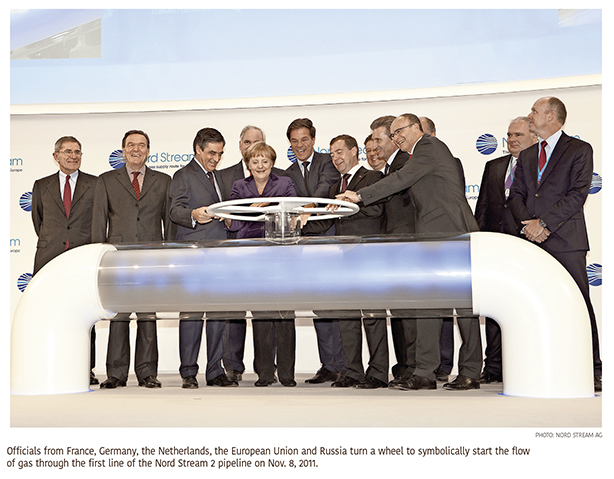 The United States and Russia are locked in an economic and geopolitical power struggle over which of them will be Western Europe’s principal supplier of natural gas.

Gazprom, a government-backed energy conglomerate, expects to finish building a second natural gas pipeline from Russia to Germany by the end of 2019 (although the project could be delayed until 2020).

U.S. senators and House members from both parties have introduced legislation they hope will thwart completion of the pipeline, called Nord Stream 2.

Supporters, including President Trump, say the pipeline would make Germany — and by extension Europe — overly dependent on Russia for natural gas and that Russia might use Nord Stream 2 as a political weapon by opening and closing the tap as it sees fit, as it has done before.

Hoping to keep that from happening, Trump said on June 12 that he might impose economic sanctions on Germany.

The pipeline “really makes Germany a hostage of Russia if things ever happened that were bad,” Trump told reporters at the White House.

Matthias Wehler, a spokesman for the German Embassy in Washington, tried to distance his government from the pipeline project.

But Germany, Russia’s largest buyer of natural gas, would certainly be one of the largest beneficiaries of the €9.5 billion project, which would double the amount of cheap shipped directly to the country just as the government is working to wean itself off coal and nuclear energy.

By shipping the gas via the Baltic Sea, Nord Stream 2 also bypasses Ukraine, robbing the country of lucrative transit fees. That’s a huge plus for Russia, which would have a more reliable route to increase Europe’s supply of cheap Russian gas, helping the continent meet rising demand. It also appeals to some Western European governments because they would not be held hostage by disputes between Russia and Ukraine.

But many Eastern European nations worry Nord Stream 2 will increase their reliance on Russia at a time of increasing tensions between the West and Moscow.

U.S. officials agree, arguing that the project is not in keeping with the European Union’s policy of energy security and supply diversification. They want the EU to buy more natural gas from the United States, which is the world’s largest producer of it. Russia is the second-largest producer, but the largest exporter, owing to its extensive network of pipelines.

Another motivation for the United States is that China, the world’s largest gas importer, imposed a 25 percent tariff on U.S. liquefied natural gas imports on June 1 in response to Trump’s tariffs. Those imports have all but stopped as a result. 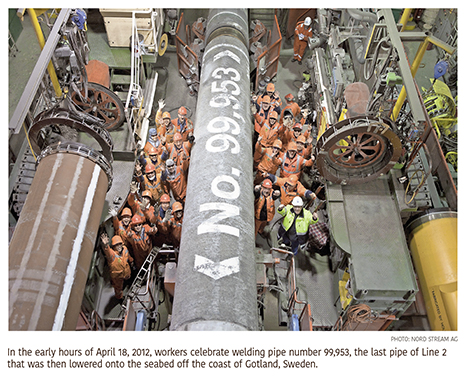 Leading the charge in the Senate are Republican Sen. Ted Cruz, whose home state of Texas is the leading producer of U.S. natural gas, and Democratic Sen. Jeanne Shaheen, whose home state of New Hampshire produces none. They have introduced a bill that would impose economic sanctions against the owners of vessels that participate in the laying of the pipeline under the Baltic Sea. Those owners would be banned from entering the United States and any assets they have in the U.S. would be frozen. One of the cosponsors of their bill is Republican Sen. John Barrasso of Wyoming, also a large gas-producing state.

The sanctions would primarily target Switzerland’s Allseas Group and Italy’s Saipem, two of only a handful of companies with the technical expertise to operate pipe-laying vessels.

On May 22, the House Foreign Affairs Committee unanimously approved a bill by U.S. Rep. Denny Heck (D-Wash.) that calls on the secretary of state and the director of national intelligence to work to stop construction of Nord Stream 2 and to apprise Congress of their efforts within 90 days of the bill’s enactment. It calls for diplomacy, not sanctions.

Former President Barack Obama also opposed construction of Nord Stream 2, but he did not impose sanctions.

Jens Mueller, a spokesman for the Nord Stream 2 project, said in an e-mail that, “We are aware of the ongoing debates, but do not speculate about potential U.S. sanctions.” He suggested, though, that the companies working on the project would not be deterred by U.S. objections.

“Western European energy companies from Austria, Germany, France, the U.K. and the Netherlands have committed to invest almost €1 billion each in the project, and more than 670 companies from 25 countries work on it,” Mueller said. “This has led to thousands of jobs and economic growth across Europe. All of these companies are fully committed to seeing the project completed. It is progressing according to the schedule.”

Czech President Miloš Zeman said in an interview with the Czech News Agency in Prague that he saw “no reason whatsoever” why the “big brother on the other side of the ocean” should intervene in the Nord Stream 2 project. He said the price difference between getting natural gas from Russia through a pipe and shipping it from the United States was “too big to ignore.”

To sell U.S. natural gas to the EU, American energy companies have to transport it via pipeline to a liquefaction facility at or near a major shipping port, then load the LNG onto a tanker and ship it across the Atlantic to an LNG terminal in Europe, where it would be returned to gaseous form.

Charlie Riedl, executive director of the Center for Liquefied Natural Gas in Washington, said there was enough demand for natural gas in Europe to sustain pipelines and LNG imports. U.S. LNG already “is going to Europe in great volumes,” he said.

Gazprom intends to maintain a “35%+” European market share in Europe through 2035, according to a paper written for Central Europe Energy Partners. That will allow Russia to stay positioned as Western Europe’s main gas supplier but will leave room for alternatives, such as LNG.

During the first quarter of 2019, France, Spain, Italy and the U.K. were among the world’s largest importers of U.S. LNG, according to the U.S. Energy Information Administration.

Owing to increasing demand from those and other EU countries, in part due to rapidly diminishing natural gas production in Western Europe, “Europe is the number one destination” for U.S. LNG exports, Riedl said. “The number is growing, and it really depends on seasonality now.”

During the winter months, when demand is high, “LNG is absolutely competitive with pipeline gas” in Europe, he said.

Russian pipeline gas is less expensive than imported U.S. LNG, but how much less expensive is difficult to determine, in part because different units of measurement are used for each type.

But if the United States wants to compete with Russia for national gas market share in Europe, it should put its money where its mouth is by investing in European gas infrastructure projects, according to a May 2018 report by Rice University’s Center for Energy Studies.

“We envision U.S.-funded investments in strategic gas import infrastructure as a way to help surmount the barriers currently posed by local political-economic structures, friction between national security and commercial priorities, and the EU’s lack of authority to effectively and directly impose gas market reforms within member states,” wrote the report’s authors, Gabriel Collins and Anna Mikulska.

Neither of the anti-Nord Stream 2 bills pending in Congress, however, authorizes any money to help European countries further develop their gas infrastructure. 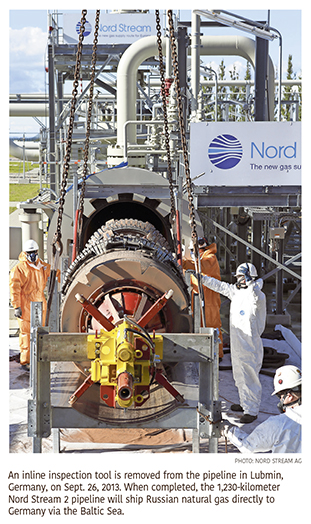 Germany, for example, has no LNG regasification terminals and does not import any LNG. It gets more than 50 percent of its natural gas from Russia via the existing Nord Stream pipeline. When Nord Stream 2 comes online, it will get more than 80 percent from Russia.

German Chancellor Angela Merkel has acknowledged the political risk of being more dependent on Russia for natural gas, but she said Nord Stream 2 was economically necessary, nonetheless.

“If we stop using nuclear and coal energy, we have to switch to using gas as a source ofenergy. This is why I have always said that the Nord Stream 2 pipeline should be built, apart from transit through Ukraine,” she said on June 4.

Because Nord Stream 2 will bypass Ukraine, it will allow Gazprom to cut off its gas supply to its archenemy without affecting Germany or Western Europe. It has done so several times already, most recently in March 2018, when frigid winter weather makes gas for heat a necessity. The government closed all schools in the country.

In each case, Gazprom said it was turning off the gas because Ukraine hadn’t paid enough for it. Gazprom is the sole stockholder in Nord Stream 2.

“Gazprom’s pipelines to Europe were recently decried as of doubtful commercial value by Russian experts,” said Constanze Stelzenmüller of the Brookings Institution in a December 2018 report. “But geopolitically, they are hugely useful tools of control and coercion.”

On the flip side, Western Europe would no longer be affected by gas-related disputes between Ukraine and Russia. Moreover, Russian President Vladimir Putin is determined to complete the project, even if it means Gazprom has to foot more of the bill.

In the end, practical considerations are likely to trump political reservations. More than 1,000 kilometers of the 1,230-kilometer pipeline have already been laid down in the Baltic Sea. With natural gas production declining, Western Europe needs cheap gas — and another pipeline in the mix would reduce the cost of natural gas. Moreover, because it is 2,000 kilometers shorter than the existing Ukrainian route, Nord Stream 2 is the quickest way to deliver Russian natural gas, further keeping prices down for consumers.

Finally, with Trump attacking Germany throughout his presidency, there’s also an element of national pride and sovereignty, especially after Trump reportedly told Merkel that she’s “got to stop buying gas from Putin.”

“Questions of European energy policy must be decided in Europe, not in the U.S.,” German Foreign Affairs Minister Heiko Maas said earlier this year. “To impose unilateral sanctions against Nord Stream 2 is certainly not the way to go.”

John Brinkley is a freelance writer in Washington, D.C.