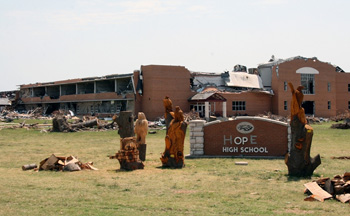 After an F5 tornado ripped apart one-third of Joplin, Missouri, on May 22, killing 160 people, the city’s high school lay in twisted ruins. On the school’s battered sign, only the letters “O” and “P” remained — but shortly after the historic twister, the letters “H” and “E” were scrawled in, and Joplin High School became Hope High.

The wreckage still stands behind the sign, but the 2,200 high school students are moving on. Three months after the tornado that damaged or destroyed nine of the system’s schools, including its only high school, Joplin officials kept their ambitious promise that the school year would start on time and students have been relocated to makeshift buildings while the massive reconstruction effort gets under way.

Joplin High School in Joplin, Mo. was destroyed by an F5 tornado that hit the city May 22. The letters on the sign were blown off in the storm and someone has since used tape to spell out the word “hope” with the remaining letters left on the sign. The carvings were made from storm-damaged trees and placed on the school’s lawn.

The district has tapped $30 million in state and federal financing to reopen buildings that survived or rent new space and bring in special modular classrooms. Donations have also poured into Joplin — even from places as far removed from Missouri as the United Arab Emirates.

On Aug. 9, the UAE Embassy in Washington announced that the government was donating $500,000 to provide each Joplin high schooler with a personal laptop computer, part of a “One-to-One” initiative with Joplin Public School (JPS). In addition, the embassy has issued a challenge grant in which it will match, dollar for dollar, any funds donated to its One-to-One initiative, up to an additional $500,000, which would bring the total UAE contribution to $1 million.

The idea for the gift emerged after UAE officials read about the school system’s challenges in an Associated Press news article. (After Hurricane Katrina, the UAE donated $100 million toward U.S. relief efforts.)

“The entire world was touched by the devastation caused in Joplin by the May 22 tornado. Given the scale of the disaster, including the destruction of the community’s only high school, we felt it was important to provide assistance,” said UAE Ambassador Yousef Al Otaiba. “The One-to-One initiative is a truly innovative idea that will not only give current students the tools they need to start the school year, but position future JPS students on the cutting-edge of learning.”

Students will be enjoying their sleek new Apple notebooks in an unlikely setting: a shopping mall. That’s because Joplin High School has reopened in the local mall, right by Macy’s and Sears, in a former big-box store that was refitted over the summer and will serve as their base for the next three years while construction for a new school — on the same plot of land as the old one — breaks ground next summer.

Despite the temporary lack of permanent classrooms, the One-to-One initiative aims to give students all the tools they’ll need to succeed.

“We are so fortunate to have the support from the UAE Embassy. This donation will help us reach our One-to-One Laptop Initiative goal and provide a truly interactive learning experience for our high school students,” said C.J. Huff, superintendent of Joplin Schools. “This contribution will not only provide technology to Joplin High School, but also help prepare our students for 21st-century jobs.”

Anna Gawel is a managing editor for The Washington Diplomat.