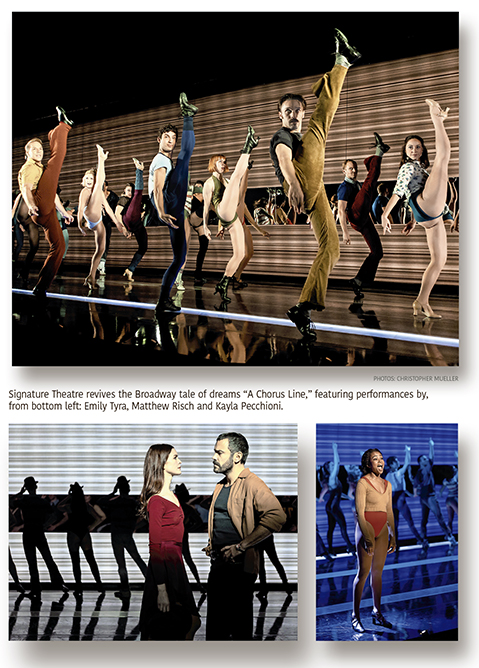 “A Chorus Line” is a classic tale of hopes and dreams — some realized, some squashed, others fleeting. It’s because of this timeless theme that we can forgive the dated feel of the 1970s Broadway musical that took place in a world where dancers wore thigh-high leg warmers, parents were stunned when their effeminate sons became drag queens and male directors were blatantly sexist and personally intrusive. Wait, back up. That last bit might be more current than we had previously thought (Harvey Weinstein, anyone?)

The Signature Theatre — renowned for its ability to dust off old standards and make them shine — lives up to its reputation in spades for this production.

The story is a touching one. Seventeen dancers vie for a coveted space in a Broadway chorus line during a grueling audition in which they not only must perform new choreography, but also must tell their demanding director about their personal childhood stories that led to them becoming dancers.

The play’s only structural downfall is that the opening song and dance number — a technically difficult, aggressive jazz piece called “I Hope I Get It” — is so powerful that the remaining production struggles to compare.

Signature made the bold decision to veer from the original, iconic choreography that Michael Bennett made famous during the play’s initial smash run in 1975 and tapped Denis Jones to rework it (with permission from Bennett’s estate). Jones’s fast-paced choreography is daunting and the dancing so proficient that it wows and completely overtakes the audience.

To add to the dancers’ difficulty is the fact that the bare stage is narrow, and the long-limbed performers must maneuver tightly through a series of high kicks, multiple turns and dramatic leaps. If during the number your heart doesn’t melt, it will at the finish when the hopefuls hold up their black-and-white headshots over their faces. Through this profound silent gesture, we see the arbitrary competitiveness of show business. After their display of extreme physical exertion and years of dance preparation and perfection, in their desperation for a job on the chorus line, they are reduced to a two-dimensional moment in time.

Director Matthew Gardiner’s decision to place the mostly callous chorus line director (Zach, played by a handsomely bearded Matthew Risch) embedded in the dark audience adds to their agony. We hear his booming voice around us bark at the dancers and we wince.

Although much of the self-deprecating humor told by the dancers when asked about their pasts is now cliché (over-the-top exaggerations about growing up in the Bronx and woeful tales of not being good in sports), some of the jokes still work, such as, “I wanted to kill myself, but realized that suicide in Buffalo, N.Y., was redundant.”

Although there are no slackers in this production, there are a few standouts. Emily Tyra, who plays Cassie, Zach’s past love interest, shines in her lithe solo “The Music and the Mirror,” while she begs him to let her in the chorus line after a faltered career as a soloist. The lighting design, by Adam Honoré, in this number adds another layer of drama to an already gripping display of desire.

The raw talent of Richie, played by a chiseled Phil Young, explodes as he dances and sings about his circuitous career path that first led him to winning a scholarship to become a kindergarten teacher. Even in numbers involving the entire company, his voice rings out over the others.

Although she doesn’t have a solo, Corinne Munsch, as Judy, has exquisite dance lines and a seductive lure. Meanwhile, Adena Ershow, as Val, is delightful in the iconic “Dance: Ten, Looks: Three” — more commonly known as “Tits and Ass” — where she defends her decision to choose plastic surgery after repeated rejections because of her looks.

“Tits and ass won’t change your life unless they’re yours!” is one of the funnier one-liners belted out in this piece.

All the songs are memorable, but especially poignant is “What I Did for Love,” when the dancers answer the painful question, “What will you do if one day you can’t dance any more?” Crooned out with passion by the feisty Diana (played by Samantha Marisol Gershman), she and the company sing, “Look my eyes are dry.… The gift was ours to borrow,” claiming they don’t regret following their dream, even it’s only short-lived.

There are few nuances in “A Chorus Line,” where the uncovering of young artists’ private demons and dreams are laid bare for the taking. One could fault the show for lack of sophistication and, at times, corniness. But in the end, this is the charm of the long-running musical. To witness unadulterated emotion without the filters of Instagram or Twitter is scarce in today’s world and should be gobbled up any chance we get.