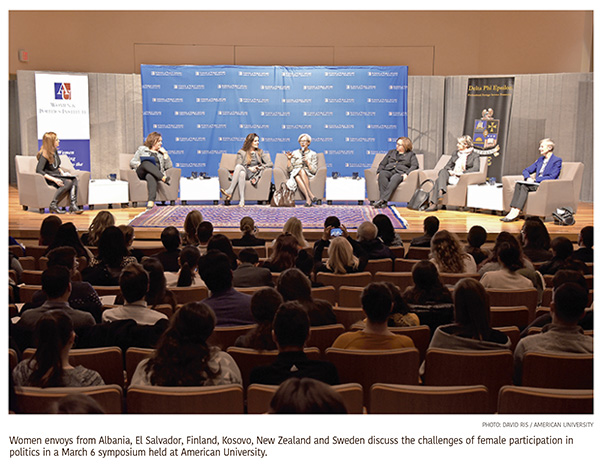 In 1954, New Zealand legislator Mabel Howard waved at the mostly male members of Parliament (MP) two large pairs of women’s underwear — both of which were marked as being the same size but weren’t — to demonstrate why clothing sizes in the country needed to be standardized.

Howard’s demonstration was surprisingly successful. Although her demand was opposed by clothing manufacturers, she received tremendous support from other legislators and standardization of clothing soon became law.

This wasn’t the first time Howard had won a battle of this magnitude. In 1946, she became MP for the second time by winning as much as 75.2 percent of the vote. She was only the fifth female MP since Parliament was established in New Zealand in 1854. And in 1947, she became the country’s first woman cabinet minister; she was made minister of health and minister in charge of child welfare.

Howard’s was a success story in terms of women’s participation in politics in New Zealand, but hers was a rare one and not the norm on the island nation, or in many other countries.

“New Zealand was the first self-governed country to give women the vote — in 1893. But until 1919, women couldn’t even contest elections,” said Rosemary Banks, New Zealand’s ambassador to the U.S., who narrated the account of Howard waving “bloomers” in Parliament at a panel discussion on March 6 at American University, ahead of International Women’s Day.

Banks and five other women ambassadors to the U.S. led the talk on women’s participation in politics in their countries. The accounts of the ambassadors of Albania, El Salvador, Finland, Kosovo, New Zealand and Sweden were bittersweet. When compared with 50 years ago, they all said that a lot more women are in politics now — especially in Finland, New Zealand and Sweden — but the numbers are still nowhere near as high as that of men in similar positions and roles. And a lot remains to be done to change society’s mindset on the role of women outside the home.

The biggest obstacle, the women said, are stubborn societal norms and patriarchal traditions that often can’t imagine women in political roles or, worse, can’t fathom why women should be in such positions at all. The top diplomats said these attitudes are sometimes internalized by women who then become their own worst enemy. Or, in some cases, attempts by women to engage in politics leads to down-and-dirty fights with the establishment — a necessary but often-brutal battle.

In El Salvador, for example, there’s a big disconnect between what people feel and how they act, said the country’s ambassador, Claudia Ivette Canjura de Contento.

She noted that newly elected El Salvadoran President Nayib Armando Bukele Ortez has yet to announce any female appointments to his government. “While in [opinion] polls, as much as 85 percent of respondents say there should be more women in politics, in elections, for example at local mayoral polls, only 12 percent women were elected,” she said. “People feel only men can be in such roles.”

She said her country — which for years has been plagued by poverty and drug violence — needs to work with all citizens, including younger generations, to convince them that women’s participation in politics is key to development.

Even in Sweden, where roughly half of the government is comprised of women, there hasn’t ever been a woman head of state. This, in a country that performs a “gender analysis” on almost every issue and “in more cases than you can imagine,” said Swedish Ambassador Karin Olofsdotter.

In fact, Prime Minister Stefan Löfven declared that Sweden has become “the first feminist government in the world,” which means that gender equality is central to all government policies. Yet Olofsdotter, who is the first woman to serve as Sweden’s ambassador to the U.S., finds it somewhat ironic that “it takes a man to declare a feminist government.”

Why is this the case?

“We don’t see women in top posts. People don’t perceive women in top positions. Among listed companies, only 8 percent are women chief executives of these companies,” said Olofsdotter. As for having a female prime minister, “we will see one. I just don’t know when,” she shrugged.

“If you don’t see women in top party positions, people think women can’t be party leaders,” said Kauppi, adding that only three out of nine party leaders in Finland are women. “We had a woman as president for 12 years,” she said, referring to Tarja Halonen, who presided over the country from 2000 to 2012. “But in today’s government, only 35 percent of ministers are women and there’s a lot of criticism about it.”

For Kauppi, the issue goes beyond numbers. “I’m mentioning these numbers because it’s an explanation … that is, for one to see women in politics, it is also important to retain visibility,” she said.

One important way to address the underrepresentation of women in politics is education, said Albanian Ambassador Floreta Faber.

“We have to educate boys and girls to respect each other and believe and accept equal rights for each other. This is a long-term approach that is necessary” not just for political participation, she said, “but even for issues like domestic violence and trafficking, two big problems in Albania.”

For Vlora Çitaku, Kosovo’s ambassador to the U.S., fighting for women’s rights means just that — fighting hard to be heard and counted.

“People say women are soft power, but let me tell you, I’ve seen women fight in parliament. I was in the first parliament of Kosovo and the youngest one there. I’ve been in fights and seen them,” she said.

Çitaku recalled one time mentioning that, “We may have a woman president one day.” She said she was laughed out of the room and told she was “too ambitious” to even think that.

“Guess who laughed back four years later? We had our first woman president and she was the first woman to be head of state in all of Southeast Europe,” said Çitaku, referring to Atifete Jahjaga, who served as president from 2011 to 2016.

While Kosovo does have a quota system whereby 31 percent of parliament members must be women, Jahjaga did not need to rely on the quota system, given that she overwhelmingly won the approval of MPs.

Quotas in general are a divisive issue, including mandatory quotas for women in government. Those who support them say they are necessary to overcome decades of entrenched inequality, while opponents argue that they crowd out — or at least are perceived to crowd out — more qualified candidates.

Of the six countries represented at the panel, Albania, El Salvador and Kosovo have quotas, while Finland, New Zealand and Sweden don’t. 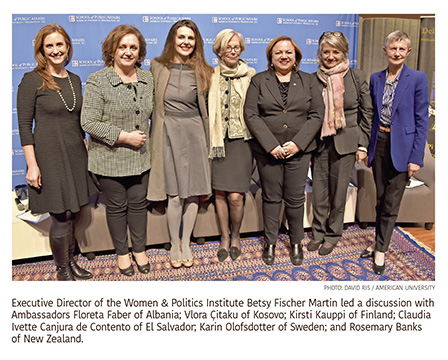 The ambassadors of the three countries with quotas said they are a necessary catalyst to boost the numbers and visibility of women in government.

“Quotas have played a crucial role in raising awareness in society for the need for women in decision-making roles,” said Çitaku. For El Salvador’s Contento, while she respects quotas as a process, she said the positions that women take on issues is just as important as the number of women in positions of power. “Quality is as important as quantity.”

And in Albania, quotas are important to “show examples of women in power,” said Faber. “They may not be a perfect candidate, but it gives courage to other women. Since quotas were introduced, the numbers of women joining politics independently have risen,” she said.

Kauppi, on the other hand, said she feels it’s important not to have mandatory quotas in elected bodies or in the corporate world. “Some companies have gone in for self-regulation and aim for 30 percent of their boards to be women. And many have achieved it. This is a good middle ground,” she said.

New Zealand’s Banks had an interesting take on the issue. When asked about quotas on the sidelines of the discussion, Banks said she started off against the idea but has now come around to seeing some merit in it.

“I was opposed to it because it risked a backlash from others who would say, ‘Women are only here because of quotas,’ and it would undermine women’s authority and talent. We have to win respect, I thought; we can’t command it,” said Banks.

Lately, though, Banks has realized the benefits in setting aside seats at the table for women, saying that quotas “serve a purpose” in elevating women’s visibility and inspiring other women to vote or enter politics themselves.

Today, while there are still only roughly two dozen women ambassadors in Washington, their visibility is slowly but surely increasing. Çitaku joked that at least this fraternity of female envoys has elevated its prestige enough to become part of a popular WhatsApp group called “Woman Power.” Hopefully in time, that popularity will continue to grow to the point where “people power,” not “woman power,” becomes the new norm.

Shailaja Neelakantan is a freelance writer in Washington, D.C.