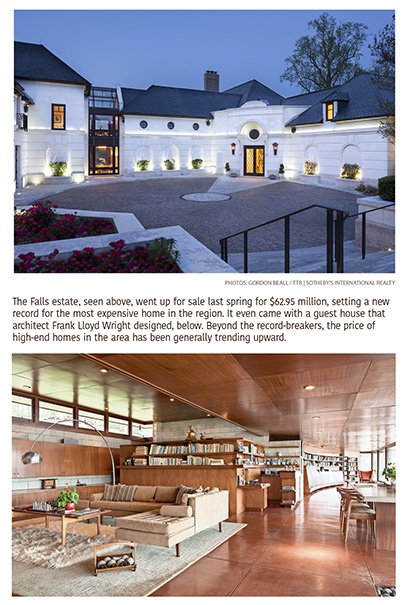 Those of us who pay rent or mortgages in the D.C. metro area don’t have to be told that things can get pricey here. But “pricey” is going to a whole new level. Properties with price tags of $23 million and even $62 million are redefining high-end living for area real estate.

When a 48,900-square-foot residence previously owned by AOL co-founder James Kimsey went up for sale last spring for $62.95 million, it set a new record for the most expensive home. It has features such as an infinity pool and 30-car garage, plus a guest house that architect Frank Lloyd Wright designed.

In 2017, another AOL co-founder, Steve Case, sold his Merrywood estate on the market for $49.5 million. The 23,000-square-foot home, built around 1919, was the childhood home of Jacqueline Kennedy Onassis. The seven-acre property has indoor and outdoor pools, a lighted tennis court and nine bedrooms, to name a few amenities. It sold last May for $43 million — a record at the time — to the Embassy of Saudi Arabia.

Driving these digits is the influx of not just political figures but industry ones, too. “We’re starting to see some bigger money come here, like Jeff Bezos, for example,” Taylor said. Last year, the Amazon founder paid $23 million for the biggest house in D.C., a 27,000-square-foot property that used to be the Textile Museum (which he’s currently renovating and expanding for a price tag of $12 million).

Bezos announced last November plans to build a second Amazon headquarters in Crystal City, Va., and all eyes have turned to how that could affect the housing market. (In February, Amazon announced it was pulling out of the second headquarters location in New York City after local protests, although the decision will have no impact on the Crystal City move.)

Since then, home searches from technology hubs nationwide into Crystal City spiked over 700 percent, according to real estate firm Trulia. The biggest concentration — 33 percent — of HQ2 employees will likely live in Fairfax, with Arlington coming in second at 16.4 percent and D.C. third at 13.2 percent, according to a report by the Stephen S. Fuller Institute at George Mason University.

The influx of 25,000 highly skilled workers, many making six-figure salaries, is likely to push up home prices — and possibly push out middle- or low-income residents. Already the D.C. region is the fourth most expensive city in North America, according to The Economist. When Amazon set up shop in Seattle, home prices surged to double the national average between 2010 to 2017, according to Metrostudy data.

But experts caution that the arrival of the retail giant to the nation’s capital won’t necessarily cause home prices to skyrocket. For one thing, those additional 25,000 jobs will be spread out over a decade or more, and any price hikes are likely to be gradual. The Trulia report, for instance, noted that while there was a significant uptick in home searches since Amazon’s announcement — with real estate agents already touting the move to entice buyers — home prices had to yet to show any discernable increase.

Long & Foster, which set up a website for National Landing — the name Amazon gave to the HQ2 area — predicts that the so-called Amazon effect will add 3 percent to the appreciation the Washington housing market would otherwise experience, WTOP’s Jeff Clabaugh reported in December 2018.

“I think there’s a general enthusiasm, and no one expects that suddenly hundreds of buyers are lining up to buy and compete for things, but there is enthusiasm that over the next couple years there will be stability and growth there at a new level, and not just for the Amazon people but for all the necessary support and ancillary type of things that come in from it,” Taylor told us. “I think the tide’s coming in and as they say, all boats will float.”


The exact impact HQ2 could have on the luxury market remains to be seen, but this area has become a destination for many people in the tech industry and they tend to be younger with more disposable income, Taylor added. “I think we’re primed for that.” 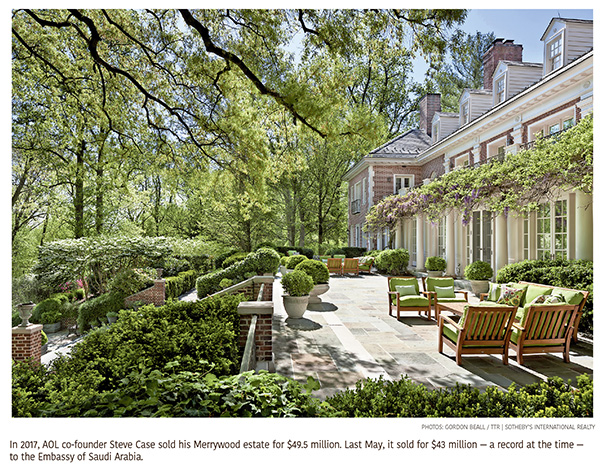 In the second quarter of 2018, the average luxury price point for D.C. proper was $2.54 million, up 0.6 percent year-over-year, but up 24 percent since the second quarter of 2010, according to real estate brokerage Redfin. In McLean, Va., the average luxury price point for the quarter was $3.97 million, followed by $3.15 million in Chevy Chase and $2.56 million in Bethesda, Md.

What’s more, there’s no sign of a real estate market slowdown in the metro area. Washington home values have risen 5.9 percent in the past year and will rise 5.6 percent within the next year, according to Zillow. D.C. ranks second in the country for the number of millionaires per capita, while Maryland ranks fourth and Virginia ranks 10th, according to Phoenix Marketing International’s annual Phoenix Wealth & Affluent Monitor survey.

“We were this stale, conservative town where nobody wanted to know what kind of money they had for the longest period of time throughout our history, and I think over the last six or seven years, as major corporations have moved in and more political power has come to Washington, I think you’ve seen people who had money in other places are now moving to Washington with it, and they don’t mind showing it.” 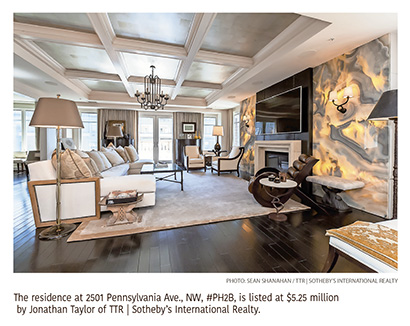 For comparison, in 2013, when Anastasia sold a 15,625-square-foot mansion on Chain Bridge Road in McLean for $12 million behind a home that former Secretary of State Alexander Haig had owned, it was among the largest sales in the region at the time, he said.

That house had something in common with the AOL co-founders’ homes: They all sit on what has become known as McLean’s Gold Coast, an exclusive stretch of land where most homes overlook the Potomac River and few sell for no less than $5 million. Dwight Schar, founder of NVR Inc., a homebuilding and mortgage company, sold his Gold Coast mansion, situated next to Merrywood, for $35 million in 2017.

Buyers are “typically the people who are seeking to influence government in different ways — the defense contractors, the heads of industry,” Anastasia said. “There’s very few homes along that Gold Coast, but they seem to go very quickly.”

The arrival of the Trump administration has also helped drive up costs and demand for so-called showcase properties up, Taylor noted.

“It was a flurry when the new administration came a year and a half ago,” he said. “They were newcomers to the area, and they were all very wealthy, and there were sales in D.C. of $12.6 million, $10.7 million to these guys, and we don’t see a lot of things over $10 million in the District.”

Some members of the president’s team didn’t wait for homes to go up for sale, he added. “Several of those were just identifying a seller who wasn’t on the market but just trying to find the right property. People said yes [to selling,]” Taylor said.

Traditionally high-end areas such as Georgetown, Kalorama, Massachusetts Avenue Heights and Potomac continue to thrive. For instance, Robert Allbritton, founder of Capitol News Co., bought a 19th-century Georgetown home for $24.56 million in 2007; Evermay, a 217-year-old mansion with a library and parking for 100 cars, sold in 2011 for $22 million; and the Embassy of Kuwait bought Fessenden House in 2015 for $18 million.

But high prices are turning up in surprising spots, too, Anastasia said. For example, he recently served as the listing and selling agent for a 25,000-square-foot home that sold on May 29, 2018, for $4.1 million in Fairfax County, Va., just west of the Fairfax County Parkway. The 13-year-old home sits on almost 3.5 acres and has a guardhouse, eight bedrooms, four finished levels, an indoor pool with a retractable roof, an indoor squash/racquetball court and a screening room. 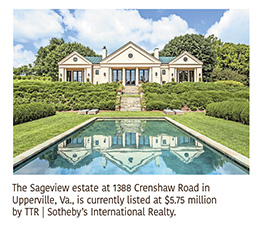 And high prices are turning up in more recently developed areas, such as Loudoun County, Va. Take the $22 million sale in 2007 of Llangollen Farm, which broke records at the time, and a $13.5 million home in Bluemont currently listed on Zillow.

Still, the D.C. area is reasonably priced compared to other areas. The luxury price point for the second quarter of the year in Beverly Hills, for instance, was $18.24 million, and Miami Beach’s was $9.5 million.

“We’ve had a couple that are reaching those levels, but generally our market is far, far more affordable than those,” Taylor said. “It’s also more stable. We don’t have the big highs and lows that you’ll find [elsewhere].

“There’s a lot of enthusiasm here for the lifestyle in D.C., compared to these other metropolitan areas with the big numbers,” he added. “We’re seeing a lifestyle that’s more complete now as the city is evolving with The Wharf and everything near Nats Park.”

These ultra high-end prices are still fairly new to D.C., Anastasia told us. “It’s still eye-popping. There’s only five or so homes in Virginia sold above $10 million every year,” he said.

The challenge now is keeping up with the new Joneses, Anastasia said. “The biggest problem we’ve had — and this is what we’ve seen — is new, available, high-end inventory to meet the need of that client base has been pretty much nonexistent except in D.C.,” he said.

It’s a basic issue of supply and demand. One way he’s seeing the demand being met is through infill, or the building of bigger homes on lots where smaller, older ones once stood. Another is through the expansion away from D.C. toward areas like Loudoun County and Great Falls in Virginia and more northern destinations in Maryland.

Challenges aside, the luxury home market, which includes those priced at $1 million or more, may have seen its share of ups and downs but it remains relatively stable. Within D.C. itself, the luxury home market saw the number of sales increase by 8.7 percent, while median sale prices fell by 1.5 percent in the third quarter of 2018, according to Long & Foster’s Quarterly Capital Region Market Report.